Photos and text by Sally Kneidel 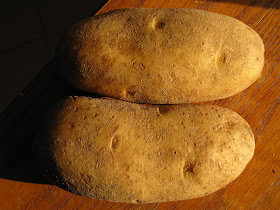 On my weekly shopping jaunt yesterday, I was irked to find the grocery store was out of organic baking potatoes. Frustrating. I was planning to have them for supper last night, and I already had the vegan chili beans for a topping.
I thought about it for a minute - how could a vegetable that's underground be sprayed directly with pesticides? The nonorganic potatoes must not be that bad, I thought. So I bought them instead.

After I got home, I remembered an article my daughter had e-mailed me entitled, "The 7 foods experts won't eat." I pulled the article out of my file and....dang, sure enough, #4 was "Nonorganic potatoes."

I was dead wrong
I was definitely mistaken about underground veggies being relatively safe from pesticides.  As it turns out, root vegetables absorb herbicides, fungicides, and pesticides that have washed into the soil. So these chemicals are not just on the vegetable's surface, they're absorbed into its flesh. Washing and peeling can't get rid of them.

Because potatoes are the nation's most popular vegetable and demand is so high, potato plants are sprayed at every opportunity to keep the spuds blemish-free. During the growing season, the potato plants are sprayed with fungicides... which wash and seep into the soil.  At harvesting time, the vines are obliterated with herbicides to get them out of the way. More seepage down to the taters.  After the potatoes are harvested, they're sprayed directly with a chemical to keep them from sprouting. And they usually won't sprout, even if you try to get them to. (Although I have sprouted a few conventional potatoes.)

Potato farmers won't eat them!
Said Jeffrey Moyer as chair of the National Organic Standards Board, "I've talked with potato growers who say point-blank they would never eat the potatoes they sell. They have separate plots where they grow potatoes for themselves without all the chemicals."

The only solution is buying organic potatoes, or growing your own. If you're desperate, peeling may help somewhat....at least with the sprout-inhibiting chemical.

Buying organic protects wildlife too
Remember - when you buy organic, you're protecting not only your own health, but the health of the wildlife and ecosystems adjacent to and downhill from those farm fields. When crops are sprayed, so are the soil insects and worms, which are eaten by frogs and birds and lizards....the toxic sprays move right along the food chain, poisoning the whole system. And that includes the streams and lakes and rivers downhill from the cropfields. Rains flow across the sprayed fields and into these surface waters...as well as ground and well water.

So looks like I'll be taking those icky taters back to the store.  Now, we did have some organic sweet potatoes on hand last night. I wondered briefly how those would taste with chili beans.  Quickly nixed that idea.

Instead we decided to saute some portabellos in a little olive oil with some fresh rosemary, a sprinkle of toasted sesame oil, and a  splash of tamari.  We put each portabello on a big slice of rosemary-olive oil bread with melted soy mozzarella on top. Had a salad on the side. Now that was tasty. 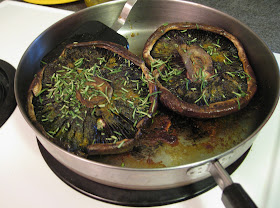 Portabellos with rosemary for dinner