Hunting may threaten orangutans even more than habitat loss 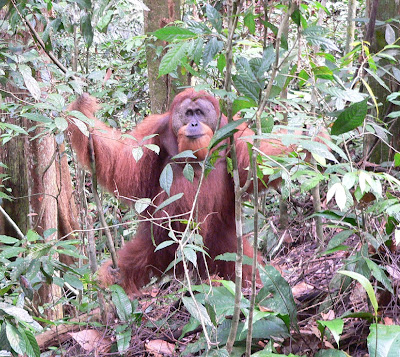 [See bottom of this page for list of my previous posts about orangutans.]
Most people are surprised to learn that unlawful traffic in wildlife and wildlife parts is the third biggest criminal activity in the world, after drugs and arms. The illegal hunting of great apes is so pervasive that it may threaten their survival even more than habitat loss does. Habitat loss is rampant these days, due to human population growth....so I wouldn't have believed that hunting could be an even bigger threat until reading a recent paper by Vincent Nijman (and 5 other scientists). Nijman is a scientist at Oxford Brookes University, a consultant to TRAFFIC, and has published numerous research papers on orangutan conservation.  He and the other authors of this particular paper collected convincing data that suggest orangutan populations have been reduced more by hunting than anything else. 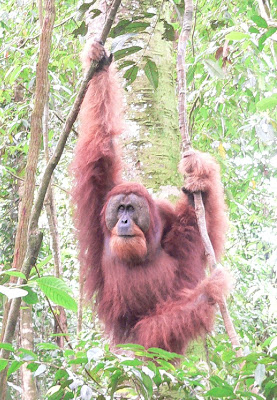 I crisscrossed Indonesia and Malaysia looking for orangutans

I was on the islands Borneo and Sumatra a few months ago, searching high and low for wild orangutans. That was my main reason for going to Southeast Asia.  I had researched sites carefully in advance and I chose my destinations accordingly; consequently, I was lucky enough to see a number of wild orangutans in undisturbed forests. But as Dr. Nijman writes, "Bornean orangutans currently occur at low densities and seeing a wild one is a rare event." In contrast, historic collectors like Alfred Russel Wallace in the 1800s saw many orangutans daily and "were able to shoot continuously over weeks or even months."  Clearly, orangutans are much rarer today than they were in the past. That's true not only of orangutans, but also for the other great apes.


Chimpanzees and gorillas are hunted for meat

I saw on the "Planet Green" network on November 24 a one-hour documentary about an investigation into the hunting of chimpanzees and gorillas for bushmeat in Cameroon. The investigator, Steve Galster, said these two apes are popular meat because they're so big and fleshy relative to other remaining wildlife. The primary reasons they're shot or trapped is to eat them, to sell their meat to neighbors, or to transport the meat by train or car to city markets. But when baby animals are captured after shooting the mother, the babies can be shipped abroad to be sold as pets. So killing a mother ape is doubly profitable. 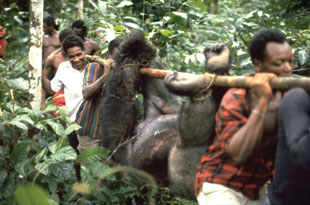 Gorilla carried out of the forest. Photo courtesy of United Nations' Food and Agriculture Organization

I was impressed with the diligence of the filmmakers for this Planet Green show, which featured an undercover sleuth (a local woman) equipped with a tiny concealed camera visiting a local man who was trying to sell a baby chimp. The chimp was eventually confiscated and sent to a sanctuary. Even at the sanctuary, though, young chimps are vulnerable to theft in order to sell them. The demand for them is huge. 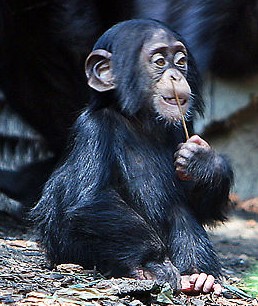 Having a baby chimp is a social asset, the narrator said - something to show off no matter where you live. I can imagine that. There aren't many things in life more interesting than a living baby ape. In this Planet Green documentary, the poachers and smugglers who were caught on film all wound up going free, through "negotiations" (bribery) or police who failed to show up in court, or officials who took pity on impoverished poachers and their children.

The research of Vincent Nijman (and 5 colleagues) into the hunting of orangutans on Borneo was published in the online journal PLoS ONE in August, 2010. The researchers used "encounter rates" to measure the density of orangutans over the last 150 years in a variety of different habitats on Borneo. Their data came from hunting accounts, museum collections, and field studies. By the researchers' calculations, the number of Bornean orangutans has declined about 6-fold since the mid-1800s. The convincing aspect of their data is this: If large-scale deforestation and forest degradation caused the decline, then we would expect to see a sudden decline after the 1960s and 1970s, "coincident with major intensification of [deforestation] during this period." However, encounter rates declined steadily for at least 120 years before major deforestation began. Furthermore, say Nijman et al., although orangutan numbers do generally decrease following habitat disturbance, they manage to survive in high densities in some areas that have been heavily disturbed or even clear-cut and planted with monoculture plantations. Nijman et al. also noted that local orangutan extinctions or historical declines have occurred in the same areas where we know orangutans have been heavily hunted. 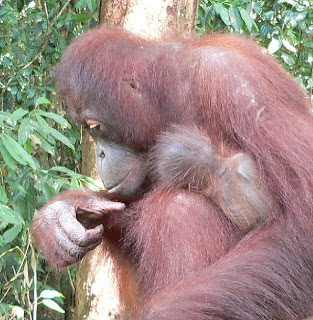 Mother and infant orangutan on Borneo.  Photo: Sally KneidelFor example, orangutans have long been extinct in upland areas of Borneo where poor soil prevents farming - areas that were historically populated by nomadic humans forced to rely on hunting. In contrast, freshwater and peat swamp environments were mostly not inhabited by people until the 19th century, but were densely populated by orangutans. The PLoS ONE paper sites many other examples of hunting-related distribution patterns of orangutans. In eastern Sabah (a state in Borneo), roving bands of head-hunters provided a refuge for orangutans and other wildlife, because other humans were afraid to enter the area. That refuge ended when head-hunting was banned.

Nijman et al. conclude that hunting has been underestimated as a key causal factor of orantugan density and distribution, and that orangutan population declines have been more severe than previously estimated based on habitat loss only.


Why do people still hunt orangutans?

The red apes, among our closest relatives, are still hunted for food or traditional medicines, as agricultural pests, for trophies, and more recently, for the pet trade. When I was in Southeast Asia in June and July, I visited the wildlife markets of Jakarta, where vendors openly flaunt wildlife-protection laws that are seldom enforced. There I was offered pet orangutans, along with many other supposedly protected primates, protected birds, and even a baby jaguar. Many told me they were carrying on a family business that had been handed down by their fathers. For more about my time in the Jakarta markets, see this post.

Trapping, shooting, eating, and selling wildlife are long-held traditions in forest cultures. Solutions must involve enforcement of local laws protecting forests and wildlife, and enforcement of penalties. That's something that's not happening right now in developing countries. But it must if orangutans, gorillas, chimpanzees, tigers, and thousands of other species are to survive this century. Many organizations are busy, on site, trying to make it happen. In Southeast Asia, TRAFFIC and Greenpeace are working hard to turn things around.

Support some of the NGOs who are making the most progress in protecting orangutans from illegal hunting and trade and who are fighting to protect Southeast Asia's remaining forests from destruction.


These are some of the best:

Greenpeace International
TRAFFIC: the wildlife trade monitoring network
ProFauna (an Indonesian NGO that helped me in Jakarta by providing a local guide to go with me to the markets)
World Wildlife
ForestEthics
Rainforest Action Network
Earth Pulp and Paper


My previous posts on conservation in Southeast Asia:

Some of my previous posts on wildlife smuggling around the world:

Some of my previous posts about deforestation:

I have read about how endangered animal trading etc is a huge business. Where I read it, it said that its the second largest illegal business in the world, but either way, it's awful. When I read about it, it was about a man from China who does trade in exotic butterflies. As I'm sure you know, this affects more than just orangutans. There needs to be much stronger punishments for those caught in the illegal animal trade business.

Your blog has inspired me so much!!! Not to mention the help it has given me with my school work :) 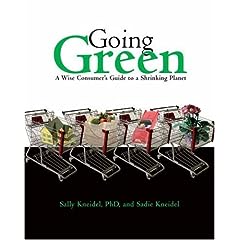