Are you an oatmeal fan? I am. I even eat it for supper when we're too busy to cook.

I came across these yummy oatmeal recipes that really change it up, from 'Dark Cocoa Raspberry Oatmeal' to 'Chocolate Strawberry Oatmeal Smoothies'.

Take a look at the other 11 oatmeal recipes at this website. 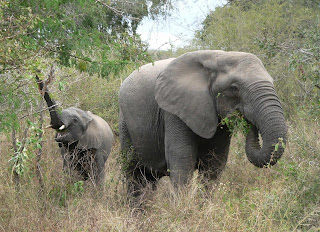 African elephants feeding, Kruger National Park. Photo: Sally Kneidel
Male lions are deadly predators. A single male, alone, can bring down an elephant calf. Females can't do it alone - more than one female lion is needed to attack any elephant successfully. So, from an elephant's perspective,it pays to be able to tell who's on the prowl - a male or female lion, and how many. 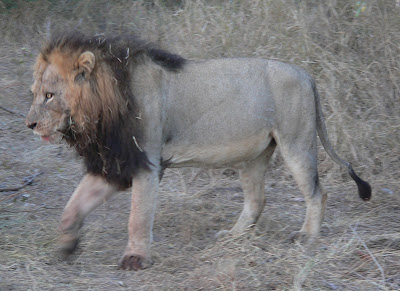 Male lion fresh off a kill (note blood on lower lip), South Africa. Photo: Sally Kneidel
Karen McComb and her team from the University of Sussex in Brighton, England, played lion calls to 39 elephant families in Kenya's Amboseli National Park. They compared the elephants' reactions to the lion roars. All the matriarchs reacted to the sound of three lions roaring with more agitation and avoidance than the sound of one lion. But the older matriarchs showed an additional awareness - they could tell not only the number of lions, but the gender of the lions, and respond to the different threats accordingly. McComb's research will be published in an upcoming Proceedings of the Royal Society B.
Females over 60 are best judges of predatory threat
The researchers concluded that an older, more experienced leader would be likely to make a more accurate assessment of the relative danger from nearby lions(s). A young and aggressive leader can be an able defender, even though lacking the accumulated social and ecological knowledge of an elder. A combination of a young aggressive leader and an older experienced matriarch may be the ideal combo to head up a pride of lions.

Sadly, poachers often target bigger and older elephants. This practice poses a more serious threat to the elephants than would the poaching of younger individuals. The repercussions of poaching older elephants has broad implications, far beyond predatory threats. Elder elephants also model appropriate social behavior to younger adults and adolescents. The loss of elders can lead to out-of-control behavior in young rogue males, which have been documented behaving destructively and overly-aggressively. Their asocial behavior has included the rape of rhinoceros species.

For more information on conservation of African and Asian elelphants, and how you can get involved in protecting elephants from poaching, see the following websites:
TRAFFIC: the wildlife trade monitoring network
IFAW.ORG on African Elephants
International Elephant Foundation
Elephant Conservation
WWF - Elephants

Some of my previous posts about the illegal trade in wildlife
Africa's big mammal populations drop 59% in 40 years! 1/13/11
308 rhinos killed in South Africa this year for their horns 12/16/10
The tiger in the suitcase: an isolated incident? 9/28/2010
Wildlife trade rivals drug trade in profits 9/20/2010
Laws flaunted: flourishing pet trade threatens orangutans' survival 8/23/2010
My search for a wild orangutan in Borneo and Sumatra 8/16/2020
Orangutans dwindle as Borneo, Sumatra converted to palm plantations 8/03/2010 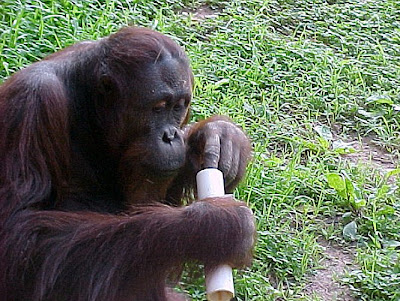 Photo showing an orangutan engaged in the TUBE task. Photo used with permission of the researcher  William Hopkins.
Mmm, love that peanut butter
Apes are right-handed or left-handed, just like us. Not a big surprise, since they're our closest evolutionary relatives. A research team led by William Hopkins of Agnes Scott College recently tested 777 captive apes  - orangutans, gorillas, chimpanzees, and bonobos. Each ape was given a PVC tube 15 cm in length and 2.5 cm in diameter, with peanut butter smeared in both ends. The peanut butter was too far inside to reach with their mouths. The apes had to hold the tube with one hand and reach inside with a finger of the other hand. The researchers recorded which hand the apes used to reach inside for the peanut butter.  Each ape was tested on 2 to 4 occasions, in solitude if possible.

Only the orangs were left-handed
Orangutans turned out to be the only southpaws. The majority of gorillas and chimps are right-handed, as are 90% of humans. Bonobos showed no significant handedness at the population level. Hopkins believes that handedness at the population level in apes may be a result of ecological adaptations associated with posture and locomotion (personal communication with Hopkins).  He plans further research to try to understand why orangutans are left-handed, while other apes and humans are right-handed in general. It may be somehow related to the fact that orangutans are the most arboreal of the apes. 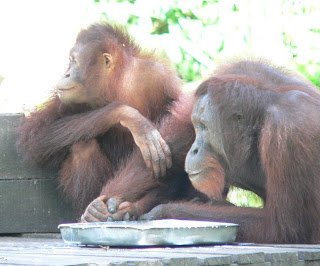 Orangutans at a sanctuary on Borneo, drinking milk. Note that they're holding hands!  Photo: Sally Kneidel
Handedness in crows too
Apes are not the only nonhumans to display handedness.  In 2007 I wrote this post about research by Gavin Hunt of the University of Auckland, who documented handedness and tool-making in New Caledonia crows.

For further reading on primate conservation and behavior, and my observations of wild orangutans on Borneo and Sumatra, check out some of my earlier primate posts:

The Meaning behind "Earth Hour"

During the last Saturday of March each year between 8:30 and 9:30 p.m. people and businesses around the world pledge their support to reducing environmental impact by turning off their lights. This year, that date was March 26, and approximately 134 countries did their part by pulling the "off" switch, which plunged some of the world's most iconic structures into temporary darkness. The Petronas Twin Towers in Malaysia disappeared from the night sky. The Eiffel Tower in France completely winked out. The Burj Kalifa in Dubai, the tallest tower in the world, seemed to suddenly vanish into thin air. All of this reminded people that the impetus for environmental change is everywhere, but that only through collaboration can the planet be saved.

Earth Hour began four years ago in Sydney, Australia, where 2.2 million people and more than 2,000 businesses shut off their lights for an hour to demonstrate their commitment to environmental change. Since then, the message of Earth Hour has gone global. Unlike many other demonstrations for change, Earth Hour is also a celebration. Many participants in Earth Hour throw parties, showing that doing something to help the planet does not have to be all work and no play. As only non-essential lights are turned off, such as building lights and room lights, public safety is not a concern as long as participants stay aware of their surroundings.

This year's Earth Hour was a success with some of the world's largest cities taking part, including New York, Hong Kong, Toronto, and Moscow. Yet, it was the 2010 Earth Hour that remains the event's most successful year. In 2010, approximately 4,616 cities, towns, and municipalities took part in Earth Hour, and about 1,551 iconic landmarks went dark as well.

Yet, despite all of Earth Hour's accomplishments, there have been critics. These critics typically claim that the hour-long absence of lights does not make a difference in terms of energy consumption and its effects on the environment, and this claim is undeniably true. In the grand scheme of things, turning off lights for one hour every year does not make much of an impact. However, this annual event is not about turning off lights to save power. Instead, it is a symbol of environmental change rather than an act of environmental change. It allows communities and businesses to come together for an easy and visually stunning representation of what it means to use less in order to give more back to nature.

By-line:
This is a guest post by Mariana Ashley, a freelance writer who particularly enjoys writing about online colleges. She loves receiving reader feedback, which can be directed to mariana.ashley031 @gmail.com.