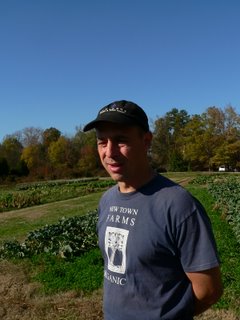 Picture of Sammy Koenigsberg of New Town Farms in Waxhaw, NC. Sammy is featured in Veggie Revolution.
Last night I went to my first meeting of folks in the Charlotte area who are interested or working in sustainable farming. It was a big turnout, really exciting! Most of the folks were organic farmers or farmers using sustainable, eco-friendly methods, or farmer wannabes. Tony Kleese and Amy from the Carolina Farm Stewardship Association were there and led the meeting. (Their number, in Pittsboro, is 919 542-2402.)

The general consensus was that the market in Charlotte for organic food and for CSAs is just beginning to pop. A CSA (stands for community-supported agriculture) is a small farm with local customers who sign on for a year, and pick up a bag of the farmer's produce every week. Most of the CSAs at the meeting said they have a waiting list of customers who want to participate.

Part of the reason for the surging interest in organic and eco-friendly, pesticide-free food here is the recent location of Johnson & Wales University to downtown Charlotte. It's a major cooking school and is having a big impact on the food community around here. They're very strong supporters of local, seasonal, organic food and the people who produce it.

We talked about distribution problems, and how to connect organic-minded consumers with the growing number of producers. So many people in Charlotte and the surrounding area are interested in local and organic food but can't find it. Although we do have a new Earth Fare natural foods supermarket, as well as Talley's Green Grocer and Berrybrook Farms Natural Foods. Soon we'll have a second Earth Fare and a Whole Foods Market.

A lot of the farmer wannabes at the meeting said they want to grow organic produce in the city, to make distribution within the city easier. We talked about a future where consumers can buy organically grown food on every street corner in the city. Availability is key, and we need to work on that. The producers are here and growing in number, so are the consumers. The possibilities are endless! Yay!!! It gives me hope for the future.
Posted by Sally Kneidel, PhD at 10:05 AM