Greasel or Straight Veg: Cars that Smell Like Tacos and Doughnuts 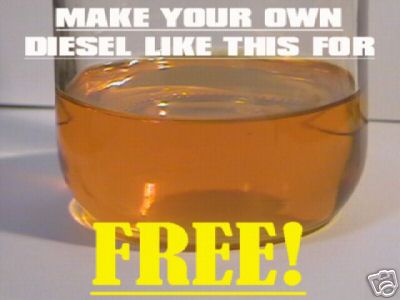 Thursday night Sara Kate and I met some folks from the Very Vegetarian Society of Winston Salem, at our Earth Fare presentation in Greensboro (NC). They have a well-done and useful newsletter, with recipes and articles on nutrition, and a webpage at www.veryvegetarian.ws. They told us about the North American Vegetarian Society, www.navs-online.org, and the annual Summerfest organized by NAVS. They go every year and love it. Sounds interesting.

We interviewed a couple of people from Chapel Hill the next day, for the new book. We're working on the section now on eco-friendly cars. Talked to a woman named Kim who bought a conversion kit for her diesel Subaru so that her car can now burn vegetable oil as fuel, instead of the petroleum diesel most Subarus use. Now that she has the conversion kit on her engine, Kim could buy vegetable oil from the grocery as a fuel for her car, but that would be very expensive. So she, and a growing number of other grass-roots environmentalists, are filling their tanks with used vegetable oil that is discarded by restaurants. It's called greasel or "straight veg" by those who use it.

The cool thing about greasel is that it's free and guilt-free. It's a subversive, non-taxable, non-polluting fuel that's not dependent on our Middle East affairs to keep the supply flowing. Greasel is a true do-it-yourself fuel that frustrates the government and industry folks who want to get in on the action in some way. I like the recycling aspect; Kim is re-using oil that will otherwise be thrown away. She picks up her used oil from a restaurant in Carrboro - they save it for her. It's a Mexican restaurant, so her car smells like tacos and burritos when she drives. If she got her oil from a doughnut place, then her car would smell like doughnuts. Could be worse!

Greasel, also called "straight veg," is not the same thing as biodiesel. Biodiesel is a vegetable oil that has been chemically altered, so that a conversion kit is not necessary for your car. You save money on the conversion kit, which can be pricey, but the downside is that biodiesel is not as easy to find as straight vegetable oil. I've been told that there are only about six biodiesel stations in North Carolina. Not sure if that's true. Plus, biodiesel is expensive - more than $3 per gallon. In some places, owners of diesel cars are pooling their resources and forming coops to make their own biodiesel, or bring it in from somewhere else.

But before you get too excited - remember that to use either greasel or biodiesel, the car must have a diesel engine. Since only 3% of new American cars are diesel, that cuts out most of us.

We're also learning about ethanol as a biofuel for gasoline engines. Cars can be modified to use a fuel that's 85% ethanol, which cuts way down on harmful tailpipe emissions and greenhouse gases. But more on that later.
Posted by Sally Kneidel, PhD at 10:23 PM

Hey! I liked reading your post...i'm currently saving $ to convert my 84 diesel mercedes to run on waste vegetable oil but first i'm taking a journey to india to do some volunteer work so its hard to save $ for both. I'm interested to see what you're going to say on ethanol, because I took a class in college last year in which I learned that ethanol would be a great alternative, but to manufacture it on a large scale would use more oil than its worth...something like 2 barrels oil to 1 barrel ethanol, which blows because that would be a cool alternative.

I think you should mention the guy who invented diesel and why diesel cars can run off veg oil...because before diesel was made with petroleum, diesel was peanut oil! thats why its so easy to convert them. Also, when you install the conversion kit you have to install a whole new fuel tank, which converts, heats and makes the veg oil usable (because it solidifies easily) and when you start a veg car you are actually starting it on diesel because without diesel you cant have the combustion action which starts the engine.

Alright, sorry for writing so much....its just really exciting to know that I CAN actually do this, and know how it works...a lot of people think that there is no way for them to not be dependent on cars, but they need to know that by even supporting someone else's change they are making a difference (my car currently pollutes more since its still diesel, but i usually bike or walk anyway).

Good luck with your blog!