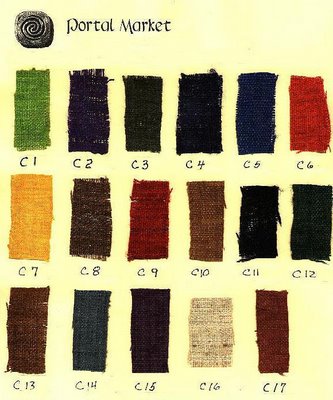 The picture shows hemp swatches. I've been researching hemp clothing for the new book. Just how eco-friendly is it? By all accounts, it's much better than conventionally grown cotton, the most pesticide-intensive crop in the world. I've been wondering though, if hemp is so great, how come most of the hemp-clothing vendors online don't promote their clothing as organic? I got the answer today. I called a major hemp vendor in California; his web site sells hemp clothing and other hemp products. He reminded me that it's illegal to grow hemp in the US, because it's technically the same plant as marijuana. I knew that, just forgot. Hemp however is from a variety of Cannabis that is useless as a mind-altering substance, because it contains hardly any THC. The hemp vendor I called told me that virtually all the hemp sold in the US is grown and manufactured into textiles in either China or Romania. I told him I had just seen the video "Wal-mart: the high cost of low prices" about Chinese sweatshops. I told him I was leery of any clothing manufactured in China. He said he'd been to one of the factories that produces his textiles. What was it like?, I asked him. It was "just a regular factory" he said. I didn't think to ask him about wages or hours per week on the job - those are two things that define sweatshops. Plus child labor and dangerous working conditions. I should call him back. But anyway, he pointed out to me that fabrics grown and manufactured outside of the US are not going to be certified organic by the USDA, because the USDA certifiers are not in China and Romania.

He said even though hemp is not certified organic, it is earth-friendly. My reading has corroborated this. Hemp just doesn't have the voracious insect pests that are attracted to cotton, so pesticides are not needed. At least, they're not needed as much.

I asked him about bamboo fibers. Of course, I expected he might have a biased answer, since he sells hemp clothing and hemp other stuff. But I thought he might also have something interesting to say. He did. He said bamboo is not a natural fiber like hemp or cotton because there is no usable fiber in the bamboo itself. Rather the bamboo is ground up and treated with chemicals that turn it into a liquid. Then the liquid is shot out from something like a showerhead. The extruded streams of liquid harden into the fibers that are woven together to make bamboo fabric. Hmm. Didn't know that. That's not necessarily bad, unless the chemicals are bad. Need to research that, call some bamboo fabric vendors. See what they have to say about that. The plot thickens...

I've discovered in my perusal of various sources this week though that bamboo is grown in China and woven into textiles in China. Just like hemp. Now wait a minute! I don't want to wear clothes made in China! After the "Wal-mart: the high cost of low prices" documentary about abusive labor practices and sweatshops in developing Asian countries, I don't want anything produced there. So we're back to cotton. Organic cotton. Cotton uses a lot of land, even organic cotton. But....at least some of it is made here in the US. I need to research more about wages and working conditions of cotton laborers in the US. And I need to read about linen from flax.

But you know what the best answer is to the "green clothing" dilemma. Buy vintage clothing. I get most of my clothes from thrift stores. Three-fourths of used clothes wind up in the land-fill, so if I'm buying used stuff, I'm pulling it right out of the waste stream. I'm not supporting sweatshops or environmentally damaging practices.

I'm lucky though, we have a couple of really good thrift stores in my town, where the clothes are in good shape and easily accessed. The best one is run by AmVets.

I've heard that the processing of bamboo and even hemp can be chemical-intensive, too. That's something I'm going to research in detail for my online project (speaking of which, I just realized that my last comment probably sounded like a spammer's. But I'm not! Really!)

At first my reason for searching out organic cotton was medical.

At only a few weeks old my son developed severe eczema and his pediatrician suggested organic cotton as an alternative to the harsh steroidal creams they wanted to put him on.

The search for organic clothing was not easy, and just plain expensive, but I knew his baby skin could not take the harsh chemicals used in regular textiles.

The more research I did, the more I knew our entire family needed to make a change, for us and the planet.
That was when I founded Peaceful Disorder, and since it is a family adventure, the prices are very reasonable. ($12-$30)

You will probably see the same products in your local boutique for twice as much, I know I did.
But best of all, after about 6 months of wearing organic, our baby has no sign of eczema.

Using organic cotton prevents insecticides and pesticides from being sprayed in the air which saves our atmosphere.
Organic Bedding