I too find kittens charming.

But the bald truth is that housecats in the U.S. are an invasive species, in the same sense that kudzu, Gypsy moths, and the Chestnut blight fungus are invasive species.

Housecats easily meet all of these criteria. The domestic housecat is not native to the US. These cats originated from the European and African Wild Cat, Felis sylvestris. The European colonists brought them to the U.S. and their numbers have been increasing ever since - from 30 million in 1970 to 60 million in 1990, to an estimated 90 million now. That rate of increase is far greater than any native animal on the continent. Unaided populations of native wild animals just don't multiply like that.

So they're introduced from elsewhere, their numbers are increasing at a rapid rate, and they are most definitely doing environmental harm. Housecats are a major source of wildlife mortality in the US, according the the US Fish & Wildlife Service, the American Bird Conservancy, and numerous university studies. Nationwide, cats kill more than a billion small mammals and hundreds of millions of birds each year. Many of these are native songbirds and mammals whose populations are already stressed by other threats, such as habitat destruction, development, and pollution.

Domestic cats worldwide have been involved in the extinction of more bird species than any other cause except habitat destruction, according to research from the University of Maine.

Some of the best-documented examples: housecats are endangering populations of least terns, piping plovers and loggerhead shrikes. In Florida, marsh rabbits in Key West have been threatened by predation from domestic cats. Cats introduced by people living on the barrier islands of Florida’s coast have depleted several unique and native species of mice and woodrats to near extinction.

But I hardly need to look at research journals to find documentation. I need only to look out my front door, my back door, my side door. Every day I find my neighbors' cats stalking animals in my yard. Nearly every day I find at least one of them trotting home with an animal in its mouth. We've taken down all of our bird feeders, because they were only luring prey in for the neighbors' cats.

If it weren't for the cats, I think we'd have more of the hawks and owls, which we would enjoy. But the well-fed cats take the best of the prey.

If you have a cat, please keep it indoors at all times. The Humane Society asks you to, and they like cats. They point out that free-roaming cats have a life expectancy of less than 3 years, while indoor cats live an average of 15-18 years. Two-thirds of vets recommend keeping housecats indoors at all times, for the cats' protection from cars and disease, as well as for the sake of wildlife populations.

A 2006 paper by ecologists in Wisconsin lists a number of resources and other papers that will be useful to anyone researching this topic. 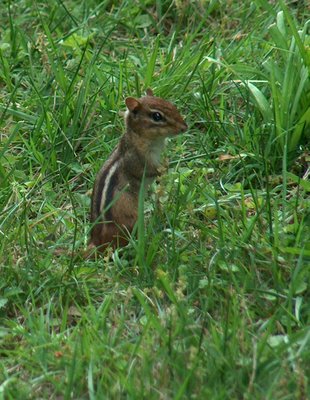 Thanks for writing this! I had no idea cats were such a problem, this article has taught me to take better care of my cat.