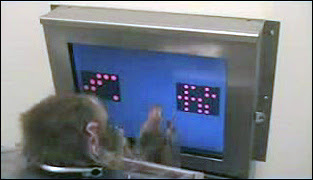 Yup, monkeys have been shown to estimate as well as Duke college students, in tests performed at Duke University's Primate Center. The tests measured what is sometimes called "fuzzy math." Neither students nor monkeys were given enough time to apply verbal skills, or count, so the tests measured a more primitive aptitude for quick visual estimates.

To find out how monkeys' fuzzy math stacks up against humans', primate researcher Jessica Cantlon tested two female rhesus monkeys named Boxer and Feinstein (after the senators). The monkeys watched a video screen.

When Boxer and Feinstein were right, they got Kool-Aid. They were right about 75 percent of the time.

Cantlon then gave Duke students the same exact task, rewarding them with cash instead of Kool-Aid. They were right about 90 percent of the time — not a lot better than the monkeys.

If the students had been given more time, they would have done much better, Cantlon said. They would have added the dots to arrive at exact amounts.

"When you take away language from a human during a math task like this," Cantlon said, "they end up looking just like a monkey. You see these remnants of these more primitive mathematical abilities that are still kicking around in humans."

Cantlon said monkeys are probably good at making quick estimates because they may need to assess quantities in a hurry — like whether they're outnumbered by an enemy. Or if the number of fruits in a tree warrants a return trip.

Cantlon said young children probably do something very similar before they learn formal arithmetic. The results of the study appear in the journal Public Library of Science Biology.

In the journal article, the authors conclude that monkeys perform approximate mental addition in a manner that is remarkably similar to the performance of the college students. These findings support the argument that humans and nonhuman primates share a cognitive system for nonverbal arithmetic, which likely reflects an evolutionary link in their cognitive abilities.