A make-shift home on Peru's Pacific coast (click on any pic to enlarge it)
I was leery of the "desert coast" south of Lima. What kind of place to live could that be, with no plants of any kind? What kind of wildlife could we see? It sounded like a moonscape! Bleak!

I live close to the Carolina coast with its maritime forests, or what's left of them - Palmetto trees, gnarly oaks draped with Spanish moss, Southern bayberries sheered by ocean winds. I love the stalky "sea oats" that anchor our white dunes.

What would a barren seashore look like? I imagined a dull and empty gray beach stretching on and on....

As it turns out, I was all wrong. Parts of Peru's southern coast are devoid of plants, but the lack of rainfall doesn't affect life in the ocean. In fact, the marine life offshore is unusually rich and diverse. That's because of Humboldt currents in the area that bring nutrients up from the ocean floor. Plankton feed on the nutrients, fish eat the plankton, and hundreds of oceanic and coastal birds and marine mammals feed on the fish. We knew there would be coastal birds, but were pleasantly surprised by the diversity of birds and mammals. Even Andean Condors venture to this coast during the sea-lion birthing season. As scavengers, the condors feed on the afterbirth left on the beaches.


Below: a Peruvian Pelican,
flourishing on the abundant fish offshore 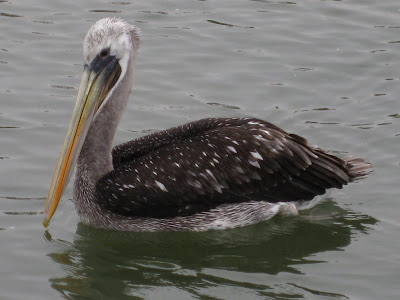 Once we'd decided to check it out, our first challenge was how to get there safely?? We'd planned to take a bus south along the PanAmerican highway from Lima to Paracas, but then heard that these buses are often stopped by bandits, and that the Paracas bus stations are hot-spots for baggage theft. We were advised to hire a driver instead.

On the recommendation of Dr. Devon Graham, director of Project Amazonas, we hired Miguel Quevedo of Lima to drive us. Miguel proved to be a great choice. He drove at a reasonable speed, he was careful, he couldn't have been more attentive to our needs. When we made pit stops, he found out where the bathroom hole was, if any, and whether there were any snacks or drinks to be had. He stopped when we saw birds to identify, or Tyson-style chicken "farms" to gape at, or photos to shoot. When we left the car to track down a bird, he stayed with the car to guard our stuff. He drove us down muffler-scraping rural tracks without complaint, and prevented many potential problems by thinking ahead. To call him from the U.S.: 011.511.9664.1254. Or email our travel agent in Peru, Rosa Vasquez, at reservas@pascana.com; she can call him from Peru for you. 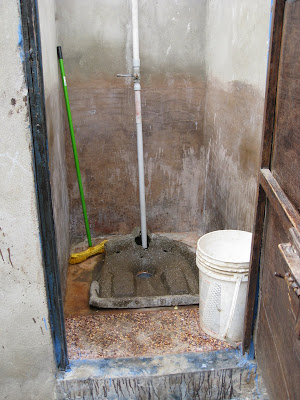 Above: a clean bathroom along the way


The 5 hour drive from Lima to Paracas turned out to be illuminating. About half of Peru's population live in poverty, many in extreme poverty. Political and economic chaos and guerilla activity of the 1980s, during the presidency of Alan Garcia, fueled an exodus from the Andes into the cities, especially Lima. A lack of adequate space and services has created outlying informal settlements known as pueblos jovenes (young towns). We passed dozens of such settlements on the road to Paracas, many of which lack sanitation and electricity. Some are more solidly constructed than others.

Below: informal settlements along the road to Paracas (click on photos to enlarge) 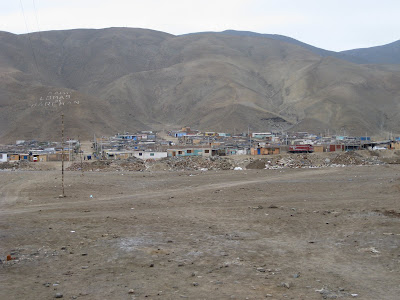 As we drew close to Paracas, we passed through small towns that had been devastated by a major earthquake in 2007. We saw collapsed walls and lingering piles of rubble alongside rebuilt structures. Reconstruction is progressing, but slowly. The earthquake spawned a tidal surge that flooded buildings close to shore, and those left standing bore the evidence - paint was peeling up to 3 or 4 feet on most older buildings.
Our primary destination was Reserva Nacional de Paracas, and the offshore islands Islas Ballestas, which support thousands of breeding oceanic birds. Our friend and travel agent Rosa Vasquez in Iquitos booked 2 rooms for us in the town of Paracas. The rooms were perfect. The little inn is quiet, small, simple, and inexpensive - we were the only guests of proprietor Isabel Coello, who was extremely helpful. The inn (called Paracas Bay) is also her family's home. It is located on Paracas Bay and right around the corner from the wharf where tour boats take off for Islas Ballestas. It's also across the street from a grocery store, and a 5 minute walk from several affordable and good restaurants. For rates and reservations, contact Isabel at bird002@hotmail.com or call 011.56.545082 from the U.S. Our rooms worked out to about $9.25 per person per night. While staying with Isabel, we met her friend Jorge Ibanez Vignolo, an energetic Peruvian birder who lived in California for 10 years, and now runs a kiteboarding business in Paracas Bay. His website is www.kiteboardingparacas.com; his e-mail is jorgeibanezbsc@yahoo.com; phone 011.511.440-2265 from the U.S. 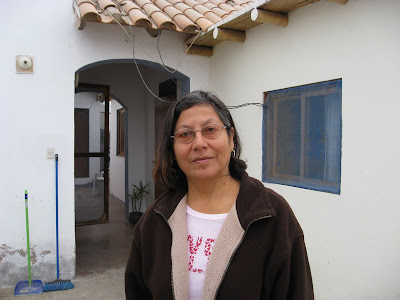 Isabel Coello and her lovely inn, Paracas Bay. Behind the broom you can see the high-water marks from the flooding following the recent earthquake.


Isabel booked our boat tour for us (roughly $10 per person) and the next morning Ken, Alan, and I took off for Islas Ballestas. The tour took about 2.5 or 3 hours, most of which was spent on the boat journey outward and back. Sadie had traveler's digestive distress and stayed behind at the inn with Miguel and Isabel.

Below are shots taken from the boat. We spent an hour cruising around the rocky islands' arches and caves, watching sea lions sprawled on the rocks and thousands of birds: Humboldt Penguins, Neotropical Cormorants, Inca Terns, Peruvian Pelicans, Peruvian Boobies, Oystercatchers, Red-legged and Guanay Cormorants, Surf Cynclodes, and more. 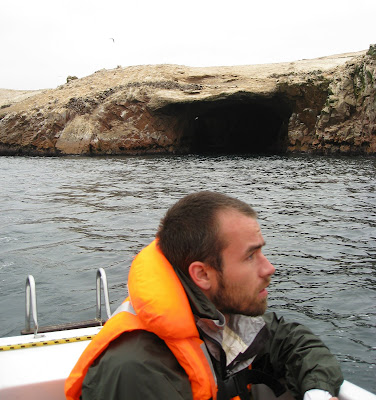 Alan Kneidel searches for rare birds like the Surf Cynclodes from the tour boat.

Pic below: Peruvian Pelicans and Peruvian Boobies perched on ledges. 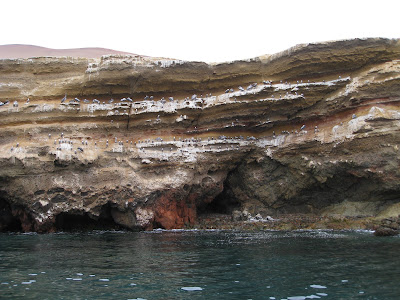 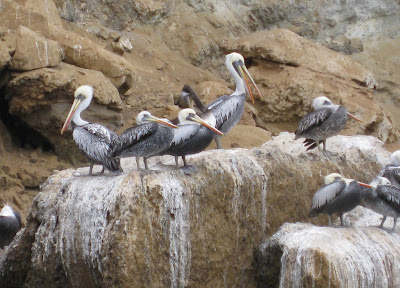 Below, Humboldt Penguins on Islas Ballestas. 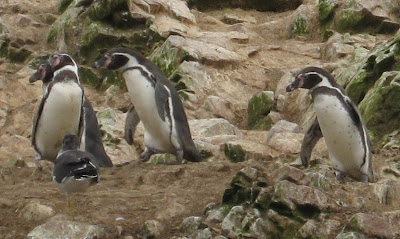 Below, sea lions lounging and socializing on the rocks. 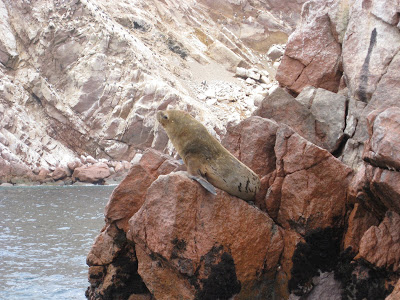 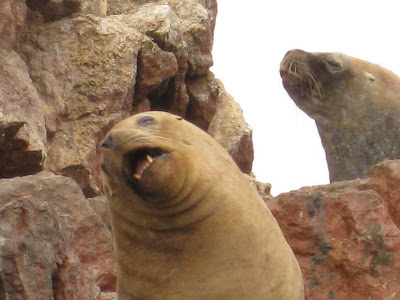 Below: our tour boat approaching a cave on Islas Ballestas 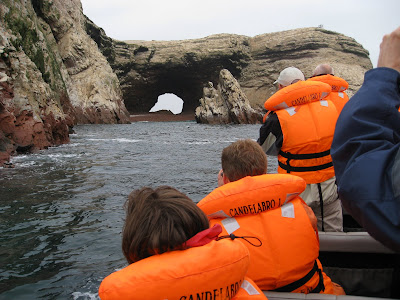 Below: An Inca Tern in one of the caves

Photo below: After we returned from the boat tour, Isabel hooked us up with a professional bird guide, Edgardo Aguilar. He normally charges $80 for a full day of birding, but gave us a reduced rate since we used him for only about 3 hours. His email address is edgardoaguilarh@yahoo.com. 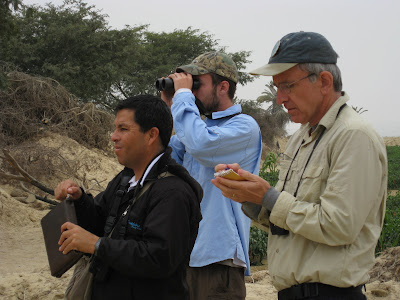 Edgardo (left) showing Alan and Ken the Slender-billed Finch,
in farmland a mile or so back from the water's edge
Edgardo speaks excellent English, is very friendly, and knows his birds. Even better, he's very good at describing exactly where a tiny bird is hidden in the foliage. (Yes, there were plants after we drove a mile or so inland.) I highly recommend Edgardo if you're birding in the Paracas area. He lives in one of the nearby towns - Ica or Pisco - and knows the area intimately. He took us through an offroad agricultural area where we saw Vermillion Flycatchers (my first), Slender-billed Finch, Coastal Miner, Common Nighthawk, Peruvian Meadowlark, etc. and best of all - a colony of Burrowing Owls! 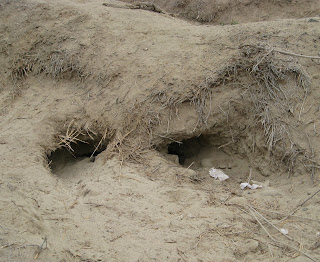 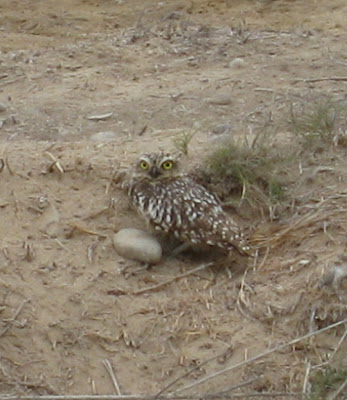 Above: a burrowing owl near Paracas


Below: A child saw us looking at the owls and ran out from her home to see if she could help. She pointed out another couple of burrows to Sadie. 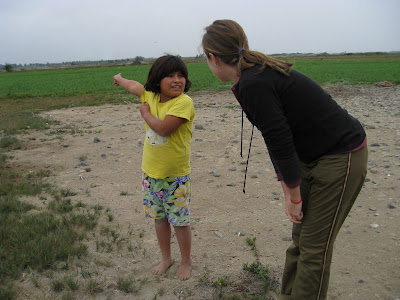 Below, the owls and a lot of the other birds
Edgardo showed us were near irrigated plots
of paprika peppers 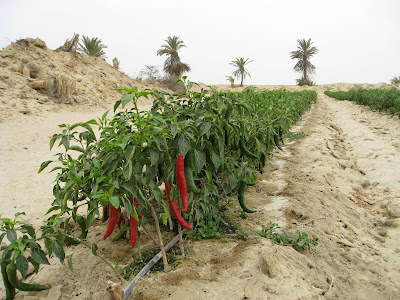 After an early afternoon with Edgardo, we dropped him off at home and tooled away in Miguel's car toward Reserva Nacional de Paracas, just a few miles down the road from the town of Paracas.

The reserve is one of the most beautiful places I've ever seen - with absolutely no plants in sight. 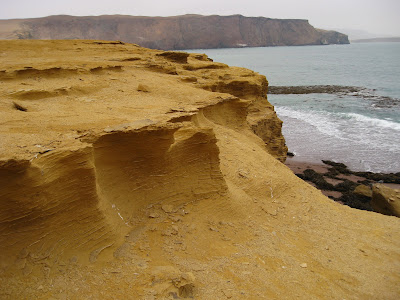 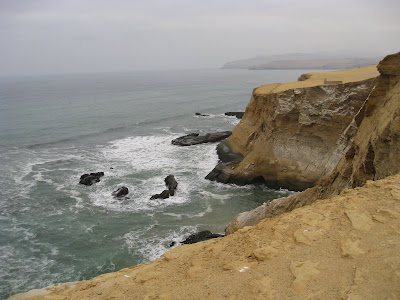 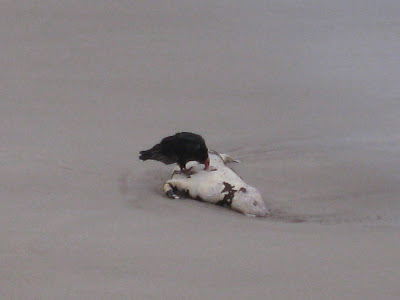 Above: a turkey vulture dines on a seal carcass washed ashore
Below: more shots of the Paracas reserve 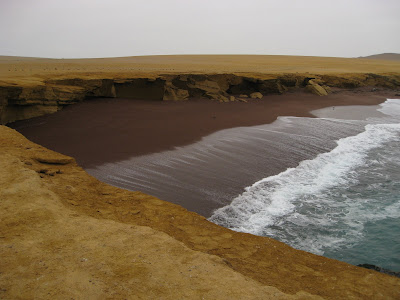 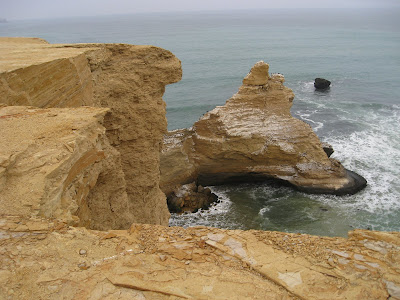 Below: Miguel, Miguel's car, and Sadie at the Paracas reserve 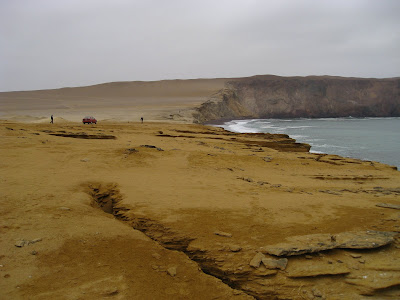 Below, Alan peers over Ken's shoulder at pelagic birds offshore 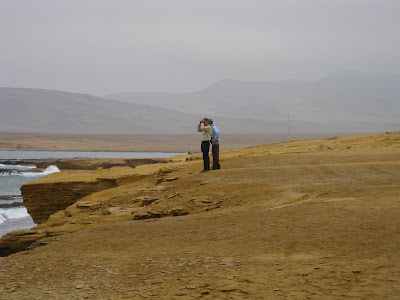 What do you think, beautiful or bleak? I loved the Humboldt penguins on Islas Ballestas - my first penguins. I loved Isabel and Edgardo, I loved the burrowing owls and the little girl who showed us more. I loved Miguel, I loved the stark and haunting coast - the colorful cliffs and hungry birds.

I understand that the area is experiencing a boom in tourism. I'm glad the reserve does actually seem to be protected, and hope the coming development of the adjacent areas can proceed mindfully. The residents could really benefit from more tourist dollars from industrialized nations - mainly, the U.S.

Other recent posts about our travels in Peru:

Deep in the Amazon: the wildlife delivery crew

Careening through the Andes

Rainforest in need: here's how to help

What a great trip. Beautiful photos.

Hey great blog! I really enjoyed reading it, and you guys seemed like you had a great time! I also found a new travel site that you guys might like, baraaza.com