The first monkeys I ever saw in the wild were white-faced capuchins in Costa Rica. Or maybe black howlers were first. But the capuchins were much more charming than the howlers. I fell in love with them. We were on the beach at Manuel Antonio Parque Nacional the first time, and my son Alan had a banana in his pocket. The capuchins were interested in us because of the banana, and they had no fear. The howlers and spider monkeys and squirrel monkeys will stay up in the trees, far away from you, no matter what you have or do. But the capuchins come right down. They even ran out on the beach and snatched things from people's picnic baskets. The capuchins, with their human-like faces and hands, sat in the trees eating bags of crackers and throwing the cellophane wrappers down. 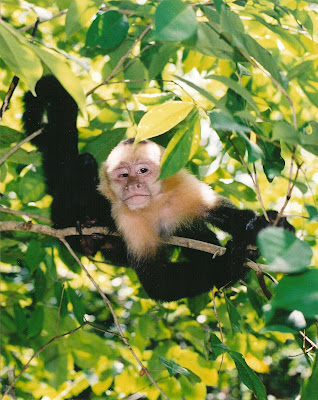 A white-faced capuchin at Manuel Antonio Parque Nacional in Costa Rica, smelling the banana in Alan's pocket
Photo by Sally Kneidel
As a biologist, I know that's not a good thing at all. But yet, I could see myself in the capuchins. I also do what I'm not supposed to do, eat things I know aren't good for me, make choices that endanger my well-being. We were tempted to give the capuchins the banana, but we didn't. We didn't give them anything to eat, we knew better than that. Monkeys that eat human food get sick eventually from malnutrition.

But the next day, we asked the ranger what time the troop of capuchins usually moved through the trees over the beach, on their daily foraging rounds. Our Spanish communication wasn't precise, but he told us and we got the idea. We waited for the monkeys. They came. And they were mad that Alan and I were standing under the trees while they were cavorting from branch to branch, just overhead. The head honcho, a male capuchin, came down and bared his teeth at us and shook the branches to frighten us. We trembled with delight instead.... the pleasure of recalling it even now makes my heart beat fast. We took his photo while he railed at us, infuriated. I was sorry to distress him, but I couldn't help it. Monkeys are territorial, they get angry just like anyone whose space is invaded. It wouldn't hurt him to bare his teeth and shake a few branches. His social stature with his troop may have benefitted from the display. 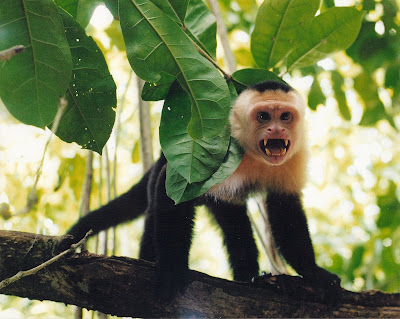 The capuchin was angry that we were standing under the trees in his foraging route. He bared his teeth aggressively.
Photo by Sally Kneidel
Anyway, I started this post to write about a news story that just came out about capuchins. Capuchins used to be "organ grinder" monkeys. These days they're sometimes trained as "helping hand" monkeys for people with paraplegia or quadriplegia. They're very smart monkeys. This recent piece of research shows that capuchins in Brazil are adept at tool use - an ability that used to be attributed only to humans but has now been demonstrated by numerous species from birds to apes. The capuchins use stones to crack open hard-shelled nuts. But the research goes far beyond just demonstrating tool use. The capuchins don't just grab the nearest rock at hand. They select the best tool for the job. Primatologist Elisabetta Visalberghi of the Institute of Cognitive Sciences and Technologies in Rome has shown that these monkeys draw on knowledge of a variety of nuts and stones to select the most effective implement. She studied the monkeys in the wild and observed that they generally approached two or three stones that differed in hardness, size, or weight. In nearly every case, the monkeys chose the most appropriate stone.

"The present findings make capuchins a compelling model to track the evolutionary roots of stone-tool use," says Visalberghi. Because capuchins shared a common ancestor with humans 35 million years ago, Visalberghi feels that their behavior may demonstrate that the capacity for tool use evoloved earlier than thought.

But primatologist Frans de Waal of Emory University has a different interpretation. He says the work highlights the monkeys' capacity for trial-and-error learning, that planning may not have been a part of their tool preferences. The monkeys may be simply applying life lessons about the success of various stones at cracking nuts.

Capuchins in Brazil selecting stones for cracking nuts, from Wired Science
Whether their discriminatory skills are the result of planning or of learning, they're still a step beyond simple tool use. They demonstrate in a non-human animal the ability to select and apply an appropriate tool for a particular job. We humans are not so unique after all. Do we really deserve to claim the whole planet all for ourselves and crowd out every other species of animal, leaving only the pest species, the livestock, and the companion species? I hope not. I hope the capuchins will always be alive and well in Costa Rica and Brazil, not displaced by cattle pastures.