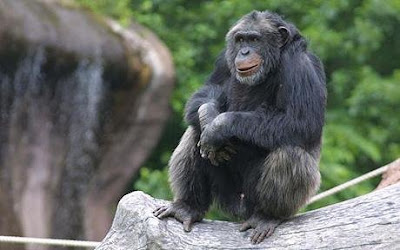 Santino the angry chimp is famous. You can google his name and find dozens of stories about him, in science journals and popular media.

It's not his anger that's making him famous, but how he plans ahead for his fits of rage.

Santino, a 30-year-old resident of the Furuvik Zoo in Sweden, has been observed collecting and stockpiling stones in his enclosure to use as future weapons. Later, when zoo visitors get on his nerves in a big way, he grabs stones from his cache to hurl at the annoying voyeurs!

He has also been observed tapping the concrete rocks in his enclosure to identify the weak parts, then dislodging a piece. If the chunk is too big to throw, he breaks it into smaller pieces.

The newsworthy part of this story is not that Santino makes tools; we have abundant documentation of primates and birds making tools, mostly as food-gathering implements.

The remarkable feature here is that Santino is planning for his future outbursts of temper.

Planning is a cognitive ability generally attributed only to humans. Or at least, we have little verifiable evidence of planning in non-human animals.

You might say that a squirrel's stashing nuts for winter is evidence of planning, but it's not necessarily. It's more likely that squirrels instinctively stash nuts as day length begins to shorten, since young squirrels who have never experienced a winter still do it.

True planning shows that an animal is considering what its future feelings will be at a later time.

As it turns out, Santino, as the dominant chimp at the zoo, has been storing and heaving stones over the moat at visitors for at least 11 years. Zookeepers have found and removed hundreds of Santino's caches of stones over the years. Fortunately for visitors, chimps throw underhanded and have terrible aim, so no one has been seriously injured by these "hailstorms" of aggression. And the stones are directed only at zoo visitors, never at the other chimps.

Scientist Mathias Osvath of Lund University says "These observations convincingly show that our fellow apes do consider the future in a very complex way. It implies that they have a highly developed consciousness, including lifelike mental simulations of potential events.....he first realizes that he can make these and then plans on how to use them. This is more complex than what has been showed before."

For me, Sally, it means that once again we have evidence that humans are not so unique after all. And so, I believe we should stop hogging the world's land and resources for ourselves, and stop fouling the remaining green spaces and waterways with our effluvia. We do not deserve dominion over the scraps of wild habitat and resources that remain. 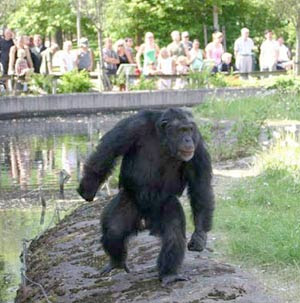 Santino the chimp with stone in hand, photo courtesy of www.cbc.ca

"...it means that once again we have evidence that humans are not so unique after all."

How sad, isn't it? Now it's evident that human beings aren't the only species who have the capability to commit premeditated, and non-instinctual, violence.

This opens the door to a whole array of questions, doesn't it? For instance, assuming Santino's behavior can, in fact, be replicated, repeated, and observed among other members of Pan troglodytes, does this mean this particular member of the Hominidae family has the ability to commit "sin"? Common ideas surrounding sin in various religions include, among other factors, the question of whether or not an act is intentional as a precursor to being considered sinful. Clearly, Santino's behavior and actions point to an act of intentional, and premeditated, assault upon zoo visitors.

Are we far from the day of chimpanzee confessionals, or Rites for Reconciliation?

Of course, Sally, in the previous post I jest.

Nevertheless, this latest finding does lend itself to questioning our self-proclaimed belief of our superiority and dominion over the other creatures of this small, fragile, planet.

Despite Santino's penchant for gathering stones, your closing points widen the moral and ethical questions of ethnocentric behavior to an even higher degree, wouldn't you say? Maybe a new term should be coined, "human-centric", to account for our tendency to look at the world primarily from the perspective of our own species. In my view, wide-scale consciousness-raising is our only hope for humankind's survival -- and that of every other living being that we share this world with.

I conclude with the following observation: "Chimps who cast stones shouldn't live in glass houses." How's that for originality? ;-)

I'm not sure I'd call Santino's behavior a sin, even though it is premeditated and intentional. He never throws stones at his own species, and he rarely hits the humans. When he does, it doesn't hurt them because chimps can't throw hard. It's more of a gesture really - a gesture that must mean "please go away and stop staring at us." I can't say I blame him!

I don't blame wildlife for trying to defend what little space we've left them on the planet. In the balance of power between animals and humans, animals definitely have the short end of the stick.

Although I realize this isn't really what you 're talking about, but it's what came to mind for me.

Thanks for commenting! That's what makes blogging fun.