Conflicting USDA advice : Yes or no to cheese? 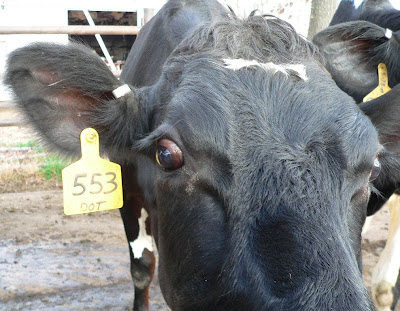 Dairy cow. Photo: Sally Kneidel
A couple of years ago, one of my co-workers brought a Pizza Hut pizza into our workplace for lunch. I remember it because I was surprised at how much cheese was on the pizza. Way too much! Biting it was like sinking my teeth into a greasy gob of congealed milk fat. I couldn't eat it.

I understand now why the pizza had so much cheese on it. The New York Times published an article on November 6 that explains it. 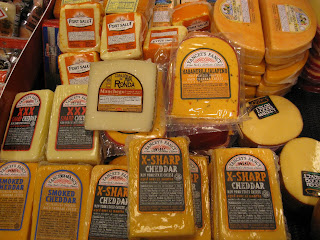 Photo: Sally Kneidel
I knew already that the Agriculture Department buys surplus foods, mostly animal products, that farmers can't sell for a profit; Sadie and I wrote about that in our 2005 book Veggie Revolution. Some of that food is donated to schools. In 1991, 90% of the food donated to schools by the USDA were butter, cheese, whole milk, beef, pork, and eggs. That's one reason school lunches have been and still are notoriously high in saturated fat.

What happens to the rest of the surplus? This is where the story gets confusing and just weird. The government is contradicting itself. Don't eat milk fat; do eat milk fat. 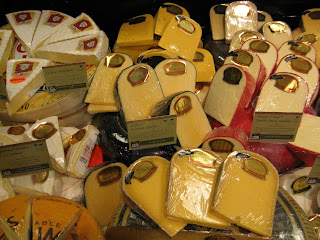 The USDA wants to pretend that health is a priority

Under pressure from medical and health organizations, the USDA in 2005 published a revised and more healthful "Food Pyramid" that recommends "low-fat or fat-free" dairy products. A USDA brochure called "Steps to a Healthier You!" advises us to "Ask for whole-wheat crust and half the cheese" on pizzas. These are part of the USDA's drive to reduce obesity and heart disease in the U.S. Through the federal government's efforts as well as medical warnings, Americans have been choosing more low-fat dairy products, leaving a bigger surplus of whole milk and milk fat products.


What to do with all that surplus milk fat?

The federal government could let the law of supply and demand take its course, and let some of our dairies go out of business. That would make sense, if we're eating too much cheese, and we are. According to the NY Times article, Americans now eat an average of 33 pounds of cheese a year, nearly triple the 1970 rate. Cheese has become the largest source of saturated fat for Americans; an ounce of many cheeses contains as much saturated fat as a glass of whole milk. 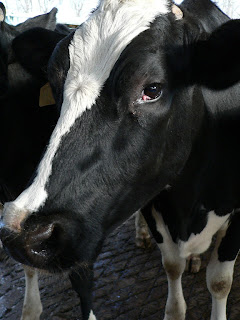 Photo: Sally Kneidel
But letting dairies go out of business is apparently not an option, I suppose because the federal government receives government-mandated fees from the dairy industry.

At any rate, the federal government has created a marketing organization called "Dairy Management" to promote the consumption of dairy products. Dairy Management's annual budget is $140 million.  The money comes from dairy fees and from the USDA, which oversees the ad campaigns and contracts of Dairy Management.

Domino's Pizza had slumping sales last year. Dairy Management to the rescue. The organization teamed up with Domino's to create a new line of pizzas with 40% more cheese. Who designed and paid for Domino's $12 million ad campaign to promote these new pizzas? Dairy Management - funded in part by our tax dollars (via the USDA). The ad campaign worked, and Domino's sales picked up. One of Domino's pizzas, called the "Wisconsin," has 6 cheeses on top and 2 more in the crust. One-quarter of a medium thin-crust Wisconsin has 12 grams of saturated fat, more than 3/4 of the recommended daily maximum.

Dairy Management has been helping retailers and manufacturers since at least the 1990s, maybe earlier. Dairy Management developed "The Summer of Cheese" promotion with Pizza Hut in 2002. That campaign generated the use of 102 million additional pounds of cheese, says the NY Times article. So I can thank Dairy Management for my co-worker's aforementioned fatty pizza. 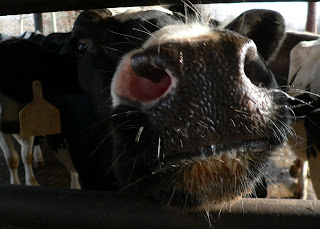 USDA: what is their real agenda?

It's disturbing to have a government organization promoting food that's known to be unhealthy, although that's been going on for decades. It's equally disturbing to know that we're now paying for two government campaigns within the same agency whose goals are completely contradictory.

Sadly, I really don't trust the government when it comes to wellness, diet, and medicine. It seems like there are so many in the food industry who are manipulating public health issues. What really frightens me is that so few Americans actually realize this.

An activist friend who's also an attorney emailed me this comment about this post:
"I bet congress's refusal to let dairies go bust has little to do with fees and much to do with lobbying and campaign contributions." She's probably right.