Is males' attraction to trucks and balls genetically based? 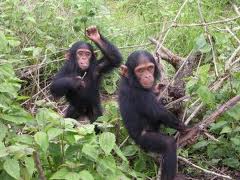 Young chimps. Photo: Delphine Bruyere
My husband and I raised one girl and one boy, close together in age. We tried hard to avoid gender-stereotyping our young kids in any way. They had the same toys, many of them gender neutral, for some time.

Our son clung to the baseball fence, drooling
As it happened, our yard backed up to a school athletic field. From late winter on, we daily heard the THWOCK of  bats hitting balls during baseball practice. Our son was barely able to walk when he began toddling out to the playing field alone, to watch the students play baseball.  He'd hang on the baseball fence with his tiny fingers for hours, mesmerized and drooling. Soon he was into trucks - at the age of 2, he memorized the name of 33 different kinds of trucks from the truck library books he clamored for.  Our daughter's interests were varied, but she showed no inkling of his fascination with balls and trucks. We couldn't understand it. He wasn't in preschool, and my husband and I cared nothing for vehicles of any kind (although Ken is a baseball fan).

We share 98% of our DNA with chimps
So last week I was intrigued to see a paper in the online journal Current Biology about gender-stereotyped roles in young chimps. Since chimps are our closest relatives, sharing 98% of our DNA, any observations about chimp behavior could have implications for the origins of our own behavior.


Young female chimps "play mothering" more than young males
Author Sonya Kahlenberg, a biological anthropologist at Bates College in Maine, observed chimps in Kibale National Park in Uganda over 14 years. She and co-author Richard Wrangham, a biological anthropologist at Harvard, noted that 67% of young females carried sticks while only 31% of young males did. Sticks are used sometimes as weapons or as tools, to probe holes for food or water. But the young chimps also cradled long thick sticks as if a stick were a baby, carrying it around for no particular reason. They sometimes carried the stick as long as 4 hours, and took it with them to their nests for sleep. The authors felt that the stick-carrying was "play-mothering." The males who did it stopped as they got older. The females stopped when they gave birth to real babies, whereas use of sticks for other purposes continued after motherhood.
In her recent article, Kahlenberg cited previous research in which captive young male monkeys preferred wheeled toys, while female monkeys, like human girls, showed greater variability in preferences. The male monkeys also showed more rough-and-tumble play than females. The authors of this study (published in PubMed) hypothesized that these differences are hormonally influenced.

Some have speculated that boys, including some male primates, prefer toys like balls and trucks because these toys are associated with more freedom of movement than, for example, playing with dolls.

Evolutionary advantage for human males to prefer movement?
Could it be true that very young male humans are drawn to balls and trucks because playing with them involves more movement?  It's not clear at all to me that male attraction to movement would be more advantageous evolutionarily than female attraction to movement. Even while carrying infants, our female prehistoric ancestors still were compelled to move around gathering plants for food, I would think. And keeping up with mobile children certainly involves movement. But if males were the defenders of early human tribes, and if they went on long hunts for food, then perhaps males could have evolved a hormone-based propensity to be more active.

I don't know, it's an interesting question. Culture has so much to do with it. A few decades ago, girls rarely if ever participated in team sports at school (at least in the U.S.). Today they do, when given the opportunity.

One more reason to protect wild apes
I'd love to see more field observations of gender-based behavioral differences in young primates. That's one more reason we need to protect chimpanzees and other primates from the illegal poaching that threatens all populations of wild apes.

Some of my previous posts about primates and primate conservation:
Hunting may threaten orangutans even more than habitat loss Dec 6, 2010