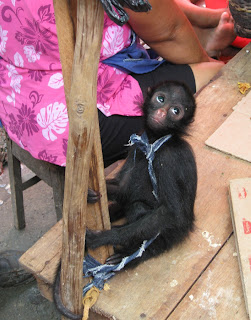 Tens, if not hundreds, of thousands of primates are traded every year, and the number's been growing linearly for 15 years When I read that news in a recent study by Vincent Nijman of Oxford Brookes University, I was not surprised. Having worked and traveled in Africa, the Amazon, and S.e. Asia, I've seen for myself that legal and illegal trade in primates is rampant. I've communicated with Nijman several times over primate issues; he seems to be one of the most knowledgeable academics alive on the subject of primate trade in S.e. Asia (and maybe elsewhere as well).
Nijman's article ("Primate conservation: measuring and mitigating trade in primates") is the overview article to a new issue of the open-access journal Endangered Species Research. This particular issue is the result of a recent conference and is devoted entirely to primate conservation. In Nijman's introduction, he and co-authors write that the international trade in primates -- for research, pets, meat, etc.-- is one of the biggest threats to primate conservation. Habitat loss and hunting are the main threats to primate survival in the wild, but trade is a leading threat for some species, such as the slow loris and Barbary macaque. 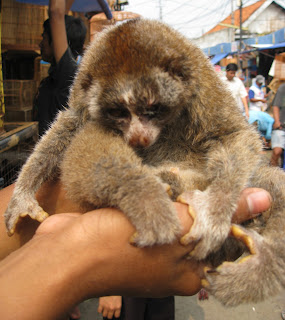 Slow loris for sale in Indonesia. Photo: Sally Kneidel
During the 1990s, numbers of wild-caught and captive-bred primates traded were roughly equal, but afterward captive breeding increased substantially.  By 2005, around 71,000 live primates were traded internationally, 53,000 of them reported as captive-bred. However, some of the captive-breds may have been laundered wild-caught specimens.

Since 1995, China and Mauritius have supplied more than half of all primates traded internationally (31% and 18% respectively).  And guess who is the largest importer of live primates? I'll give you a hint - a country with thriving medical research and a poorly regulated pet trade.  Yep, the US imports the most live primates (26%), with Japan (14%) and China (13%) close behind. 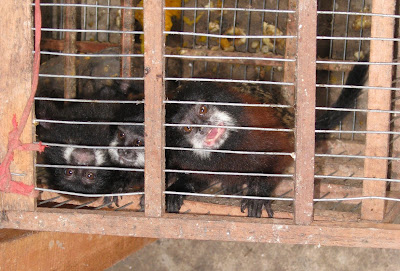 Saddlebacked tamarins for sale in Peru (I'm looking down on the cage).  Photo: Sally Kneidel, PhD
Although I knew about the trade in live primates, I was shocked to read in Nijman's paper that more than a million dead primates are traded every year. The trade in dead primates and primate parts includes almost 20,000 exported as hunting trophies over the past 30 years.

The dead also include more than 100 primate species used in traditional medicines (based on cultural superstitions).The journal mentioned above contains a paper by Starr et al. documenting the threat posed to two slow loris species in Cambodia from such trade. 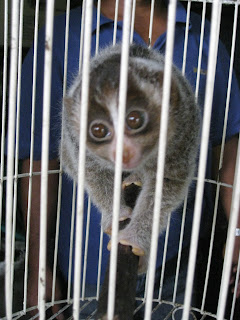 Slow loris for sale in Java. Photo: Sally Kneidel
However, the major trade in primates is in those traded domestically for food. A paper by Wright and Priston in this same special issue examines what drives such trade in southwestern Cameroon and concludes that many more primates are sold there for wild meat than are captured for local consumption. 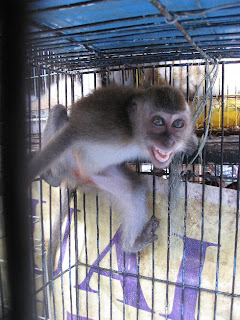 Long-tailed macaque for sale in Indonesia. Photo: Sally Kneidel
Examples of illegally traded primates include long-tailed macaques from mainland S.e. Asia (Cambodia, Laos, Viet Nam) into China, to supply the booming biomedical trade. A paper in this special issue by Maldonado and co-workers documents the illicit trade of over 4,000 night monkeys (Aotus spp.) each year from Peru and Brazil into Colombia to supply a biomedical research facility. 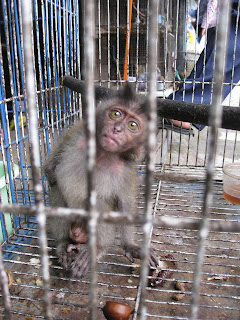 
“The above figures are from an analysis of legal trade reported to CITES [the Convention on International Trade in Endangered Species of Wild Fauna and Flora], but the true figures are likely to be higher, because of under-reporting and illegal trade,” says Nijman.

As Nijman et al. note, in 2006, trade was listed as a threat to only one of the world’s most threatened primates species, but four years later, trade for meat, medicines and pets is implicated in the decline of nine of these species. 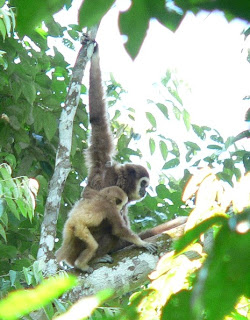 Other papers in the special issue include one by Chris Shepherd of TRAFFIC Southeast Asia on the illegal primate trade in Indonesia.  He also contributed as a co-author to an article on gibbons in zoos and rescue centers in Indonesia. Chris is an impressively diligent and persistent wildlife-trade researcher and writer for TRAFFIC in S.e. Asia.  He was a big help to me in preparing for my own travels there.
“The illegal primate trade in Asia is decimating populations of some of the region’s most charismatic species: tackling such trade should be regarded as an urgent priority for wildlife enforcement agencies in the region,” said Shepherd.

Other topics covered include effective implementation of CITES; the use of forensics in trade; problems, pitfalls, and successes of rehabilitating and reintroducing confiscated primates; and educational and livelihood strategies to mitigate trade.

Sources:
"Trade threat to primates" on the website of "TRAFFIC: The wildlife trade monitoring network." The article "Trade threat to primates" was written I believe by Richard Thomas of TRAFFIC. Many of the comments from my blog post above were direct quotes from Thomas's summary. (Thank you Richard! And thanks for using the spider-monkey picture I donated to TRAFFIC for your summary!)

Some of my previous posts about primates, primate trade, and primate conservation:
We are family: new evidence of our close link to chimps Feb 16, 2011
Is males' attraction to trucks and balls genetically based? Jan 14, 2011
Hunting may threaten orangutans even more than habitat loss Dec 6, 2010

I found this post really interesting. One of my biggest concerns and passions is the wellbeing of all animal species. This was a very eyeopening article, because, although I have heard of animal trading, I did not yet know the extent of it in this particular region.

Thanks for the information, and keep up the great blog!