Lawns Are 5th Largest "Crop" in Terms of Land Use 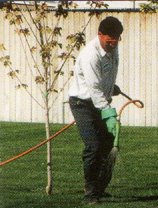 photo courtesy of www.summerwindlawn.com
The Southeast is already baking in the summer heat. The grass in our yard is crispy from the heat and lack of rain. Not that I care about our "grass." It's not grass anyway, it's mostly other plants - plantain, wild violets, oxalis, clover, chickweed - mowed to simulate grass. Upon close inspection, the yard also turns out to be a minefield of chipmunk holes. One area has so many holes that the ground is actually starting to sink, which is fine with me. Maybe if we're lucky, some big and interesting wildlife will move into the hole. But not likely, since I saw Animal Control trolling the neighborhood last week for raccoons and possums to tote away.

I would like to get rid of the grass altogether. I learned just last week that grass is the 5th largest "crop" in the United States, after corn, wheat, soybeans, and hay - in terms of land use. I was surprised to learn that the use of pesticides is 20 times greater per acre in residential yards than on farms!! For what purpose? Most yards don't grow a single thing we use for food or clothing or fiber - they're purely ornamental. The practice of covering our yards with a monoculture of grass and manicured non-native shrubs and flowers is chemical-intensive and energy-intensive and high-maintenance. All the trimmings and clippings and mowings required to keep these non-native plants looking tidy generates 20% of our landfill waste, in spite of recent effort to mulch and recycle yard waste. I was surprised at that. So much yet to learn...

I called Scott's lawn service a couple of weeks ago to find out what they would recommend for our yard - just out of curiousity. The lad who came out was quite nice. Said the standard prescription is herbicides to kill all the non-grass plants, such as those named above, the application of 4 lbs of chemical fertilizer per 1000 sq ft of lawn, insecticides to kill "turf-damaging insects," and GrubEx as needed to kill grubs, which are food for moles. This is per visit. The contract includes 5 or 7 visits per year, depending on whether you get the regular or deluxe version. The latter also includes aeration and seeding.

I thanked him for his visit but declined the services.

I would like to just let our yard go to succession - let it just grow untended for a few years and see what happens. One of my neighbors did that. His lawn is about 6 feet tall now, looks heterogeneous and interesting. But....I realize now that that's not necessarily a good idea, because a lot of the plants that colonize our lawns on their own are not native species. When people plant ornamentals, some of them spread aggressively, and wind up in my yard too. Non-native plants that spread aggressively, whether by seed dispersal or vegetatively, are called "invasive species." The county conservation office told me last week that the plant life in one of our urban nature preserves in Charlotte is 30% introduced or non-native species. None of which were planted there intentionally. Some were dumped there as trash before the area became a nature preserve. But a lot of them were started by seeds dispersed by way of wind or animal droppings.

To landscape a yard in a way that's really eco-friendly, I need to choose native plants, and ideally plants that will also feed local wildlife. Wildlife are adapted to survive on the food and shelter provided by the plants they evolved with. These plants could include native holly, mulberry, persimmon, sunflower, dogwood....

Sara Kate learned in a edible plants workshop she attended that the pre-Columbus indigenous people of this area subsisted mainly on mulberry, persimmon, chestnuts, and walnuts, with lesser amounts of wild greens. Supplemented with some meat on occasion, I suppose. Or not. I don't really know about that.

I'm thinking about planting some native wildflowers. But where can I get native wildflowers without digging them up and removing them from their native habitat? Don't want to do that. Maybe I could collect a few seeds from native flowers, after the flowers have gone to seed. That wouldn't hurt the plants. I could leave some seeds behind. Gonna look into that.... 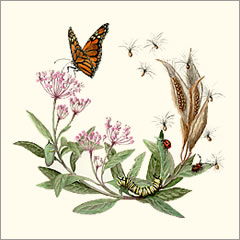 drawing courtesy of NC Botanical Garden at UNC Chapel Hill
Actually just found a good web site about "Landscaping with Native Plants" by googling native plants North Carolina. It lists some nurseries that sell seeds for native plants. I wonder where the seeds come from. I hope they're from propagated plants, so that wild stock are not being depleted of their seeds. One of the nurseries listed is nearby, so I'm gonna check it out....
Posted by Sally Kneidel, PhD at 10:49 AM

Do you have a local seed bank in Charlotte? I'm in Hastings UK, and one of the things we do round here is seed swaps, especially on endangered veggie crops. If there isn't one in your area, maybe you'd consider starting one?