Review of the Documentary "Kilowatt Ours" by Jeff Barrie 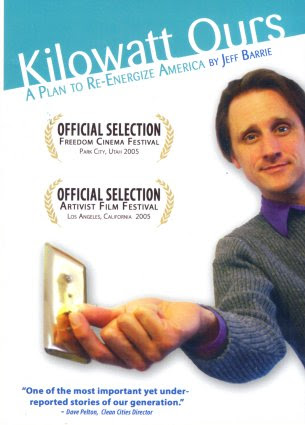 "Kilowatt Ours" knocked my socks off. It's a testament to the power of documentaries to get our attention fast. In this simple but extremely effective film, Jeff Barrie documents how coal-mining power companies are exploiting the Southeast, with dangerous health and environmental consequences. And more appalling, he shows how we consumers are blithely supporting the power companies' clandestine activities with our gluttonous, if ignorant, energy consumption.

Jeff Barrie was smart, he started with the most violent scenes - mountaintops exploding into the air, reduced to river-clogging rubble. For every ton of coal removed from the mountains of West Virginia, the 6 million tons of earth and forest above the coal must first be pulverized and dumped into the valleys below. Barrie uses poignant interviews with locals impacted by the disappearing mountains and ravaged landscapes to document the damage.

Coal-fired power plants are bad news all the way around. The Southeast uses more power than any other part of the country. The average Southeast home uses 1100 kilowatt-hours per month; the national average is 850. In the Southeast, 61% of our power is from coal! According to the Department of Energy , the combustion of 1 ton of coal releases more than 5,000 pounds of planet-warming carbon dioxide into the atmosphere.

And in the Southeast, powering one average household requires a ton of coal every 8 weeks!! Seems unreal. But it is real.

Burning coal also releases sulphate particulates into the air, a major air pollutant. As a result, asthma is now the most prevalent chronic illness in children, the #1 cause of school absences. Barrie has several sad and tender scenes of children displaying the arsenal of drugs and inhalers they need to aid their breathing.

"These are some of the drugs I need to help me," says one somber little boy, gesturing to a counter-top covered with medicine bottles.

Another interesting scene in the movie shows Dick Cheney saying that our energy use in the U.S. is so high (and our population is growing so fast) that we will need one new power plant every week for the next 20 years to keep up.

That is a sobering thought.

Then Barrie gets to the solutions. I love this part. He profiles schools, homes, businesses that are cutting back on their energy use with simple measures. Jeff and his wife Heather live in a basement apartment in Nashville. Simply by replacing all their incandescent bulbs with compact fluorescent bulbs, and buying a used energy-efficient frig for $200, they cut their power usage in half. Then he explains how most or many power companies offer a green-power option. By checking a box on your power bill and paying a small extra amount, you can specify that you want all your power to be drawn from green sources, such as wind and solar. This gives the power company incentive to develop more green sources. I know we have that option in North Carolina. You can learn more about it at NC Green Power. Barrie demonstrates that if we all adopted simple energy saving measures to make our homes more energy efficient, and opted for green power on our power bills, we could get rid of coal-fired power plants altogether. He's pretty convincing. After watching it, we replaced the last of our incandescent bulbs with compact fluorescent from Home Depot. They cost more, but they're supposed to last 6 or 7 years. And use only 10% of the energy of incandescent. The light is the same warm glow as incandescent.

Barrie did a great job. His film makes me want to study how he pulled it off - so simple and powerful a statement of problem and easy solution. It's personal, it's factual, and it's absolutely convincing.

This film is a must-see for everyone! Citizens of this country need to become aware of where our power comes from and the effects of our wasteful use of power; this film should start people thinking and finding out the truth. Mr. Barrie's approach leaves you feeling hopeful and empowered. In my community in Montana, we are fighting the building of a coal-fired power plant. So many people do not like it but they believe there is nothing they can do. Many others feel we need the power plant to supply our energy needs. They feel it may be bad, but we have no options. This film demonstrates there are many options! I highly recommend this film and urge that it be shown at schools and in house screenings and public screenings all over the country.

I replaced most of the light bulbs in my home with the energy efficient style light bulbs which I purchased at Home Depot. The only light bulbs I did not replace were the ones operating on a dimmer switch. Does turning the dimmer switch down translate into an energy savings? The energy efficient light bulbs have a life expectancy of about 7-9 years. I believe they also contain mercury. Is there going to be a problem of mercury contamination caused by people not properly disposing of these light bulbs? I know of people who are shying away from them for this reason. In order to encourage proper disposal perhaps when they are purchased there should be a deposit on them of say $1 so that when they are taken to recycling you get your deposit back. Also, what ever happened to Nuclear Fusion?