Earlier this month the cofferdams designed to temporarily hold back the rising waters of the Yangtse River were removed and China's greatest engineering feat, Three Gorges Dam, cut the heart of the dragon. When completely filled in 2008, the reservoir formed by Three Gorges will stretch 412 miles to Chongqing, creating a long, deep, wide and slow moving river that will enable safe, reliable navigation along China's most important waterway, as well as an important hydroelectric resource for the Chinese economy.

Three Gorges Dam, became a reality after nearly 100 years of planning. In 1919 Chinese Premier Sun Yat-sen speculated about the benefits of constructing a modern hydroelectric project on the Yangtze River. By the end of WW II, the first director of the TVA (Tennessee Vally Authority,) David Lilienthal wrote a book, TVA: Democracy on the March later published in China, which is widely considered to be the inspiration for the Yangtse project. 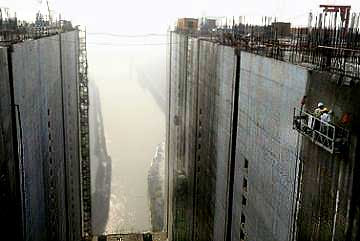 Three Gorges Dam was envisioned to harness the great river or long river, as the Chinese call it, which winds its way 3,900 miles to the East China Sea. The river coils like a mythical dragon through an area that is home to nearly 400 million people. Three Gorges Dam spans the point where the last of three narrows called gorges funnel the annual runoff from the 20,000-foot high Tibetan plateau. Annual floods have, over the last century, caused billions in damage and the loss of hundreds of thousands of lives. Flooding in 1911 killed unknown thousands and again in 1931, took the lives of another 145,000 people, inundating an area the size of New York State, and submerged more than 3 million hectares of farmland, destroying 108 million houses. In the flood of 1935, 142,000 people were killed. As recently as 1998, flooding along the gorges led to 3,656 fatalities, and affected the lives of 290 million people. In that flood, there were more than 5 million houses destroyed and 21.8 million hectares of farmland submerged. The total economic cost of the flood that year was for $30 billion.

When first proposed, the construction was touted by government officials as reminiscent of last century's development of the Tennessee Valley Authority to control flooding in the United States. Three Gorges Dam, which has 26 generators, will produce 85 billion kilowatts of electricity per year, nearly one-ninth of China's present power needs. The control storage of the Three Gorges Dam reservoir is 22.15 billion cubic meters; the flood causeway is 483 meters, with the maximum discharging capacity at 102,500 meters per second, also a record. The two-way, five-step lock is also the most advanced in the world.

When Chinese authorities announced in 1992 that China would begin construction, at last, of Three Gorges Dam they faced considerable resistance from environmental and humanitarian interests around the world. Entire towns were to be displaced by the rising water, thousands of lives uprooted and moved, ancestral ground submerged forever. As recently as the last Presidential elections in the United States, environmentalists voiced caution that the project would result in increased industrialization along the banks of the Yantgse resulting in elevated levels of pollution across one of the world’s most densely populated regions. Recent spectrographic analysis provided by Envisat orbited by the European Space Agency reveal a trend toward increasing levels of nitrogen dioxide, a compound suspected of being a major contributor to global warming. The potential for accelerated NO2 increases is not without concern for environmentalists.

While it would seem that flood mitigation, with its consequent reduction in the loss of life and property, would be a worthwhile commitment, environmentalists point out that such control projects are unlikely to overcome a 100-year event. During the intervening control cycle, populations increase and the memory of past events fades to the point of dangerous disregard and that in such an event more lives could be lost than in all previous floods combined.

Silt accumulation is another disadvantage of large damming construction, the slowing of the river allows greater amounts of silt to settle out of the stream. The Yangtse is one of the world’s most turbulent rivers pouring 960 billion cubic meters of water into the East China Sea annually. The subsequent silt bloom is visible from space and scientists are uncertain what effect the discontinuance of this sedimentary deposit into the East China Sea will have in the long term.

The Three Gorges Dam, while providing great economic and cultural benefit to a growing Chinese economy, at the same time seems to reprise the doubtful contribution of similar undertakings over the last half century of dam building in the United States. Damming projects here have largely failed to provide long-term solutions to soil erosion, flood control or power supply even while they promoted industrial growth and economic gain. Perhaps, in the end, manipulating nature for short-term advantage may prove to be a double-edged sword afterall and not a true dragon slayer.

by Harlan Weikle
Greener Magazine
Posted by For Paws Hospice at 12:00 PM