Foie Gras from Force-fed Geese is Banned in Chicago

On Tuesday, Chicago became the first city in the nation to outlaw foie gras - the fattened livers of geese and ducks. The city council banned the stuff from restaurants because they consider the method of producing it to be animal cruelty. Foie gras is made by force-feeding geese and ducks through a pipe stuck down their throats.

To make foie gras, the birds - usually geese - are force fed much more than they would normally eat. The feed is usually corn saturated with fat. The extra food and the fat cause their livers to swell to multiples of their normal size, so big that the geese have trouble walking. The liver becomes laced with fat, giving the liver a smooth buttery taste. So they say. 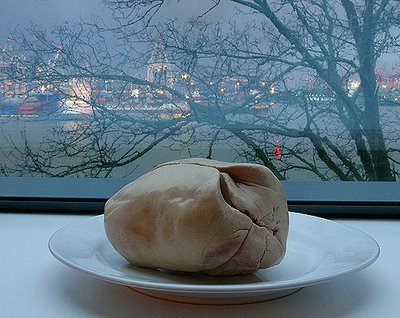 fattened liver of a force-fed goose
The Chicago Department of Public Health will be in charge of enforcing the ban on foie gras. Restaurants violating it will first be given a warning, then fined $250 to $500 for a second offense.

It'll be interesting to see how well the ban is enforced. But regardless, it sets an important precedent. I don't know of any other examples of a meat product being banned due to animal cruelty. California has a foie gras ban planned that will begin in 2012, and New York is working on a similar law. A bunch of European countries, plus Israel and Argentina, have already banned it. Is it possible other kinds of meat could follow? Veal would be a good candidate. From what I read about foie gras on Wikipedia, I think the production of veal is at least as cruel, if not more so. I mean, once you start down that road, where do you stop? As we discovered while visiting the factory farms we wrote about in Veggie Revolution, all meat from animals raised in confinement on factory farms is the result of suffering and cruelty.

This ban on foie gras could actually be a huge watershed event for farmed animals of the future, and their advocates. Let's hope so.

For more about foie gras, see our August 26 post, Just What Is Foie Gras??