My Pic of Mountain Goats Looks Like Fleas on a Mountainside

We really wanted to see mountain goats at Mt. Baker in Washington - beautiful shaggy white animals, leaping on impossibly steep and narrow rocky crags, where you're sure they'll fall. You've probably seen them on nature shows, or on posters with dumb captions about hanging on. Somehow they cling to the rocks and vertical surfaces like they had suction cups. 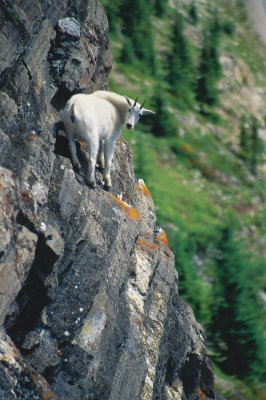 Mountain goat in Banff, courtesy of www.stgeorgesinthepines.org/wildernessspirit.htm
But how do you find a mountain goat? They live only near the timberline in remote mountains. "May be seen at a distance by the adventurer" says our mammal fieldguide. An unlikely find during a 12 day camping trip.

I've learned over the years that the best way to spot wildlife in a new place is to ask other people. I have no pride. If I'm in a national park or a state park, I ask every ranger I see. I ask the people behind the desk at the visitor center, too, if there've been any interesting wildlife sightings in the last couple of days, and where. I ask them every day I'm there. They almost always have an answer. Sometimes they act irritated, but I don't care. Some parks keep a log book of sightings. And if I see a hiker with binoculars or a spotting scope or a handheld radio, I ask them what they've seen and where too.

When we were at Mount Baker in the North Cascade range in Washington state a couple of weeks ago, we ran into a hiker with expensive looking binoculars on the Ptarmigan Ridge trail. We stopped to talk to him. Ken and Alan (husband, son) wanted to ask him about rosy finches and ptarmigans, birds that are common to snowfields and glacier areas around there - birds that we hadn't seen yet. The guy was helpful. Told us where he'd last seen ptarmigans, and said the rosy finches are along the edge of the snow. Yeah, there was still snow there in August.

We never did see the finches or ptarmigans, but we ran into the same guy on a different trail later, and he told us exactly where he'd just seen some mountain goats. So we ran back to the spot. Sure enough, there was a herd of about 20 - mostly mothers and kids. They were on the other side of the valley, not a close-up view by any means, but still good enough to mark down in the field guide as a definitely spotting. 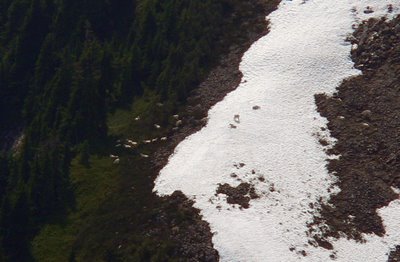 Here's a better picture of a mother mountain goat and her young, taken on Snagtooth Mt in Washington by Alan Bauer: 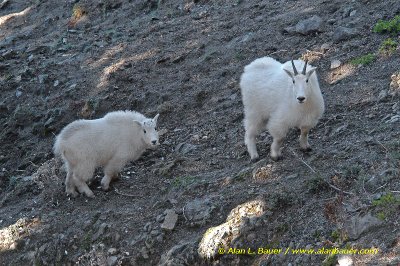 Here (below) is a mature male mountain goat taken by Ron Niebrugge at Glacier National Park in Montana. Aren't they beautiful? 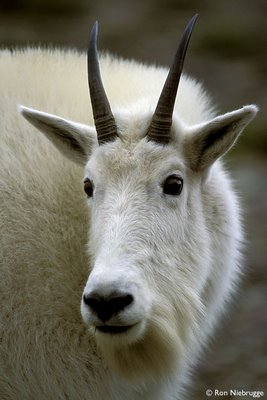 Mountain goats are always white, have a definite "beard," and have black hooves and short smooth dark horns that curve backward. Their habitat is steep slopes and rocky crags near the snowline, often above the timberline in summer. They feed on high mountain vegetation, grow up to 300 lbs says our field guide to the mammals by Wm Burt. Found in national parks of the NW - Mt. Ranier National Park in Washington and Glacier NP in Montana, Banff and Jasper in Canada. Also Black Hills of S. Dakota. They have been introduced into Olympic National Park and North Cascades NP in Washington. 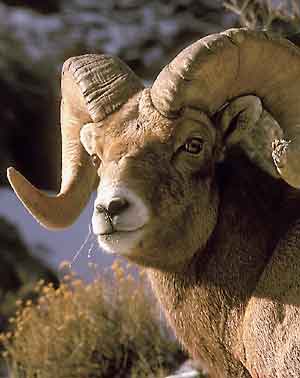 Bighorn sheep can be gray, black, brown or white. Like mt goats, they're found on mt slopes, but their range extends all the way from the NW down into northern Mexico. They don't require cold climates. And they're not as elusive as mountain goats.

You might see pronghorn antelope and deer in national parks, but not at the same elevations as mountain goats. The antlers of a pronghorn project forward; deer antlers are branched - different from mt goats. Here's a pronghorn, easy to spot if you happen to go to Yellowstone. 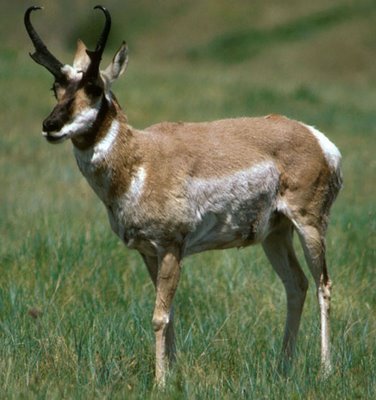 a pronghorn antelope, common in Yellowstone, antlers project forward
Mountain goat populations aren't endangered but are declining. In nature, they're killed by malnutrition, avalanches, rockslides...and falls. They do fall from time to time. Eagles and cougars eat the young.

But their main threat is humans of course. Habitat loss is the biggest factor, due to new roads for mining and logging. And oil drilling. Trophy hunting also takes a big claim on them. Google Images for "mountain goat" and you'll find plenty of photos of hunters grinning over their dead mountain goat. These goats reproduce more slowly than most hooved animals, which makes them less resilient to threats. Estimates of their current population in North America are 40,000 to 100,000. Not too bad but, like I said, declining. What can you do? Let your local legislators know that you care about wildlife. Write them letters and ask them to make habitat conservation a top priority.