In Search of Northwest Birds

In August I posted some info about the wildlife of the Pacific Northwest that we spotted on a recent trip to Washington state and Vancouver Island, B.C. I wrote about humpback whales, mountain goats, harbor seals, and the best place to spot Orcas. We saw a lot of birds too - oceanic and shore birds and mountain birds. I'm not a real bird expert though. So I asked my son Alan, who's 20 and has been an avid birder for some time, to write something about the birds we saw. Well, birds he saw. He was much more determined than I was in tracking down birds he wanted to see, venturing far out onto rocky coastlines, walking long distances, etc. Anyway, for you bird fans, here is Alan's account of the birds on the trip. 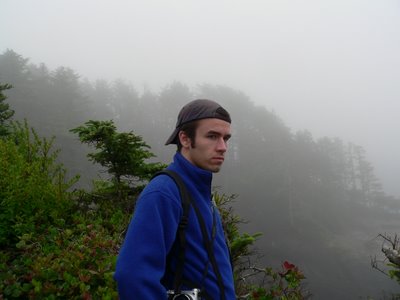 "From July 25th to August 5th, 2006, we spent time in state and , . In this land of diverse habitats, I spent most of the time birding. We traveled briefly to the Olympic Peninsula, jutting into the gray and crashing Pacific. We went to Cape Flattery, the most western point in Washington, where the moist forests contained flocks of Golden-crowned Kinglets and Chestnut-backed Chickadees, Hermit Thrushes, and the cryptic Pacific-Slope Flycatcher. Emerging onto the Capethe trail halted at a stunning overlook of vertical cliffs, sea caves, and foggy waters. Peregrine Falcons perched on stunted spruce, while Tufted Puffins, Rhinoceros Auklets, Pigeon Guillemots, Common Murres and Glaucous-winged Gulls traversed the narrows. Bald Eagles let out their raucous calls, as they soared above us, unseen through the fog. Staying in the town of Sekiu, we woke to scattered Marbled Murrelets in the bay, a threatened species of seabird.

"The next days, traveling into , we headed to on . I was in search of the famous 'rockpipers' of the Pacific coast. These are a group of four shorebirds that are only found on remote rocky outcroppings revealed during low tide. Black Oystercatchers ruled the rocks, while slender Wandering Tattlers bobbed at the water’s surface. Black Turnstones sat invisibly against the rocks, until they burst into flight, showing their stunning pied wing pattern. We couldn’t find the Surfbird, despite extensive searching. Perhaps it was a bit too early in the migration season for them. In the rainforest that grows right up to the beach, flocks of Wilson’s, Townsend’s, and Orange-crowned Warblers were abundant. Inquisitive Stellar’s Jays investigated, while Red-breasted Nuthatches and Brown Creepers stayed hidden in the canopy.

"Our third stop was on the . Here, against the backdrop of Killer Whales and stunning scenery, Harlequin Ducks swam through the kelp beds. Flocks of Surf Scoters passed by. A sign of the increasing fall shorebird migration, Greater Yellowlegs, Least Sandpipers, and Spotted Sandpipers showed up.

"Our final stop was to Mount Baker, back in . Here, we were immersed in the Cascades, where towering evergreen forests give way to the alpine tundra. Vidler’s Alpine and Mormon Fritillary butterflies poured over the stunning array of alpine wildflowers. American Pipits perched on skree slopes, holding guard over their territories. Common Ravens announced their presence overhead, as Gray Jays posed within a couple of feet. After traveling in the tundra, we walked back down through the forests. Here, the secretive Red-breasted Sapsucker was found, along with the shadowy Varied Thrush. Spruce Grouse walked boldly along the roadsides, as American Dippers fed through the torrents of the ."

Alan mentioned that we were on the lookout for several days for Surfbirds, one of the group of birds known as rockpipers that he mentioned above - birds of rocky coastlines. We never did see the Surfbirds, although Alan and his dad sure gave it a go. We were also on the lookout for Varied Thrushes, which are supposedly quite common in Washington. Every park ranger or birder we asked said oh sure, you'll see them. So we kept looking. Finally, on our last day, the day we left the state, we were driving down a 12 mile gravel road, down from the trailhead of the Skyline Divide Trail at Mount Baker, looking at robin after robin who kept flying up from the road (robins look a lot like Varied Thrushes) when finally, finally, a Varied Thrush showed itself in the middle of the gravel road. At first we thought - another robin. But it started its odd bobbing, with its tail up in the air like a wren, and then we saw the band across the chest. A Varied Thrush! Thank you little bird. A nice goodbye to our trip. 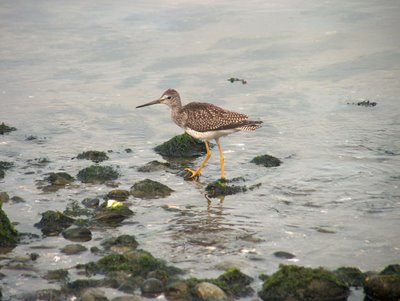 See our post of September 4 for information and links about seabirds threatened with extinction by the fishing industry's gill nets and longlines. That post also includes links to online guides to help you choose fish for your dinner table in a way that minimizes your health risk and protects the most threatened fish species.