Did you read "The Rime of the Ancient Mariner" in high school? The albatross in the poem is an omen of bad luck for the writer and his ship, but in reality the albatross is the butt-end of some god-awful bad luck dished out by the fishing industry. The albatross, a magnificent bird with a wingspan of up to 7 feet, is one of many oceanic birds in serious trouble from the massive-haul fishing techniques of today. Among other seabirds whose luck is running out are the colorful and beloved puffins.

We were lucky to spot a couple of Tufted Puffins and many other seabirds on a recent trip to Washington state and Vancouver Island, B.C. I posted an account of the birds and their habitats, written by Alan Kneidel, on September 1.

Many of the seabirds we saw were in the family Alcidae. Alcids spend their lives floating on the ocean and swimming underwater for fish - birds such Tufted Puffins, Pigeon Guillemots, Rhinoceros Auklets, Common Murres, and Marbled Murrelets. These birds can and do fly, but most of them come ashore only to breed. You can see these seabirds from the ferries of Washington and the B.C. coast, or from coastal cliffs. They look a bit like black and white ducks floating on the water, except that most have narrow pointed bills rather than duck bills. That is, except for the puffins. Puffins have huge, showy, red and gold bills that make them popular subjects for photos. A puffin can catch a dozen or more little fish at once in its bill. The Tufted Puffins are a rare sight, though. We were very fortunate to spot the two that we did from remote Cape Flattery - a naturalist we talked to on a ferry said that he had seen only one Tufted Puffin in the last 12 years! They are listed by Washington state as a "species of concern." A government website says "more data" is needed on the status of Tufted Puffins before adding them to the list of endangered species. 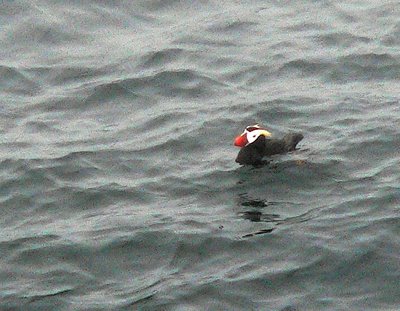 Tufted Puffin from cliffs of Cape Flattery, Washington, Sally Kneidel
So the alcids - the puffins, murrelets, etc. - are seabirds that you can sometimes see from shore and from ferries.

But other seabirds, called "pelagic" species, seldom come close enough to shore to see them from a ferry or a cliff. These include birds like albatrosses, shearwaters, and petrels - and some of the alcids as well. To spot these birds of the open ocean, you have to hire a boat to take you on a "pelagic" birding trip far offshore. Ken and Alan (husband and son) have been on a few pelagic trips.

All seabirds of the Pacific Northwest, both coastal and pelagic species, are feeling the impact of the fishing industry. But some more than others. As we learned while visiting the salmon-fishing village of Sequi, on the northwest corner of Washington's Olympic Peninsula, the Marbled Murrelet is endangered because of "gill nets." Gill nets are intended to snag fish by the gill covers when they swim into the net and try to back out. Groups of nets can be tied together to stretch for 3000 meters! In the coastal straits off the n.w. Olympic Peninsula near Sequi and Neah Bay, gill nets are submerged to catch salmon, as the fish head for one of the 20+ rivers in the area where they spawn. One Sequi fisherman told me that gill nets trap much more than the local target species, salmon. The "bycatch" or unusable catch includes other fish species, seals, sea otters, and diving seabirds such as the Marbled Murrelet. All of the air-breathing species are killed by drowning; many of the fish bycatch are killed too by the hauling-in process, and are thrown back, dead. Gill nets are also commonly set in open waters, where they catch and drown porpoises and whales. For more about gill nets, see the Cetacean Bycatch Resource Center 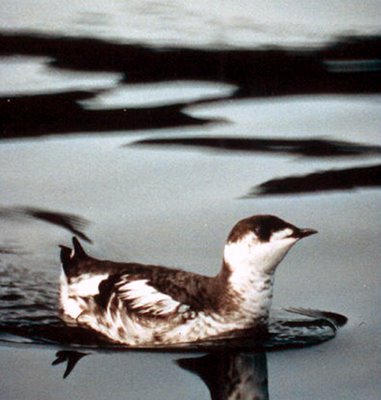 Marbled Murrelet, endangered by gill nets
"Longlines" are another fishing technique that is endangering offshore pelagic seabirds such as albatrosses, shearwaters, and petrels, as well as whales, dolphins and porpoises. A longline is a fishing line up to 60 miles long, with up to 30,000 shorter lines with baited hooks trailing from it. Seabirds often take the bait, and are then dragged underwater and drowned. For more about the dangers of longline fishing and what you can do, see the Cetacean Bycatch Resource Center and the American Bird Conservancy. The ABC has published an online document about the impact of longline fishing on seabirds. The document, entitled "Sudden Death, Longline Fishing: A Global Catastrophe for Seabirds," reports that 64 species of seabirds have been killed in longlines worldwide, and that 23 of these species are in danger of extinction from mortality due to longline fishing. This report concludes, on page 13, with a list of measures you can take, as a citizen, to protect wildlife from longline fishing. 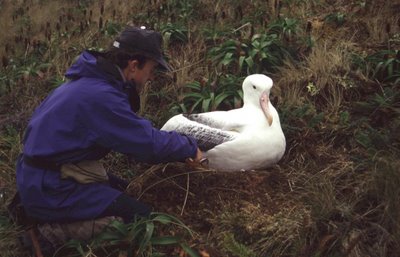 One thing we can all do, which I don't think the document mentions, is to eat less fish. After what we've learned about global overfishing while researching our new book (from Fulcrum in 2007), I don't eat fish anymore, period. If you must eat fish, check out one of the frequently updated online guides to environmentally-friendly fish selection, and fish that have lower levels of mercury and other heavy metals in their flesh. You can find these guides at Oceans Alive, Audubon's Living Ocean, and Environmental Defense.
Posted by Sally Kneidel, PhD at 9:26 AM

Anonymous said...
This comment has been removed by a blog administrator.
7:30 PM