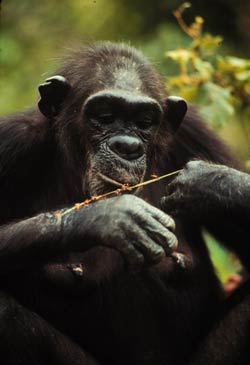 photo of Flo the chimp courtesy of www.janegoodall.org

That is, if the guys and the gals are chimpanzees.

Anthropologist Martin Muller of Boston University and his team of researchers in Uganda's Kibale National Park have found that male chimpanzees prefer female chimps over the age of 30, perhaps because of their demonstrated success at surviving and at raising offspring.

Chimps are promiscuous - both sexes mate with many partners. The scientists measured male interest in females of different ages by tracking the chimps' copulation and other sexual behavior. Male chimps mated significantly more often with females age 30 or older than with younger females. Even the oldest female, at 55, attracted much more interest than did young females of 15 to 20 years of age.

In addition, females over 30 attracted more attention from groups of males during their fertile periods and were more often the objects of fights between males than were younger females.

Why? The mating game has evolved differently in humans and chimps, says Dr. Muller. Because humans form long-term sexual relationships, "men tend to look for women's physical signs of youth, which signal childbearing potential for years to come."

Although humans may not be conscious of these underlying motivations when choosing a mate, the preferences have become imbedded in our culture, and may be innate to some degree, some anthropologists speculate.

Interesting to think that the human obsession with young females and youthful sex characteristics has its evolutionary basis in our long-term relationships. What if our mating patterns were more similar to those of chimps?

Perhaps our fixation on smooth taut skin is much more artibrary than it seems.