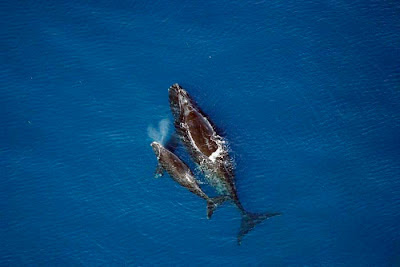 For 70 years, laws have protected the North Atlantic right whale from whaling ships, but the population is not increasing. Their numbers are so low that just a few deaths of mature females could trigger the collapse of the entire group. The species is the most critically endangered in the Atlantic with only about 300 in existence.

U.S. lobster and fisheries fleets are currently a major threat to the right whales' survival.

North Atlantic right whales are coastal animals that tend to hang out in waters with coastal fisheries, heavy ship traffic, and pollution. Deaths today are caused largely by fishery rigging and lobstering gear that entangles them, and by ships that run into the whales.

But scientists say that a few simple changes by the lobster industry could greatly increase the North Atlantic right whales' chances of survival and recovery. The recommended changes are fewer lobster traps and a shortened lobstering season. In the January 9 issue of Current Biology, biologists recommend a 6-month lobster season and a 90 percent reduction in the millions of traps that are currently allowed. Especially reducing the number of traps in the Gulf of Maine in fall and spring, when the whales migrate through the Gulf, would improve the whales' chances of survival.

The thriving Canadian lobster fishery already limits its lobster season, while U.S. regulations permit lobstering year round. The U.S. lobster fleet also uses a lot more traps than they need to - 13 times more traps than Canadian fleets for an equivalent number of lobsters!

With more efficient methods, U.S. workers could harvest the same number of lobsters with less danger to the whales, say the biologists, Drs. Ransom Myers and Boris Worm of Nova Scotia's Dalhousie University.

The Maine Lobstermen's Association objects to these recommendations. They deny that changing the industry's methods could have any benefit to the whales.

Not surprising - professional organizations seldom voluntarily impose limits on their own production or harvesting methods. So it will likely be up to the U.S. government to impose limitations on American lobster fisheries.

If you would like to encourage federal limitations on the lobster season and number of traps, write to your representatives in Congress. And remember that your food selection is a powerful form of activism. When you choose fish and lobster, you're supporting the fleets that harvest these animals, with all of the unintended bycatch of other marine animals. Consider eating for environmental change. Consider choosing plant foods, or if you must eat animal products, choose products from pastured animals. If you must eat seafood, consult Oceans Alive's "Best Seafood Choices."

For more reading about the natural history and conservation of right whales, see the NOAA's right whale web page. 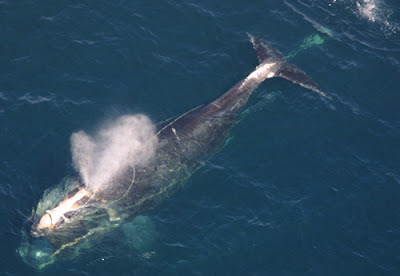 Entangled right whale photo courtesy of the National Oceanic & Atmospheric Administration
Sources:
Much of the information in this article came from "Saving Whales the Easy Way: Less lobstering could mean fewer deaths" by Susan Milius in the January 20, 2007 issue of Science News. Another source was an article by the National Oceanic & Atmospheric Administration about efforts to rescue an entangled North Atlantic right whale.