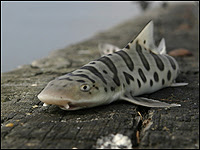 Photo by Mike Liu, iStockPhoto.com
Caption: Baby leopard sharks are popular with aquarium hobbyists, but they can grow to a length of eight feet — far too big for most tanks.

Morning Edition, February 13, 2007 · Federal officials have broken up a major wildlife smuggling ring led by a pastor at a San Francisco Bay area church. The smugglers pulled thousands of baby leopard sharks from the bay, then sold the live sharks to pet stores and private buyers around the world.

Authorities say the operation began many years ago. About that time, the weekly sermon at the Ocean Church in San Leandro, Calif., was devoted to an unusual topic: pet sharks.

"For the past 13 years, Ocean Church has had this little shark business," Pastor Kevin Thompson said. "We catch these baby sharks, this big. And we sell them to pet stores, live."

Thompson's products were baby leopard sharks fresh from the San Francisco Bay. Customers paid up to $40 for each of the one- to two-foot sharks. Fish collectors loved them for their big dark spots and the elegant way they glided through the water.

But the business wasn't legal. Earlier this year, Thompson and five other men pleaded guilty to wildlife smuggling and Thompson was sentenced to a year in jail.

Federal officials say Thompson ran a poaching gang that may have removed as many as 10,000 baby leopard sharks from San Francisco Bay.

At a press conference at the Monterey Bay Aquarium Monday, Lisa Nichols of the U.S. Fish and Wildlife Service, said the poachers caught hundreds of sharks a day during the breeding season.

"A majority of them would just fish, hook 'em, bring 'em in," Nichols said. "If you're out there in the dark and nobody checks you, you take it back to your truck and you're gone. If somebody shows up, they get dumped in the water and the evidence is gone."

The ring began to fall apart in 2003, when a smuggling expert with the National Oceanic and Atmospheric Administration saw a baby leopard shark that was for sale on a Web site and started asking questions. The investigation led him to the Ocean Church and Pastor Thompson and his partners, some who also happened to be his parishioners.

Monday, Nichols and other officials closed the book on this investigation by unveiling a $1.5 million plan to restore some the marshes where the leopard sharks give birth. More than $400,000 will come from Thompson and his partners as part of their sentence, and $500,000 will be donated by the Unification Church of America, to which the Ocean Church belongs. The rest of the money will come from foundations and conservation groups.

Lisa Nichols says the prosecution has helped drive other leopard shark poachers out of the business.

"Once we started openly prosecuting people in this case — after the investigation was at a certain level — word spread fairly quickly in the industry," Nichols said. "Working undercover I tried to make attempts to buy in the last year and it's pretty much shut down."

Towards the end, according to investigators, some of these poachers asked their preacher whether they were doing the right thing. He responded, allegedly, that the poaching was God's will.

After Monday's press conference, Mike Murray said there are many reasons why the trade in baby leopard sharks should never be allowed to recover. One: that baby sharks don't stay that way for long.

Too big, he says, for the fish tank in your living room.