Honey bees' colony collapse disorder might be related to pesticide exposure. For the past decade, beekeepers have treated their hives with pesticides to combat two kinds of mites that parasitize the bees and entomologist Walter (Steve) Sheppard said that the pesticides can accumulate in the wax and reach a concentration that over time harms the bees. 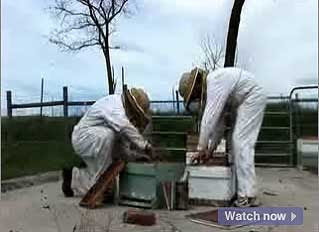 The sudden disappearance of honey bees in many parts of the country might be related to pesticide exposure, according to Washington State University entomologist Walter (Steve) Sheppard.

Beekeepers have struggled as hives have failed soon after the bees embark on their pollen-gathering season. In what has become known as “colony collapse disorder,” honey bees leave the hive and don’t return.

“I don’t think we really know what we’re up against with colony collapse disorder,” said Sheppard. This summer, his research team is exploring the possibility that exposure to pesticides in the hives is contributing to colony collapse.

For the past decade, beekeepers have treated their hives with pesticides to combat two kinds of mites that parasitize the bees.

“To keep bees, especially on a commercial level, beekeepers have needed to use some sort of chemical control of these mites,” said Sheppard. “Normally, Varroa mites will kill a colony within two years, if they’re not treated and the use of these pesticides brings with them a risk of accumulation in the wax.”

Honey bees rear their young in waxy honeycomb which is re-used for several years. If pesticides used to control mites build up in the wax, over time they could reach a concentration at which they harm the bees as well. Sheppard is testing whether something in the honeycomb of a failed colony will carry over and affect the health of a new brood of honey bees.

“We’ve gotten some combs that were from colonies that suffered from colony collapse disorder, and we’ll be doing some experiments to compare them with combs from healthy colonies. We’ll have our [healthy] queens laying eggs on both the collapsed colony combs and the control combs at the same time.”

Sheppard said the study should yield information about the potential role of pesticides in causing colony collapse by the end of the year.

Sheppard said honey bees could also be exposed to pesticides during their foraging flights, if they visit fields and gardens that were recently treated with the chemicals. That source of exposure has been a concern for beekeepers since pesticides came into wide use in the 1950s, he said.

Honey bee health is crucial to the nation’s farmers and fruit growers, who rely on honey bees to pollinate crops such as apples, cranberries and watermelons. Together, honey bee pollinated crops are worth more than nine billion dollars a year to the American economy.

Sheppard directs the Apis Molecular Systematics Laboratory at WSU. He was a member of the Honey Bee Genome Project, an international consortium of scientists that earlier this year published the complete DNA sequence of the honey bee, Apis mellifera.

It is a very nice and good post. Keep up the good work.