We're Not So Unique: Research Shows Birds Have Human Qualities 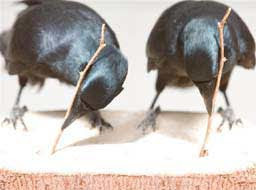 Birds make tools - they even show handedness in making and using tools.

In the Oct 6 issue of Science News, there's an article about crows fitted with tiny "crittercams" that record the crows' use of plant stems to probe for food. These crows, from a South Pacific island, make several types of hooks and saw-edged probes from twigs and leaves.

I saw a film long ago that showed crows sitting on power lines and dropping nuts (or something with a hard shell, I forgot what) into traffic to be crushed by cars - then retrieving the contents when the stoplight stopped the traffic.

Last night, I went to the web site of one of the primary researchers of tool-use in crows, Gavin Hunt of the University of Auckland in New Zealand. I found it by googling "Gavin Hunt crow tools". He has an interesting site: http://language.psy.auckland.ac.nz/crows/our-research.htm.

Dr. Hunt says that crows show cumulative change in tool manufacture, which is very rare or even unique among the few animal species known to make tools. Chimpanzee and orangutan tool manufacture, for example, is often haphazard, and their tools show no evidence of incremental improvements over time. Just for perspective - current human technology is the result of a long series of cumulative changes, says Dr. Hunt. The ‘ratchet-like’ nature of humans' technological evolution means that design changes are retained by populations until new, improved designs arise. Animals other than humans have been generally presumed to lack the necessary cognitive sophistication for cumulative technological evolution.

The crows of New Caledonia (the South Pacific island) that Dr. Hunt studies manufacture two types of tool to capture invertebrates: one from twigs and the other from the long barbed edges of Pandanus leaves. The work of Dr. Hunt has revealed that these tools have four features previously thought to be unique to humans and our ancestors: a high degree of standardization, the use of hooks, “handedness”, and as mentioned above, cumulative changes in tool design. The cumulative changes involve three distinct tool designs using Pandanus leaves: wide tools, narrow tools, and stepped tools. w

What does it mean? To me, it means we're not nearly as unique as we think. I wonder about all the other behaviors we've yet to observe in the creatures that share the planet with us. I want to do what I can to preserve habitat and biodiversity.