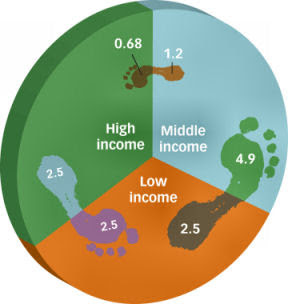 Caption: Color-coded footprints indicate the dollar cost, in trillions, of environmental damage inflicted by high-, middle-, and low-income groups of nations on each of the other two groups.


So, what about all those loans we've made to impoverished nations over the years? Poor countries have borrowed a whopping $1.8 trillion from rich nations like the United States, Japan, and European Nations. When are those pikers gonna pay up?

As it turns out....they may not need to. In fact, by recent reckonings, we should be paying them. Our debt to developing nations, from the environmental damage we've done, now outweighs the total that poor countries have borrowed.

During the last 4 decades of the 20th century, rich nations caused up to $2.5 trillion in environmental impacts on poor countries. Surprisingly, middle income nations such as China and Brazil did about the same amount of damage to the lowest income countries, such as Bangladesh, India, and Nigeria, as the richest nations did.

Researchers at the Pacific Ecoinformatics and Computational Lab in Berkeley, Calif., identified several categories of environmental damages, including climate change, deforestation, and overfishing. Rich nations are disproportionately responsible for these damages even inside the borders of the poorer countries. For example, timber corporations in the U.S., Japan, and Europe are the primary drivers of deforestation all over the tropics, in places such as southeast Asia and South America. We also lead the world in greenhouse-gas emissions (China and the U.S. are #1 and #2). The resulting climate change is causing droughts and floods that are devastating to developing nations with agrarian economies, which applies to most of the poorest nations.

Although patterns of consumption and waste in rich nations are responsible for environmental crises worldwide, the poorer nations will bear the brunt of resource depletion and alterations in rainfall. Lacking the financial resources of the industrialized world, and the options provided by wealth, they will feel the impact of diminishing resources more keenly than the perpetrators. Says Boris Worm, a marine biologist at Dalhousie University in Halifax, Nova Scotia, "The injustice inherent in the current environmental crisis may well exacerbate the divide between rich and poor." An understatement, perhaps.

For more on this topic, see:
1. our upcoming book (Going Green) about the environmental impacts of Americans' consumption patterns, and how choosy consumers can make a difference.

2. our previous post on our visit to a remote African village, where we learned that the villagers hold Americans responsible (rightly so) for the diminishing rainfall that is changing their lifestyle.