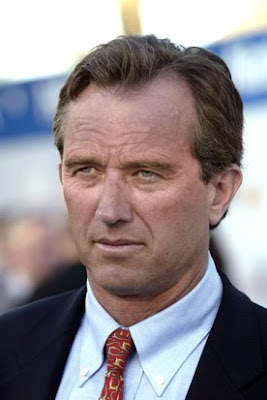 On the evening of March 6 I went by myself to hear Bobby Kennedy Jr speak at Queens University of Charlotte. I was hoping I might somehow be able to hand him a copy of our Going Green manuscript, so he might write a short endorsement for the jacket of the book. Our book does address the environmental impact of factory farming, which is one of Kennedy's pet peeves.

I thought I knew but I was wrong
I didn't know specifically what Kennedy planned to talk about at Queens, except that it would involve the environment. I didn't really want to go out alone; I was tired. I told my friend Beth that I didn't think he would say a lot I didn't already know. But it turned out I was wrong.

Corporations focus only on profits for shareholders
It's true that the general gist of his talk wasn't new to me. If you've seen the documentary "The Corporation" and the video "The Story of Stuff," then you know that corporate America is entirely focused on making profits for shareholders, and that any other considerations are a distant second, regardless of whatever greenwashing comes from their marketing departments. "The Story of Stuff" makes the point that our corporate production model is "linear" and cannot function long in a world with finite resources. It's linear in that we extract raw materials, use them up and dispose of them and their by-products recklessly, rather than recycling them.


Kennedy's talk incorporated these familiar points. But, for me, he put flesh on these ideas and somehow inspired me as few speakers ever have. As an environmental lawyer, and head of Pace Law School's Environmental Clinic, he has spent his adult life suing corporations that pollute, fighting them in court - he has seen their ugliest tactics. He understands the whole frightening picture inside and out.

Here's some of what he said.

First of all he underscored the message in "The Corporation." He said that "corporations' only obligations are to their shareholders."

"Good environmental policy is identical to good economic policy," Kennedy said. A sustainable economic policy would force corporations to internalize the long-term costs of their damage to the environment and communities and labor.

But corporations are allowed to exploit and degrade nature because they use campaigns and lobbyists to get their hooks into the federal government.

Kennedy talked about the Bush administration's 400 rollbacks of environmental progress that had been made over the last few decades. The rollbacks, he said, are listed on the NRDC website.

Crony capitalism
In his talk, he cited case after case of industry honchos whose "other career" is safeguarding the very resources their industry exploits and destroys. For example, Philip Cooney was the head of the Council on Environmental Quality for the Bush administration until a couple of years ago. But before that, he was the chief lobbyist for the American Petroleum Institute. Another example: the head of the U.S. Forest Service was previously a timber industry executive. Kennedy called this "crony capitalism." The Bush government allows the fox to guard the henhouse, again and again.

Why do we as Americans passively permit this to happen? Kennedy said that five corporations control all radio, all TV, and 80% of American newspapers. "Americans," he said, "are the best entertained and the least informed population in the world." He quoted Thomas Jefferson, who said you can't have a democracy for very long with a public that is uninformed.

A couple of things surprised me about Kennedy's talk. He loves our country, and he said partisanship is not constructive. He said he is not an environmentalist, rather he is a free-marketeer who pursues the cheaters - the corporations who damage our natural resources and leave the mess for others to deal with.

Nature is America's unifying theme
He said nature is the unifying theme of American culture, and he backed this up convincingly. He tied in his spirituality, too, saying that wilderness is the undiluted work of the creator. He talked with warmth about fishing and camping with his sons. Wilderness is the way God communicates with us most forcefully, he said, "with clarity and texture".

His speech was beyond moving. If I was a person who cries easily, I would have been weeping. Instead I just had to marvel at the case he made for our wild lands and our clean water and our health. They are everything - not only our cultural heritage and our spiritual connection, but our social foundation.

Nature and our natural resources are our history, and everything we need for the future.

I'll be listening to Bobby's radio show from now on.. I want to hear more details. He's co-host of "Ring of Fire," on Air of America radio. I've ordered his book, which I can't wait to get my hands on:

Crimes Against Nature: How George W. Bush and his Corporate Pals Are Plundering the Country and Hijacking Our Democracy

I didn't get to talk to Kennedy, and I suppose he won't write a jacket blurb for this book, as he kindly did for my last one. But I am a wiser person for having heard him. What a mistake it would have been to stay at home.