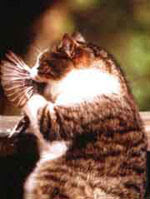 Housecat with Yellow-rumped Warbler, photo courtesy of American Bird Conservancy
Here in the South our local birds are well into their nesting season. Around the yard I've seen active nests of robins, cardinals, and Carolina wrens in the trees and shrubs. Won't be long before their young are fledging and at their most vulnerable stage.

The migratory warblers that nest farther north are coming through our area too, from their wintering grounds in Latin America. We can hear their calls in the trees behind the house.

The chipmunks are up and about too. The entries to their nest holes are tidied, and I see the mamas darting around the yard looking for anything edible. The little nurslings are underground now, but they'll be up above ground soon. Last year I saw a mom with three babies, all sitting straight up like little meerkats.

I love this time of year. But I hate it too - because I know before long I'll see my neighbors' cats carrying songbirds and struggling chipmunks out of my yard. If this year is like last year, I'll see the cats hunting in my yard every single day.

Scientists estimate that housecats in the U.S. alone kill close to a billion birds every year. They also kill around a billion small mammals annually. (See links to publications below.)

There is nothing "natural" about housecats preying on native wildlife. Cats are an introduced species, and like kudzu or honeysuckle, they are not affected by the natural checks that limit the numbers of native species. Housecats are kept in prime hunting condition by the feeding and medical care they receive from us. They are far more efficient hunters and are far more numerous than any naturally occurring predator ever was. Unfortunately, bird populations are already suffering from habitat loss and other human impacts. House cats are one additional blow - one that we could control easily.

If you have a cat, you might want to know that hanging a bell on the cat does not work, nor does declawing. The only thing that stops cats from killing native wildlife is keeping them indoors.

I did, a couple of years ago, go talk to my neighbors about their cats. I begged them to keep the cats indoors. I gave them reprints of all the articles cited here. But they said the kitties would be unhappy indoors, so the kitties still roam.

Here are some great articles from the Humane Society, the American Bird Conservancy, and other respected sources about the merits of keeping cats indoors:

HSUS, the Humane Society, has a great paper about the benefits to cats of living indoors, including the improved life expectancy. Indoor cats are safe from cars and other accidents, and have fewer illnesses.

The American Bird Conservancy has some great articles and fact sheets about the impact of housecats on wildlife, including materials for educators. One of their interesting fact sheets is "Human Attitudes and Behaviors Regarding Cats", which says:

A 2006 paper by ecologists in Wisconsin lists a number a resources and other papers that will be useful to anyone researching this topic.

I would love to hear from readers any other stories of neighborhood cats on the prowl, with good endings or bad.

Our neighbors have a few that are allowed to roam free and they continuously kill the neighborhood birds. Not only that, but one of them goes through my garden and destroys plants! I never heard of a cat digging up bulbs and flowers before, but this big grey evil thing does just that!

I wish it were legal to just shoot them. I was at the garden store today, and my wife wouldn't let me buy this gigantic metal rat-trap. I wanted to put it where that awful cat would be sure to step on it.

Maybe I'll find some kind of electric fence that will give it a good jolt.

So far, I opted for this "Scotts" cat and dog repellent stuff, but it does not look promising. It will probably make my yard stink too, which will completely ruin the whole experience of sitting next to my lilies, hemerocallis, aromatic surfinias and pelargonias...

I hate cats too, dirty creatures. I hate being in a house where cats are roaming over the kitchen worktops etc. I am driven mad by them doing their dirty business in my soil, especially my veg patch.
I have found that they can be kept off garden plants by eucalypus oil. In the UK there's a branded decongestant called 'olbas oil' and I sprinkle drops of that onto tea bags and then bury them just under the soil. The horrible creatues avoid those areas where the oil is.

Wow, just last night I saved a rabbit from a stray cat, then this morning I found a dead bird that he had killed, then right before I left for work my cat showed up at the door carrying a snake in his mouth.

As for the guy above me, there's some device out there that keeps cats away with some frequency that only they can hear. I can't remember the name of it, though...

Although you may have reason in some aspects, the natural thing is for the animals to live outside, not inside homes.
If there's a small number of birds, is it because of cats or because of humans ?
Namely because of construction (including the house that you live in) and the polution that we make ?
And would you like to be an indoor citizen ?

Wow. How can there be so many cat haters? (Not the author of the blog post, but the other commenters.) Cats are just animals like all others.

I'll admit, I love cats. I really do. I have two of them. And while I know they'd just love to run around outside hunting birds and small mammals and being as fully feline as they could be, they will remain indoor housecats as long as I'm alive.

Because I love birds too. It is possible, you know, to love cats AND birds AND fish AND mice (although I'll admit mice are harder for me to love.) And I believe that in the larger environmental picture, it's best for my beloved, restless kitties to stay inside.

Oh, and to Jane -- cats are dirtier than dogs? Cats are fastidious about cleaning themselves and each other. Dogs don't seem to care if they're clean or dirty. (Of course, maybe you don't like dogs either.)

To Jose
I am very fond of cats. But there is very little about the domesticated cat that is natural. They have lived with humans for thousands of years and they are quite content to live in or out of doors. The problem for wild birds is largely human destruction of their habitat but cats go along with the humans. They are horribly destructive little beggars, We can't stop most construction but we can keep our cats indoors, safe, healthy and away from the birds.

Jose
The truth is,we ARE indoor citizens. Cats have lived with humans for many thousands of years and it is no more natural for domesticated cats to live outdoors than it would be for you or me to live outdoors. You have a point about habitat destruction, but cats go with the humans! You can't stop construction, but you can keep the cats indoors, happy, healty and away from the birds. By the way, I am very fond of cats, have two and they go out under supervision, just as my dog does.

I love my kitty. He is an indoors cat. And if he wants to go outside I put a harness and leash on him. After all, we do have a leash law and whether or not people want to admit to it, it is for both dogs and cats. And I cannot believe how many cat haters read this blog!

Hi Robj98168
I know it must be distressing to see negative comments about cats. I don't hate cats, it's just that I love wildlife, and I am filled with fear for the future of wildlife on this planet. I like indoor cats. When I was a young kid, my family had a bunch of cats and I loved them passionately. None of them were spayed and they had kittens constantly. We must have had an "empty forest" zone around our house, but I was too ignorant to consider that. As for now...I think readers are just frustrated at being powerless to stop neighbors' cats. It is incredibly frustrating for me. Thank you for keeping your cat indoors.

I yam a cad. Ees eed OK to eead peegeons here een New York Seedy? I hab nebber eaden one, bod I leeb een hope. I yam an ou'side cad, bod my ou'side space ees the rooftarps. You hab a lard ob angry people een here. Maybe eef they had a nice sarft card to stroghe they wou' nard be so mad.