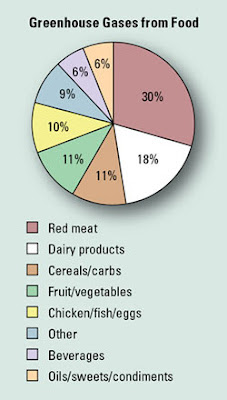 Buying local is the current mantra for earth-friendly foods. Since writer Sage Van Wing coined the term "locavore" three years ago, many environmentalists consider "food-miles" (the distance traveled from farm to fork) as the best measure of food's impact on climate change.

No doubt about it, buying local is good for more reasons than one. It keeps your dollars in your own community, supports family farmers who use sustainable methods, and generates fewer emissions from cross-country trucks. But it turns out that buying local is not the "greenest" diet choice you can make. According to a new study just published in the journal Environmental Science & Technology, the amount of red meat and dairy you consume has a far greater impact on greenhouse gases than the distance your food traveled.

Using data from the U.S. Departments of Commerce, Agriculture and Transportation and other sources, authors Christopher Weber and Scott Matthews of Carnegie Mellon University calculated the total greenhouse-gas emissions generated in making and transporting a variety of foods. They concluded that red meat and dairy are responsible for nearly half of all greenhouse gas emissions from food for an average U.S. household. (See pie diagram above by Christopher Weber/Rhonda Saunders, from Env. Sci. and Tech.) That's because the production of red meat and dairy generates much more greenhouse gases than the production of any other kind of food, and much more greenhouse gases than all food-related transportation.

The emissions start with the clearing of land for grazing or for raising animals' feed-crops (clearing often involves burning and thus releases carbon dioxide). The chemical fertilizers used for livestock feed-crops are converted to nitrous oxide, another greenhouse gas, by soil bacteria. Cows' burps and the storage of manure in open "lagoons" both release large amounts of methane, another greenhouse gas that traps about 20 times more solar radiation molecule per molecule than carbon dioxide does. "There is more greenhouse-gas impact from methane and nitrous oxide than from all the carbon dioxide in the supply chain [for all our foods]," Weber says. In large part, he adds, this is because nitrous oxide and methane emission in the production of red meat "blows away CO2".

Much of this information is not entirely new. Researchers with the United Nations' Food and Agricuture Organization published a landmark paper last year detailing the environmental impact of the world's growing numbers of livestock. If you're interested in the environmental damage caused by livestock, this document ("Livestock's Long Shadow") is one you don't want to miss. It's loaded with great information. Although it's long and detailed, the Executive Summary within the document is only 3 pages and hits all the high points.

The authors of the new study from Carnegie Mellon calculated that shifting your diet one day per week from red meat and dairy to chicken or fish or vegetables will reduce greenhouse gas emissions more than your buying all local foods all the time.

They didn't go into the environmental impact of fish farms, overharvesting of wild fish, or factory farms of poultry. But we cover all that and more in our new book Going Green: A Wise Consumer's Guide to a Shrinking Planet (May 2008).

If you really want to help the planet, eat vegan. And it pains me to say it, because I love cheese. I really really love pepper-jack cheese melted on rosemary olive-oil bread. Oh-my-God, what bliss and comfort. That's the last vestige of animal products in my diet. But with this new study, I don't know that I can keep rationalizing it. Maybe I can find some soy cheese that sort of tastes like cheese. Can any readers recommend a good brand? I have to try.

Sources:
Christopher Weber and H. Scott Matthews. "Food-miles and the relative climate impacts of food choices in the United States." , (), –.

Erika Engelhaupt. "Do food miles matter?" Environmental Science and Technology. April 16, 2008. [Pie diagram above is from this article.]

SEE THIS POST NOW ON REUTERS
Posted by Sally Kneidel, PhD at 5:42 PM

I've just decided to go cheese-less rather than trying my hand at faux cheese. Maybe I'll change my tune as time goes on. I have, however, become a big fan of Silk - particularly of their chocolate milk, which has no nutty soy taste to speak of. So,m at least you've got your milk substitute covered. :)

It keeps your dollars in your own community

"Keeping your dollars in your own community" makes about as much sense as keeping water in your local watershed. Let money flow where it will and we all benefit.

hi guys nice site, in regards to cows -
This is true in the case of factory farming, with grains being grown for the cows.(not a natural part of their diet)
A local grass-fed herd is way down the scale in terms of resources used- i.e traditional farming
.I seem to remember that the
"long shadow" ultimately recommended factory farming as the best option. hmmm...
There is the belief that a vegan diet would be better for out planet, how sustainable is soya from argentina?