Taking Rosa's good advice, we veered up the road into Huaraz and the Peruvian Andes 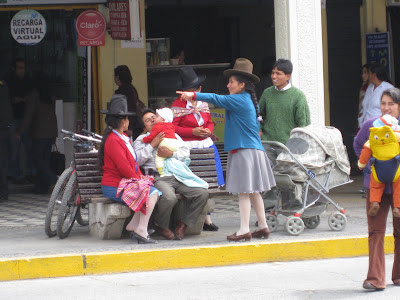 Rosa looked concerned. "Why are you going to Huancayo?" she asked, brow furrowed. Rosa Vasquez Zanetti runs a travel agency out of her family's inn where we were staying, on the Amazon River in Iquitos Peru. Rosa had been so helpful already, I'd asked her to look over our plans for the Andes.
"We picked Huancayo at random - because it's a small mountain town with no Americans, and not too far from Lima by bus," I answered.

"But...that's not the best plan," Rosa continued, in her soft-spoken way. "For birding and trekking, you should go to Huaraz in the Cordillera Blanca. And you should ride the Cruz del Sur bus from Lima. It travels during the day and makes no stops so it's safer." Night buses that make frequent stops are vulnerable to occasional muggings, as we heard from more than one source. 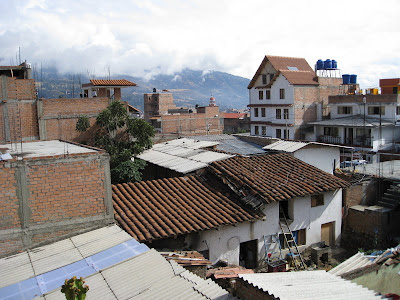 a view of Huaraz from Zarela's hostel
"Stay at Zarela's hostel in Huaraz for a couple of days to get acclimated," Rosa told us. "Then from there, you can go up to Llanganuco Lodge and Llanganuco Lake. You'll like that better than Huancayo."

Rosa arranged it all. As it turns out, the Cruz del Sur bus does make pit stops on request (the onboard bathroom is for liquids only, the driver announced). But no scheduled stops. And it didn't freak me out like I feared it would, swooping around mountain curves with no guard rails. I just didn't look out the window. 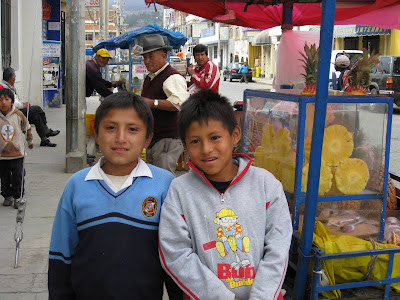 kids of a Huaraz street vendor
We loved Huaraz - at 10,200 feet, the highest place we'd ever spent the night. (Click for map.) We loved La Casa de Zarela too, a first-class backpackers' hostel with hot water, great views, and helpful staff, especially spunky owner Zarela Zamora (online reviews and contact info). Most of the guests staying there left early in the morning on treks or climbs arranged by one of the local trekking companies. Huaraz (and Zarela's) are featured in Outside Magazine as the mecca for mountain adventurers in the northern Peruvian Andes. Nestled between the Cordillera Negra (brown peaks) and the Cordillera Blanca (frosted peaks), Huaraz is within spitting distance of some of the world's highest summits. The Cordillera Blanca has more than 50 peaks of 5700 m (18,700 feet) or higher. North America has only three; Europe none. (Click here for a Huaraz trekker's online journal entry.)

Much of the adobe town was leveled by an earthquake in 1970 that killed 20,000 people in Huaraz alone - half the population. The town has been rebuilt, this time with rebar reinforcement in every wall. In fact, a good proportion of the homes and buildings still have rebar poking out the top. But the funky construction and the steep cobbled streets just add to the town's personality - a blend of local enterprise and Andean indigenous culture, along with the trekkers, birders, and wanderers like ourselves. 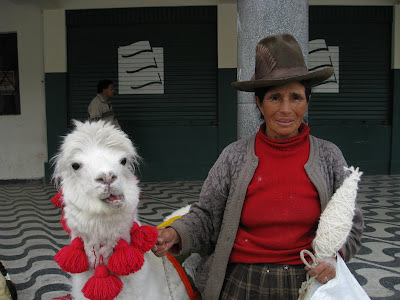 a Huaraz weaver and her alpaca
I spent our time in Huaraz skulking around the town, trying to get pics of Andean street scenes and the beautiful Quechua women who were everywhere, with their long thick braids and brilliantly colored hand-woven clothes and baby-slings. In the afternoons and evenings, indigenous women from outlying farms and villages set up stands or spread blankets on the sidewalk to sell produce or woven items. They all wore traditional fedora-style hats, often with an arrangement of feathers lying flat against the felt. Most of the women didn't want their picture taken, even when I asked politely. But a few acquiesced, a couple of them even asked me to mail them prints. It was a blissful day for me, I can't say why exactly - one of those few days where the world seems a lovely place; I felt grateful to be alive and well. 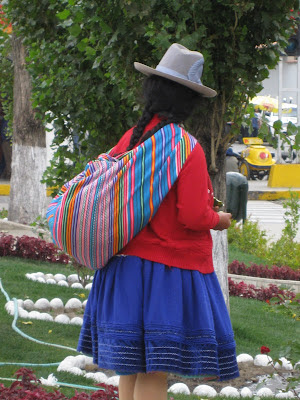 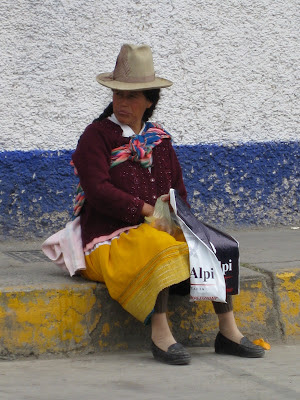 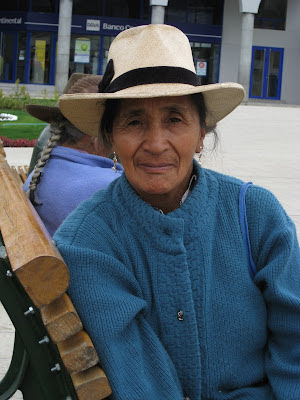 After just one day of acclimating in Huaraz, and scampering about annoying people with my camera, we hired a taxi driver from Yungay to take us to Llanganuco Lodge at 11,500 feet, and later Llanganuco Lake (12,500 feet) in Huascarán National Park. The lodge is right smack at the base of snow-covered peaks Huascarán and Huandoy. At 22,200 feet, Huascarán is the highest tropical peak in the world. I'll tell you about the National Park and the lodge - and altitude sickness - in my next post. Between our amoeba issues along the Amazon and altitude sickness in the Andes, we had a few sick days. But that's all forgotten now. I said in my previous post that I'd move to Iquitos in a heartbeat; I'll have to include Huaraz as well. If a job opened in either place, I'd be gone in a flash. 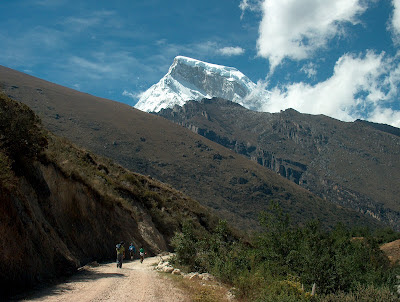 All other photos, and text, by Sally Kneidel

Hi, I'm a US citizen who lives in Lima. I really enjoyed your entries about Huaraz and Iquitos. I've visited Huaraz and Cajamarca, but have never been into the Amazon area. Huascaràn was a challenge, but luckily, we didn't feel the altitude much, being from Colorado and Wyoming. These days, after spending 2 years in Lima, I imagine the altitude would knock me flat.

Thanks for the photos and a great blog!