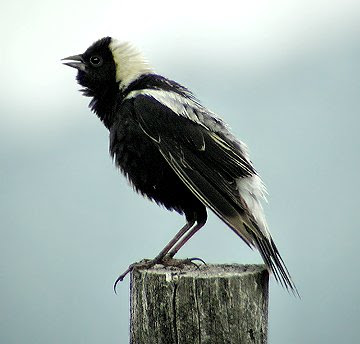 The article below is by Bridget Stutchbury, Professor of Biology at York University in Toronto and author of "Silence of the Songbirds".

Though a consumer may not be able to tell the difference, a striking red and blue Thomas the Tank Engine made in Wisconsin is not the same as one manufactured in China — the paint on the Chinese twin may contain dangerous levels of lead. In the same way, a plump red tomato from Florida is often not the same as one grown in Mexico. The imported fruits and vegetables found in our shopping carts in winter and early spring are grown with types and amounts of pesticides that would often be illegal in the United States.

In this case, the victims are North American songbirds. Bobolinks, called skunk blackbirds in some places, were once a common sight in the Eastern United States. In mating season, the male in his handsome tuxedo-like suit sings deliriously as he whirrs madly over the hayfields. Bobolink numbers have plummeted almost 50 percent in the last four decades, according to the North American Breeding Bird Survey.

The birds are being poisoned on their wintering grounds by highly toxic pesticides. Rosalind Renfrew, a biologist at the Vermont Center for Ecostudies, captured bobolinks feeding in rice fields in Bolivia and took samples of their blood to test for pesticide exposure. She found that about half of the birds had drastically reduced levels of cholinesterase, an enzyme that affects brain and nerve cells — a sign of exposure to toxic chemicals.

Since the 1980s, pesticide use has increased fivefold in Latin America as countries have expanded their production of nontraditional crops to fuel the demand for fresh produce during winter in North America and Europe. Rice farmers in the region use monocrotophos, methamidophos and carbofuran, all agricultural chemicals that are rated Class I toxins by the World Health Organization, are highly toxic to birds, and are either restricted or banned in the United States. In countries like Guatemala, Honduras and Ecuador, researchers have found that farmers spray their crops heavily and repeatedly with a chemical cocktail of dangerous pesticides.

In the mid-1990s, American biologists used satellite tracking to follow Swainson’s hawks to their wintering grounds in Argentina, where thousands of them were found dead from monocrotophos poisoning. Migratory songbirds like bobolinks, barn swallows and Eastern kingbirds are suffering mysterious population declines, and pesticides may well be to blame. A single application of a highly toxic pesticide to a field can kill seven to 25 songbirds per acre. About half the birds that researchers capture after such spraying are found to suffer from severely depressed neurological function.

Migratory birds, modern-day canaries in the coal mine, reveal an environmental problem hidden to consumers. Testing by the United States Food and Drug Administration shows that fruits and vegetables imported from Latin America are three times as likely to violate Environmental Protection Agency standards for pesticide residues as the same foods grown in the United States. Some but not all pesticide residues can be removed by washing or peeling produce, but tests by the Centers for Disease Control show that most Americans carry traces of pesticides in their blood. American consumers can discourage this poisoning by avoiding foods that are bad for the environment, bad for farmers in Latin America and, in the worst cases, bad for their own families.

What should you put on your bird-friendly grocery list? Organic coffee, for one thing. Most mass-produced coffee is grown in open fields heavily treated with fertilizers, herbicides, fungicides and insecticides. In contrast, traditional small coffee farmers grow their beans under a canopy of tropical trees, which provide shade and essential nitrogen, and fertilize their soil naturally with leaf litter. Their organic, fair-trade coffee is now available in many coffee shops and supermarkets, and it is recommended by the Audubon Society, the American Bird Conservancy and the Smithsonian Migratory Bird Center.

Organic bananas should also be on your list. Bananas are typically grown with one of the highest pesticide loads of any tropical crop. Although bananas present little risk of pesticide ingestion to the consumer, the environment where they are grown is heavily contaminated.

When it comes to nontraditional Latin American crops like melons, green beans, tomatoes, bell peppers and strawberries, it can be difficult to find any that are organically grown. We should buy these foods only if they are not imported from Latin America.

Now that spring is here, we take it for granted that the birds’ cheerful songs will fill the air when our apple trees blossom. But each year, as we continue to demand out-of-season fruits and vegetables, we ensure that fewer and fewer songbirds will return.