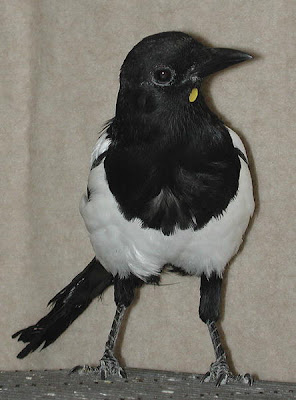 Magpie with a yellow mark on its neck
It's not really that birds are getting smarter, just that we're continuously gathering more evidence about how smart they really are. One of the smartest birds ever studied was Alex the African gray parrot. Irene Pepperberg of Brandeis University showed that Alex could count up to six items, and had more than 100 vocalizations for objects, actions, and colors. But Alex is not news, even though he's very famous. His accomplishments have been well-documented for years. He died not long ago.

But new research keeps turning up all the time. The latest buzz on bird intelligence comes from Germany, from Helmut Prior at Goethe University. It involves self-recognition, a capacity at one time attributed only to humans. In biology, the litmus test of self-recognition is to recognize that the image in a mirror is oneself.

We know now that a few nonhuman animals share this ability, but so far, the list of species is very short. The usual way behavioral scientists test for self-recognition is put a bright mark on an animal's face or neck, and then place the animal in front of a mirror. If the animal uses the mirror to inspect or touch the mark on itself, that's considered evidence that the animal recognizes the image as itself.

Up until now, only humans, apes, bottlenose dolphins, and elephants have been shown to respond to a mirror image this way. Other animals often react to their mirror image as though it's a different individual. I've seen male Anolis lizards make aggressive displays toward a mirror, as though the image was a different male making its own aggressive displays. The lizard sometimes gets madder and madder, when the "intruder" refuses to back down!

But Helmut Prior has just published research showing that magpies have joined the ranks of self-recognizing animals - the first birds to be included.

In the experiments, each of five magpies was given the option of entering a chamber with a mirror, alone. Three of the magpies preferred the mirror chamber to an adjoining chamber without a mirror, taking time to inspect the mirror image, looking behind the mirror, and moving around in front of the mirror.

Then the researchers marked each magpie with a spot of paint on the front of the throat (see photo at the top of this post). The three magpies that had previously inspected the mirror now used the mirror to carefully inspect the paint spot, turning their heads and tilting their necks close to the mirror. Two of them scratched off the the spots with their feet, while looking in the mirror. When the mirror was not present, these three magpies ignored the spot.

Illustration from the original PLoS Biology article by Helmut Prior et al.
(A) Attempt to reach the mark with the beak; (B) touching the mark with the foot; (C) touching the breast region outside the marked area; (D) touching other parts of the body. Behaviors (A) and (B) entered the analysis as mark-directed behavior; behaviors (C) and (D) and similar actions towards other parts of the body were considered self-directed, but not related to the mark.

What about the other two magpies? Throughout the experiment, the other two birds reacted as though the bird in the mirror were a stranger, jumping and running around the compartment, regardless of whether they had a paint spot on their neck or not.

Chimp studies have found that mirror self-recognition declines with age - this may be the case with these two magpies as well. Or maybe it's just individual variability in intelligence.

So what does it mean, that some magpies recognize their own image? This is important to me because it's evidence that we're not as special and entitled as some people think we are. Other animals are smart too. My hope is that, as we eliminate the capabilities that distinguish us from other species, we'll realize they are sentient, and as sentient beings, they deserve more consideration than we give them. Wishful thinking probably, but it makes sense to me.