I got an appalling email from wildlife-activist Richard Thomas of TRAFFIC last week.

Wrote Richard, "Did you see the story I posted on the TRAFFIC website yesterday - an extraordinary haul of around 900 dead "oven-ready" owls, plus more than 7000 Clouded Monitor Lizards in Malaysia. It appears they were destined for China. First time we've come across owls in the 'meat trade' in this part of the world."

"The 900 owls piece got quite a bit of press coverage - the raid was made by Malaysian police, following information received about a cargo being readied for export to China," Richard continued a couple of days later.

Richard and I have been corresponding a little about my efforts to share my own writing about the illegal trade in wildlife, and my efforts to promote the work of TRAFFIC. I had recently sent him a link to my post on the wildlife trade in Iquitos Peru.

Due to the enormity of the haul of owls, and its proximity to Thanksgiving, when millions of birds will be roasted here at home (albeit legally), I want to reprint TRAFFIC's article in its entirety below. 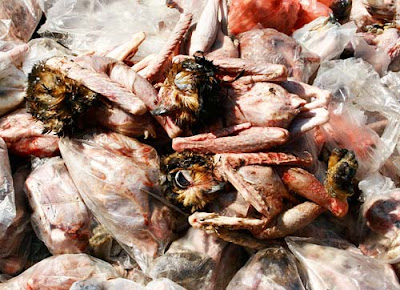 A local man was arrested and remanded in custody for three days, but pleaded not guilty and was released on bail of MYR19,000 (USD5,300).

Information obtained during the raid led to a second raid on a storage facility in Segamat, Johor, on 7 November 2008, when 7,093 live Clouded Monitor Lizards were seized, but no arrests made.

“This is the first time we know of where ‘ready-prepared’ owls have been seized in Malaysia, and it may mark the start of a new trend in wild meat from the region. We will be monitoring developments closely.”

All the animals seized are believed to have originated in Malaysia and were probably bound for China, to be sold in wild meat restaurants.

All are protected to some degree under Malaysian national legislation, and most are listed in CITES (the Convention on Illegal Trade in Endangered Species of Wild Fauna and Flora), with Clouded Monitor Lizard and Sun Bear in Appendix I, which prohibits international trade, whilst most other species, including all the owls, listed in Appendix II, which restricts such trade.

“Malaysia is home to a vast array of amazing wildlife,” said Shepherd. “However, illegal hunting and trade poses a threat to Malaysia’s natural diversity.

“TRAFFIC applauds the actions taken by Perhilitan, and urges the public to report cases of illegal hunting and trade to the authorities.

“TRAFFIC also encourages countries where these cargoes are bound to be vigilant to prevent the illegal import of wildlife from Malaysia and elsewhere.”

Malaysia is a member of the ASEAN Wildlife Enforcement Network (ASEAN-WEN), a partnership that seeks to end illegal cross-border wildlife trade in the region.