How to Buy a Used, Fuel-efficient and Green Car 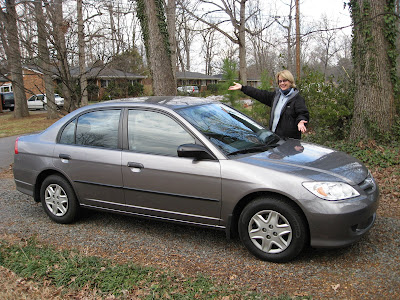 Our "new" but used car
We’ve been wanting to buy a more fuel-efficient car for some time, but, given our financial insecurities, we’ve been putting it off. Finally, we were forced into action when our 14-year-old Volvo was totaled in a December accident. The question was thrust upon us: what to buy as a replacement?

Reluctantly, we ruled out a Prius. We'd love to be really really green, but we just can’t or won't commit to the expense of a brand new car. Luckily, plenty of other cars beat out the old Volvo on both gas mileage and emissions ratings. That's what we learned from www.greenercars.org, which offers ACEEE’s Green Book. The Green Book and the website have a list of the “Greenest Vehicles of 2008.” The cars are rated by emissions as well as by gas mileage – very helpful. The top 12 cars on this list include four hybrids and several very small cars such as the Mini Cooper, the Honda Fit, the Smart ForTwo, and Toyota Yaris, which are too small for us. We found ourselves homing in on two from the list: the Honda Civic and Toyota Corolla. The www.greenercars.org website offers ratings of older cars too, but you have to pay for that. Hmmm.....we definitely had to have a used car.
Then we spotted on www.cars.com a page that lists the top 25 cars from 2004-2008, rated in terms of gas mileage. Numbers 1 and 2 were the Prius and the Honda Civic Hybrid, but 3 and 4 were the Honda Civic and Toyota Corolla. Yay. That cemented our search for those two in particular. This site gives the mileage for the Civic as 34-39 highway; for the Corolla 34-37 highway.
A couple of other websites, www.fueleconomy.gov and www.safercar.gov were helpful in theory, although we didn't actually use them very much.

Once we knew what we wanted, we started looking for our car in 5 different places:
www.cars.com
www.autotrader.com
http://autos.yahoo.com
The classified ads in our local newspaper (The Charlotte Observer, which has a “Drive” section on Saturdays)
Auto Trader, a $1 weekly paper magazine available in convenience-store gas stations
The three websites above are incredibly helpful if you’re looking for a used car. Each has a search engine that allows you to enter your zip code, how far you’re willing to travel, the mileage you want, the model by year, the model by manufacturer, the price range, etc. For example, we could look for a 2005 Honda Civic within 30 miles, with no more than 50,000 miles, for $10,000 or less, available from a private party. Which is what we did – eventually. Before that, we spent a lot of time diddling around, looking at used cars from dealers. That turned out to be a waste of time because their used cars all had some history of being used as a rental car, or some minor accident, or multiple owners, or something that was a red flag. None of the dealers would come down to a price that we were willing to pay.
We learned that checking the VIN (vehicle identification number) on a used car is essential – you have to pay for an online service like Autocheck or Carfax to get a specified time period of unlimited checks. Then when you type in a car’s VIN number, you get a report on any and all accidents the car has been in, plus how many owners it’s had, whether it has been sold at auction, or has failed emissions tests during inspections, etc. That saved us from buying a beautiful 2006 Honda Civic that we were swooning over – but it had been totaled and restored, we learned from AutoCheck. What’s worse, we would not have been able to get any collision insurance at all on that car, because it had been totaled and restored, or “salvaged.” A “salvage title” is, for our insurance company at least, uninsurable.
Sadly, we resumed our search, looking a little farther out of town. We went to see a 2005 Honda Civic 30 miles away, for sale by a private owner. 40,000 miles. One owner. Driven only to take the kids to school and back. No scratches. New tires. We had it checked out by a mechanic in that town, and he said it had no problems.
We wanted it, so we had to check the average price for our area, which we did easily by checking three free websites:
www.kellybluebook.com
www.nadaguides.com
www.edmunds.com
The most useful of these three websites, in anyway, is Kelly Blue Book. The owner had already checked, and his asking price matched almost exactly the KBB value for a private-party sale of a 2005 Honda Civic in “Good condition.” Since the car was in excellent condition, we didn’t have much leverage, but the seller did come down $200 after I complained that it had no side airbags.

To finish the deal, we had to get a cashier’s check, go to a notary with the seller to transfer the title, go to the DMV to get a new plate, and we were set. We had our little Honda. We call her Smacky, and she seems brand new. We’re thrilled. We expect her to last another 150,000 miles. Hey, even our 1996 Nissan van has made it to 149,000. And the Honda is a much better car.
We're testing the gas mileage now on the Honda, but it's been almost a month and we still haven't had to refill the tank! Yay! I'm glad we took the time to find what we wanted.

Thank you for posting this very helpful informationa. Happily, I'm not in the market for a car now but my next one will definitely be a used car and I will keep your tips in mind.

If you move forward to buy a car, here is a tip:

When buying anew car you should bring a piece of paper to the dealership and make sure you do all the math of the finance calculations yourself. The point is not that they will do the math wrong. The point is you will see exactly how the deal is structured. Do not be afraid to take the time to do this or look like a fool.

Here are five other steps that may save you thousands if you follow them next time you buy a car: http://www.butasforme.com/2009/03/29/how-to-buy-a-new-or-used-car/

Thanks for the comments.
I appreciate your added tips, Ju. I'll look at the url you sent and save it for next time! Thanks again for the contribution!
Sally Kneidel

The principles of AutoSellerNetwork set out to revolutionize the way people buy and sell vehicles. For more information to buy a used car online.

Too good. Thanks for sharing such a brilliant tips on buying the used car. My first dream car was an used car from acar2go dealers. It was too good. Still in good condition like the new one.

Auto research information can be very important for many people, and
Automotive.com is a comprehensive automotive destination featuring
industry-leading new and used car buyer's guides with detailed pricing information, a huge classifieds section and a nationwide cheap gas price
finder tool among many other features. A great and unmatched advantage of our site is its enthusiast section (http://www.automotive.com/auto-enthusiast/index.html) - hot rodding, tuning, off-roading, and motorcycle content, plus many others, are covered via hundreds of thousands of authoritative, full-text articles and images featured on Automotive.com through our exclusive content partnerships with Motor Trend, Hot Rod, Import Tuner and Off-road magazine, among many others.

If you have time, it'd be great if you could check out the site and see if it'd be a beneficial resource for you.

Thanks for sharing such a brilliant info and tips on buying the used car.
How to Buy

I don't have any words to appreciate this post.....I am really impressed .

Be sure that you will seek advice from legitimate and reliable suppliers as this is a good technique to ensure the shape of the cars you will buy.

Definitely, full marks to the blog post subject. A used car buyer should ask and answer the 'when' question? Timing could be decisive factor when it comes to buying of a used car.I am looking for some car parts in Warren oh to fix up my car with. I have been looking to fix up my car for awhile and now I have the money to. I need to find the highest quality stuff for my car.I really appreciate for your sharing
Used cars for sale