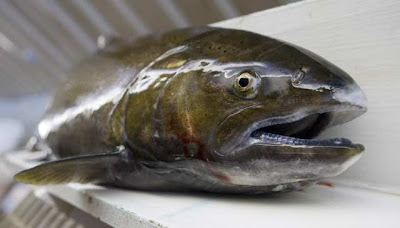 Salmon: photo courtesy of http://latimesblogs.latimes.com
Forty percent of fish species in North American streams, rivers, and lakes are now in trouble. That's according to a detailed new evaluation of their conservation status by scientists from Canada, Mexico, and the U.S. Geological Survey. The report was just published by the American Fisheries Society in the journal Fisheries.

The 700 fishes now listed as imperiled represent a whopping 92% increase over the 364 listed in the previous report 20 years ago. Of those 700 imperiled fishes, 280 were listed as endangered, 190 as threatened, and 230 as vulnerable.

Said Mark Myers, director of the USGS, "Freshwater fish have continued to decline since the late 1970s, with the primary causes being habitat loss, dwindling range, and introduction of non-native species. In addition, climate change may further affect these fish."

Unfortunately for American consumers, the fish most at risk include many that are popular with sportsmen and commercial fisheries, such as salmon and trout of the Pacific Coast and western mountain regions. More than 60% of the salmon and trout species surveyed had at least one population or subspecies in trouble. Twenty-two percent of sunfishes (a family that includes popular black bass, bluegill, and rock bass) were listed.

Areas with especially high numbers of imperiled fish include the Southeast, the mid-Pacific coast, the lower Rio Grande, and basins in Mexico that do not drain to the sea.

This is the third list compiled by the American Fisheries Society's Endangered Species Committee. Of the fish on the 1989 imperiled list, only 11% have improved in conservation status. The remaining 89% are more at risk or have stayed the same.

"Fish are not the only aquatic organisms undergoing precipitous declines," said USGS researcher Noel Burkhead, chair of the AFS Endangered Species Committee and a lead author on the report. "Freshwater crayfishes, snails and mussels are exhibiting similar or even greater levels of decline and extinction."

What about that seafood dinner you have planned??

If you plan to continue eating fish, check out the Seafood Selector on the website of the Environmental Defense Fund, at http://www.edf.org/page.cfm?tagID=1521&redirect=seafood. See their "Eco-Best", "Eco-OK" and "Eco-Worst" lists of seafood, easy to understand at a glance. The webpage has lots of other information about eating fish, including fish recipes, fish substitutions, and information about pollutants such as mercury.

Our 2008 book Going Green has a section on fish called "Seafood - Here's the Catch." In this section we describe destructive mass-fishing techniques such as blast fishing, longlines, and gill nets. Sadie reports on a couple of disturbing interviews with fisheries professionals, who report that workers pee into the fish-stick vat, drop boots into the mix, etc. We were surprised too at what we learned while researching farmed fish. Most of the fungicides, dyes, antibiotics, and pesticides dumped into the cages of farmed oceanic fish actually wind up outside the cages, where they impact wild communities. And then there are the genetically modified fish..that's another distressing story. The consumption of fish is not as simple as it once was! For a thorough review of these issues, check out The End of the Line: How Overfishing is Changing the World and What We Eat by Charles Clover, or The Empty Ocean by Richard Ellis.