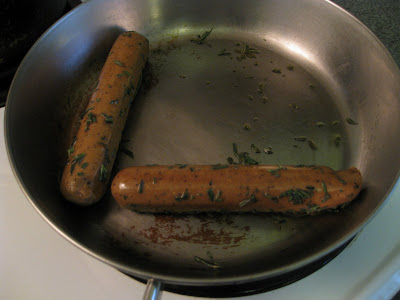 One of my very favorite vegan dinners, a very fast dinner, is centered around Tofurkey kielbasa "sausages." I eat meatless hotdogs sometimes, but really, they're kinda tasteless unless you use a buncha mustard. But these vegan kielbasa's are in a different league. We cook them in a little olive oil in a pan, with fresh rosemary from the garden sprinkled over them and cooked with them. The rosemary adds a little crunch and a lot of flavor. Diced garlic could serve the same function, if you don't have rosemary. Man, those keilbasas are good. We eat them most often cooked like this in a pan, with wild rice on the side and a salad.

But Ken slices them and uses them in soups too. This week he made a barley soup with diced turnips, sliced vegan kielbasas, diced green peppers and onions sauteed in advance, and one can of vegetable broth. I put tamari in my soup. It was too tasty. Too tasty, in that I wanted to eat too much of it. We ate rosemary-olive oil bread from Harris Teeter bakery with it. That is dadgum good too. We buy 4 loaves at a time and freeze it because they run out of it a lot.

I don't recommend specific prepackaged foods very often....but these Tofurkey kielbasas stand out, they warrant a plug. Especially for the family who might be wanting to cut back on meat consumption and is looking for new ideas. Harris Teeter carries these kielbasas in their produce section, with the meatless hotdogs and soy crumbles (a ground beef substitute). 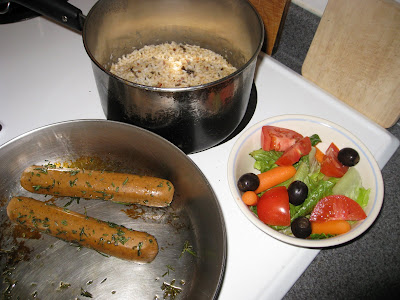 On my stove: vegan kielbasas in the pan, with wild rice, and a salad. 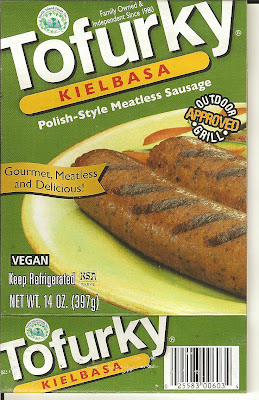 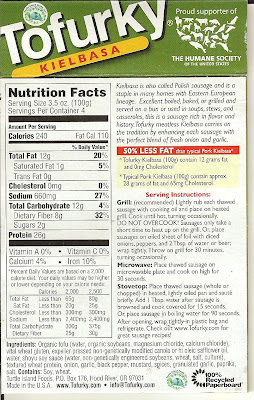 Sounds great thanks and I'm going to try this out. I've started to have less soy based meats but I'm excited for this one, thanks!

Just tries these for the first time and I am very impressed!I have been vegan for almost 5 yrs and rarely eat meat substitutes but these are yummy! Especially with a good microbrewed beer :)