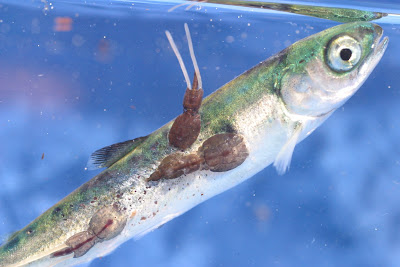 Wild young salmon burdened with fish-farm lice
Image credit: Alexandra Morton, Science News
Humans wolf down more than 9 million metric tons of farmed fish every year. Lots of consumers believe farmed fish are a more eco-friendly diet choice than wild fish, many of which are declining due to overharvesting and climate change. But a growing body of scientific studies suggest that fish farms, or aquaculture pens, are not friendly at all to aquatic environments or consumers. Fish in crowded pens, just like livestock in crowded pens, are prone to illness and parasites. Farmed fish are customarily doused with fungicides, parasite medicines, antibiotics, and dyes to render their flesh an appetizing color. All of these substances leak out into the surrounding waters.

One recent study, presented February 15 at the meeting of the American Association for the Advancement of Science, concluded that fish farms in the Pacific Northwest are dangerous to wild salmon. When inch-long young pink salmon and chum salmon swim down the area's coastal rivers toward the ocean, many pass fish farms or aquaculture pens in coastal inlets. These wild juveniles often pick up sea lice that are abundant in the crowded aquaculture pens and drift outside the pens.

The lice suck blood from the tiny fish, and the wounds are also an opening for harmful bacteria and viruses. According to Martin Krkošek of the University of Washington in Seattle, mortality to wild young salmon passing by lice-infested fish farms can be as high as 95 percent.

In addition to making the young fish sick, the parasite load also affects their predator-avoidance behaviors, so that the young salmon are more likely to be eaten by predatory birds and bigger fish. Experiments have shown that while healthy young salmon dart away from a bird diving into the water, the lice-laden youngsters take longer to seek shelter and are thus more vulnerable. The lice-burdened little salmon are also less likely to seek shelter inside a fish school, straggling along on the outside of the school instead, where they are quickly picked off by predatory fish.

Says Felipe Cabello of New York Medical College in Valhalla, who also presented at the conference, fish farms are the new frontier of excessive antibiotic use. Factory farms for livestock have long been criticized for feeding 70% of the United States' antibiotics to poultry, hogs, and cattle simply for weight gain, a practice that contributes to the growing immunity of bacteria to antibiotics. Fish farms are now exacerbating the problem.

Fish farming was once seen as a way to avoid overharvesting wild fish, and to feed the world’s growing population. But many scientists now say that farms should concentrate on shellfish and on fish that are low on the food chain. Farming carnivores such as salmon doesn't make sense, because more fish must be taken from oceans to feed the farmed salmon than is produced by the farms.

John Volpe of the University of Victoria in British Columbia, who also presented at the conference, is on a research team that’s trying to assess the sustainability of aquaculture. The Global Aquaculture Performance Index evaluates a country’s fish farms using several parameters, such as water quality and the amount of disease and parasites. The global production of farmed fish is growing, and most of the farmed fish are high in the food chain and need to be fed other fish. It's not sustainable, nor does it make sense. "It's farming the tigers of the sea," Volpe says.

For more information on fish farms, see our book Going Green and our previous post on the subject. Sally Kneidel, PhD

I used to buy farm-raised Salmon quite regularly until I learned about the parasitic problems associated with this technique. Now I refuse to. I always look for the sign that it's "wild-caught", or I don't purchase it.

Now it's moving into the wild population.

The human species is destroying our natural world, and only a small percentage are even aware.

Have you seen Food, Inc., yet?

These wild juveniles often pick up sea lice that are abundant in the crowded aquaculture pens and drift outside the pens.

I used to think that the only problem with farm raised salmon was the dye, but articles such as this one have opened my eyes to all the other factors related to fish farming.

We always thought fish farms were clean and safe. This is real good information. I am so glad I read about this. Thanks

until now I thought they are good for the fish in the sea. But I see your arguement. But I somehow doubt that they would go out and fish smaller fish to feed salmon. Would they not feed them with artificial food?

Thanks for leaving a comment "a i quotes". But it's a fact that farmed salmon ARE fed smaller fish. If you don't believe it, check out the Science News article by Rachel Ehrenberg that is listed as a source at the end of my post. Google the title of her article: "Lice-laced salmon are easy dinner."

This is truly a great read for me. I have bookmarked it and I am looking forward to reading new articles. Keep up the good work

You have some interesting thoughts! Perhaps we should contemplate about attempting this myself.

Thank you for another essential article. Where else could anyone get that kind of information in such a complete way of writing? I have a presentation incoming week, and I am on the lookout for such information.