Mama monkeys give in to tantrums...when others are watching 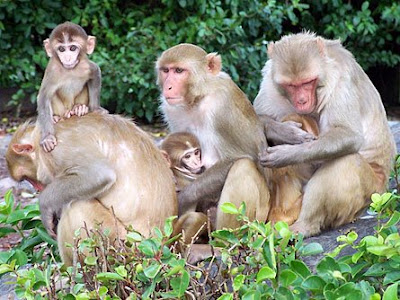 Photo by Stuart Semple
Female rhesus macaques and their babies cluster amiably, but an infant tantrum can disrupt the scene
Have you ever been in a public place when your toddler throws a tantrum? I have and it's pretty embarrassing. Not because of the crying, per se, but because onlookers may glare. In fact, I admit to occasionally looking with disapproval myself at other parents who ignore their babies' loud distress. It's distressing to me to listen to it.

Does the presence of disapproving onlookers have any effect on how human moms react to tantrums? You bet.

Turns out the same dynamic goes on in troops of monkeys.

Behavioral scientist Stuart Semple & his colleagues studied monkey tantrums and bystander reactions by watching rhesus macaques that roam freely on the island of Cayo Santiago, Puerto Rico. Baby monkeys wanting to be nursed when mom wasn’t willing often started shrieking. For more than 300 outbursts of baby crying, the scientists noted which other monkeys, if any, were within two meters. The team also noted how mom, baby and the bystanders interacted.

The researchers found that the monkey mothers are twice as likely to let a howling infant have its way during very public tantrums than during more private moments, says Stuart Semple of Roehampton University in London.

Not a bad decision on mom’s part. A baby rhesus monkey makes a high-pitched, grating shriek that Semple calls “pretty harsh stuff.” Onlookers get restless and irritable; in fact, a mom and unhappy baby are 30 times more likely to suffer aggression from a bystander during a crying bout than they would in quiet times. Onlookers within two meters made threatening gestures, or even chased, grabbed or bit the mother or the infant.

Most of the aggression came from monkeys that weren't close relatives and outranked mom in the social hierarchy. Her relatives proved more tolerant.

When moms and babies weren’t close to other monkeys, rebuffed babies that started shrieking were allowed to nurse 39 percent of the time, the researchers found. With just relatives nearby, the babies’ luck rose to 53 percent. But with unrelated onlookers that outranked mom in the dominance hierarchy, babies won the tantrum 81 percent of the time. 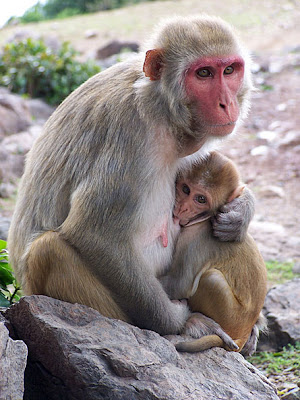 Photo by Stuart Semple
If baby cries when they're alone, the tantrum has only a 39% chance of changing mom's mind.

Mom herself gets agitated by the baby’s crying. Analyzing records of mothers' behavior, the researchers calculated that a female on average was 400 times more likely to get aggressive toward her baby when it was crying than when it wasn't. Wow! That surprised me! Must be lots of adult monkeys out there with unresolved "issues" with mom! I tend to think of non-human mammals as always being kind and attentive to their young. But I guess not...

Studies of communication often focus on just two parties, the one sending the message and the intended receiver, Semple says. But the real world is full of other eyes and ears, ones that senders and receivers often react to. “We need to start thinking about communication in more realistic terms,” he says.

Research has found that nonhuman primates pay attention to eavesdropping bystanders, “but this is the first demonstration that communication between mother and infant is affected by an audience,” says behavioral biologist Dario Maestripieri of the University of Chicago.

Other baby primates besides humans and macaques throw tantrums, says behavioral biologist Liesbeth Sterck of Utrecht University in the Netherlands. The Thomas langurs she watches certainly do. However, she points out that langurs do more "allomothering," caring for infants other than their own, than rhesus macaques do. That behavior may affect the dynamics in this and other species, she says.

Links to some of my previous posts on this blog about monkeys and chimps:
(to find others, enter "primates" in the search bar above)

Monkeys and parrots pouring in from the jungle

Almonds or pizza? Capuchins are smarter than we thought

Monkeys can estimate numbers as well as Duke students

Chimps and gibbons have human elements to their speech

Wildlife trade, forestry, and the value of activism