Female hyenas, all hermaphrodites, bully the male hyenas and take prey from lions 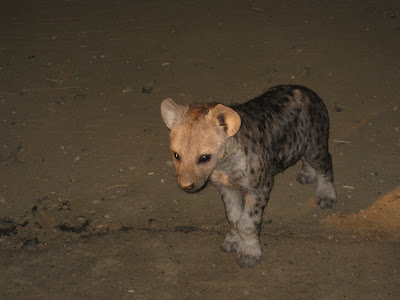 A baby spotted hyena in Shingwedze, Kruger National Park (photo by Sally Kneidel)
We were lucky to see some wildlife on our recent trip to South Africa - although our success was more than luck. We spent a lot of time looking. We were particularly attracted to the big predators, lions and leopards - which I'll write about later. 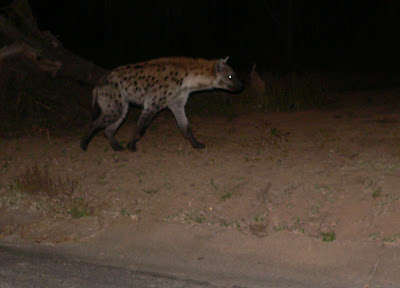 An adult spotted hyena along the road in Skukusa, Kruger National Park, South Africa (photo by Sally Kneidel)
But the most interesting and underrated carnivores we saw may have been the spotted hyenas. We saw them trotting along the road we traveled every evening, heard them yelping while we slept, and sort of took them for granted. We shouldn't have. I was surprised to read on our return that spotted hyenas are the second-biggest and most formidable carnivore (after lions, presumably) in Africa; a single hyena is capable of running down and killing unaided a bull wildebeest 3 times its own weight!

Wow! Spotted hyenas are powerful and they look powerful. They're easy to recognize, with the shoulders higher than the hindquarters, the massive skulls, dog-like faces, and spotted coats.

But here's what really got my attention about hyenas. We were on a "night game drive" at one of the camps in Kruger National Park, and we came upon a communal den of hyenas out in the bush. 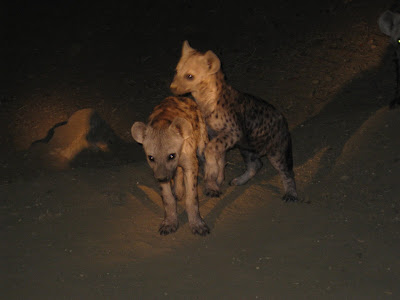 A communal den of spotted hyena cubs we came upon on a night drive in Kruger National Park, South Africa (photo by Sally Kneidel)
Our guide told us a little bit about the social system of hyenas that I didn't know. Their social /mating system is just plain weird! Female embryos are exposed to a lot of testosterone during development, which makes them more aggressive (as adults) than females of other mammal species, and also affects their reproductive system. Here's the weirdness: because of all the testosterone in utero, the female has male reproductive organs, which don't function. Her vagina is blocked by a false scrotum and testes. She has a phallus but it doesn't function as one. Mating occurs through the female's phallus, which is slack, the prepuce a wrinkled ring around her enlarged urethra. During mating, the male enters the female through that ring. Don't ask me how sperm gets from her urethra to her uterus and oviducts: I don't know. But the previous explanation is supported by a written source, Richard Estes' excellent book The Safari Companion.

I also read, and heard, that the male is fearful of the female during mating, because of female dominance. Even juvenile females can and do bully adult males.

Hyena cubs are raised in communal dens, and adult males play no role in their upbringing. The cubs are fed and guarded only by their own mothers. At the communal den we saw, the cubs were of varying ages. They were not siblings, just den mates or clan mates. Dominant adult females are usually recognized as the biggest, fattest hyenas with swollen udders. 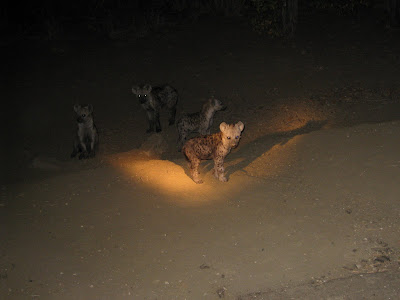 Females not only dominate males at kills but also lead clan members on pack hunts, boundary patrols, and into battles. Hyenas and lions are very competitive and try to take each other's kills. Hyenas in groups often succeed in chasing off female or juvenile lions, but not mature male lions. With all other predators, hyenas are very likely to win a fight over a carcass.

So. Those hyena cubs were pretty cute, looking very much like puppies. But the adults...whoa. I know now why our host at Skukusa told us not to take walks at night along the roads where we saw the adult hyenas.

What's the conservation status of spotted hyenas? They are not immediately threatened or endangered, but their survival depends upon the availability of prey. As human expansion continues to demand more space, and climate change alters habitat, there will inevitably be less space left for prey. The long-range consequences of human population growth and climate change will be a reduction in the numbers of almost all wildlife. What can you do? Reduce, reuse, recycle. Pay attention to your ecological footprint. Support organizations that work to protect habitat, such as Conservation International, the Nature Conservancy, and World Wildlife Fund.

Hyenas are such wonderful creatures. I can't understand, that so many people hate them.

For the record, hyenas are NOT hermaphrodites. There are males and there are females; there are none that have reproductive organs of both. The females are somewhat masculinized by an abundance of the male hormone androstenedione in the early stages of development, but they are INDEED 100% female. They bully each other equally but are a matriarchal society which is rare amongst mammals. The females outrank the males. They also hunt and kill their own prey more often than scavenging, stealing, and eating carrion as people think. Hyenas are capable of attacking a herd and chasing their prey (a springbok for example) at an average speed of 60 mph for miles. They are truly amazing animals, and they are indeed misunderstood.