We were lucky to see lions on a kill. But are lions disappearing from Africa? 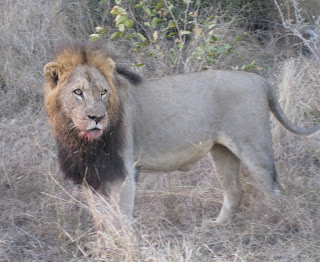 A lion we spotted on a kill in South Africa. Note the blood on his lower jaw.
If you go on a "game drive" in Africa, looking for wildlife with cameras & binoculars, the guide always starts off by asking, "What do you all want to see?". The answer from everyone in the jeep is always the same...."lions, leopards, cheetahs". People are fascinated with the big cats. Even though hyenas are the second most powerful carnivore on the continent, I never once heard anyone asking for hyenas. It was always the cats.

Unfortunately, cats are among the hardest of the big animals to find, even in reserves and parks like South Africa's Kruger National Park.

We were lucky this past June to come across a couple of adult male lions on the carcass of a big Cape Buffalo, just outside of Kruger in a protected area that's part of "Greater Kruger." The carcass was only 10 feet from the sandy road we were driving down. We couldn't get a clear shot of the carcass because of the bushes and grasses in the way. But we waited and we did get clear shots of the lions when they got up to stretch and sleep. 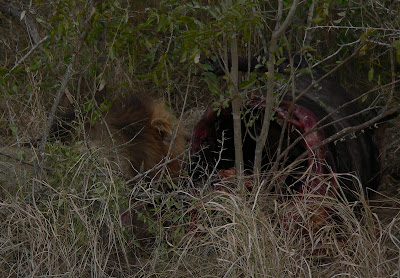 One of the lions (left) pulling meat from what's left of the Cape Buffalo carcass. You can see the open body cavity on the right, and the buffalo's gray skin still covering the rib cage.

Presently one of the lions got up to relieve himself in the grass (below). 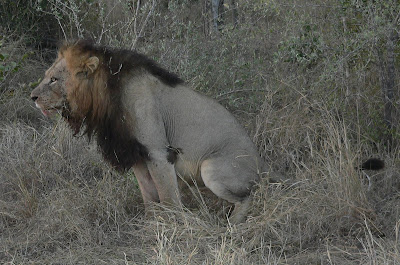 Then the second lion got up, and ambled over to the soft sandy road to sleep. He was so stuffed and so sleepy that he almost stumbled as though he were drunk. Note the blood on his front legs and face (two photos below). 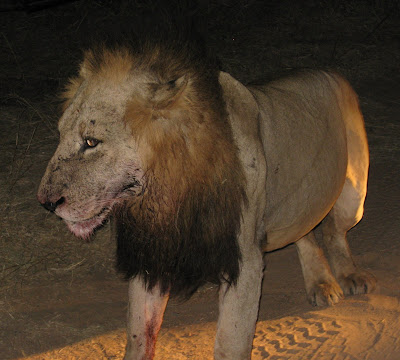 All photos and text by Sally Kneidel, PhD 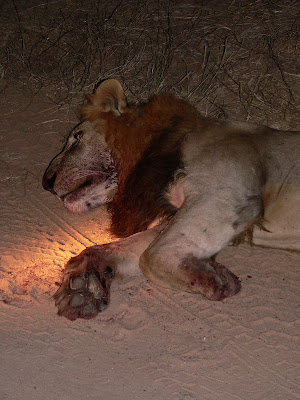 We came across the same lions at the same spot the next day (below). Again, one of them was napping in the road, too full and sleepy to even get up to urinate. Instead he urinated where he lay (as we watched) and the urine pooled around his rear end.

Although we were lucky to see these lions that stayed on the kill for several days, we didn't see many other lions, even though we looked for about a month inside Kruger Park and in reserves abutting Kruger. I had expected cheetahs and leopards to be rare, but I was surprised at the scarcity of lions. I shouldn't have been surprised. Africa's lion population is sharply declining, I'm now learning. The number of free-roaming African lions has dropped from 50,000 just 10 years ago to somewhere between 10,000 and 23,000 today. That's a decline of more than 50% in just a decade! And, according to Jeff Corwin, there were 250,000 lions in Africa only 25 years ago! Some scientists, such as Dr. Laurence Frank of UC Berkeley, believe the African lion is on the road to extinction.

It's mostly about conflict with humans. As human populations in sub-Saharan Africa expand, the land left for prey populations decreases. A single pride of lions requires a hunting territory of 8 - 154 sq miles (20-400 sq km), depending on the density of prey animals. Lions generally eat the commonest hoofed animals nearby - impala, wildebeest, zebra - all grazers that need a lot of grazing space. Loss of habitat due to human population growth and human activities is the primary cause of the decrease in lion numbers in Africa. Jeff Corwin says that lions have lost 80% of their habitat in the last century.

But loss of habitat is not the only cause; other factors play a role in their decline. As the human population increases, so does the number of livestock. In Kenya and Tanzania, the Maasai people graze their cattle on the same lands where lions roam, or have roamed. Cattle are equivalent to wealth and status for the Maasai. When prey is not plentiful, some lions will kill livestock. Traditionally Maasai have eliminated such lions by hunting them with spears. Nowadays though, the lions can be eliminated much more easily by poisoning carcasses with a cheap and common crop pesticide, Furadan, and then leaving the poisoned carcasses out for lions to take. (Lions are scavengers as well as predators.) In March of 2009, the TV news program "60 Minutes" ran a story on the American chemical Furadan: "Poison Takes Toll on Africa's Lions." With hidden cameras, reporters documented that Furadan was commonly available in Kenyan shops that were miles from any cropland, where shopkeepers chuckled when asked what the Furadan was for. After the story aired on national TV in the U.S., the American manufacturer promised to stop all sales of Furadan in Kenya, Uganda, and Tanzania. In a July 25 update online, the 60 Minutes staff report that Furadan has been pulled from the shelves in Kenya, but not in neighboring Tanzania or Uganda.

Disease is also a serious problem for lions. We were told by several wildlife guides and scientists in Kruger that lions in South Africa are suffering from tuberculosis contracted from cattle. We were told that TB doesn't kill them immediately, but weakens them and shortens their life span. In addition, according to The Lion Foundation, 90% of free-roaming lions in Botswana are infected with FIV, the feline equivalent of HIV. And the lions of the Serengeti decreased around 30% after a 1997 outbreak of canine distemper. 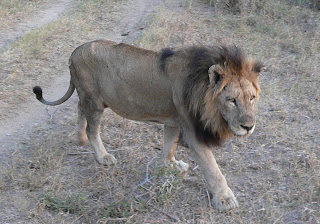 A thin, weak lion we saw in 2007. We watched him try to climb a tree, but he was unable to. At the time I thought he was old. But now I wonder, did he have TB?
Trophy hunting or so-called "canned hunting" also takes its toll on African lion populations. Private ranches are often stocked with game animals just to provide easy shooting for those who like to kill big animals. By some reports, as many as 1500 lions are shot annually in southern Africa for trophies. Most desired are black-maned male lions in their prime reproductive years. But according to The Lion Foundation, approximately 6-8 other lions die each time such a male is shot. That's because another male will take his place in the pride, and when that happens, the newcomer generally kills all the cubs in the pride, which makes the females come into estrus sooner than they would otherwise. Occasionally adult females are even killed trying to protect their cubs. It's an adaptive strategy for a newly dominant male to kill the cubs of his predecessor, because it increases the likelihood of propagating his own genes, which is what natural selection is all about. But it wreaks havoc in a system when prime males are plucked out over and over by trophy hunters.

What's the problem?? How'd we get here?
The problem ultimately is poverty, and an uneven distribution of wealth and resources in the world. Poverty means...
What's the solution?
Practical short-term solutions include reimbursing herders or livestock owners for animals that are lost to predation, which is now happening in some places. Other solutions include recruiting Maasai and others in agrarian or herding communities into clubs or groups such as the Lion Guardians of Kenya, who stand guard and alert their neighbors when predators are nearby.

Ultimately the broader solution is support and assistance for the families and communities of Africa. That means sustainable employment that gives local people an incentive to preserve their natural resources, including lions. We need to empower women with education and jobs; when women are empowered, they choose to have smaller families, which leads to higher incomes and more opportunities for their children. People with choices and opportunities don't have to poison lions or sell lions to shooting ranches.

One thing we can do is to support organizations that are working on solutions - organizations such as the Nature Conservancy, Conservation International, the World Wildlife Fund. If you know others, write a comment after this post and tell me.

Another thing we can do is this: when we travel, we can make sure that our travel dollars go to local people, not international chains that will funnel the money to stockholders in other countries. It's not that hard to do. Americans spend 12 billion dollars a year in Africa. Let's put it in the hands of the local people.

All text and photos by Sally Kneidel, PhD

This post now appears on The Courier News online, a member of the Chicago Sun-Times News Group and on www.basilandspice.com, the #1 Syndicated Site for Authors and Book Views. This post is also now linked to Google News (a time-senstive link.)
Sources:
Enkosini Wildlife Sanctuary/The Lion Foundation