Chickens get a pretty bum rap as the dumbest of animals. Maybe that's why few people have much sympathy for the plight of chickens in our food industry. Take, for example, the hatcheries that produce the hens that lay our table eggs. Male chicks from these hatcheries are superfluous, since table eggs are infertile. The egg industry needs females only, for the most part. So male chicks are tossed, alive, into dumpsters. Take a look at the film Peaceable Kingdom by Tribe of Heart for clear footage of this interesting phenomenon. Or the photos in Animal Factories by Jim Mason and Peter Singer. 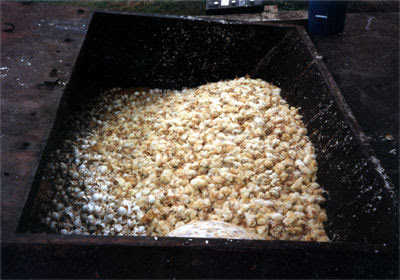 Live male chicks in a dumpster. Photo courtesy of www.tomregan-animalrights.com

Anyway - this post is good news about chicks! Interesting news. I read in Science News that chicks only 3 or 4 days old show evidence of adding and subtracting. Italian scientist Rosa Rugani and her colleagues from the University of Trento Center for Mind/Brain Sciences designed experiments that involved adding and removing objects from little piles hidden behind screens. She reports in the Proceedings of the Royal Society B that the chicks did a pretty good job of keeping track of the objects, equivalent to problems such as 4 - 2 = 2 and 1 + 2 = 3.

Rugani says this is the first demonstration of adding and subtracting in young animals other than humans. Other animals, such as dogs and chimps, have demonstrated mathematical talents as adults. Karen Wynn, of Yale University, says that Rugani's work is "compelling evidence that numerical understanding comprises a built-in system of unlearned knowledge."

So why would chicks need to know how to count? Chicks hang out in groups. As youngsters, they'll even hang out with little plastic balls about the same size as a chick. In the experiment, each chick watched as an experimenter hid balls behind two screens, then moved some of the balls from one screen to the other. When the ball-moving was over, each chick was allowed to wander. Around 75% of the time, the chicks scampered over to the screen that wound up with the most balls - indicating that they'd been keeping track of the adding and subtracting. 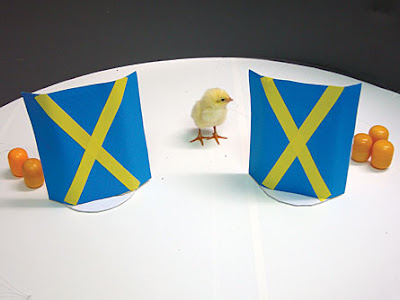 Photo courtesy of Science News and Rosa Rugani et al.
I have serious reservations about animal experiments in general. But behavioral experiments such as these, that demonstrate animal intelligence, are valuable. I can't help but hope that some day more people will "get it." Animals, especially vertebrates, are sentient beings that deserve a lot more consideration than we give them.