Babies cry in their native language....learned in the womb 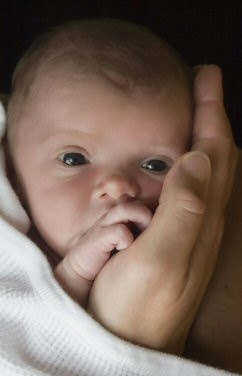 This post now a Google News Link and on Behavioral Health Central and on www.basilandspice.com.

Ever wonder if babies are listening and learning while they're in the womb?  Turns out they are, say researchers from the University of Wurzburg in Germany. Their observations were published online in the November issue of Current Biology.

The research team recorded more than a thousand cries from 30 French newborns and 30 German newborns. They then analyzed the melodic patterns of the cries to look for differences between the two groups. The researchers wondered if the cries had any resemblance to the speech patterns of the infants' mothers.

The newborns in the study, who were only 2-5 days old, cried in a melodic pattern that resembled their parents' language.  The French babies' cries tended to have a rising melody as does the French language.  The German infants' cries tended to have a falling melody like the German tongue. Because the infants were so young, the researchers inferred that they had learned the melodic patterns in the womb.

Scientists already knew that, in the final months of gestation, fetuses can hear people talking, especially their mothers. Previous studies have reported that newborns prefer the sound of their mothers’ voices to the voices of other people. Wermke, a member of the University of Wurzburg research team, believes that babies try to imitate their mothers’ behaviors and to mimic the musical structure of their mothers' words in order to attract her attention and foster bonding.  Earlier research by Fernald and Simon (see "Sources" below) has shown that infants even perceive the emotional content of their mothers' speech conveyed by intonation.

The first visible effort of infants to imitate the mother is the crying, with its falling or rising intonations. Later, the tendency to imitate vocalization is incorporated into babbling, Wermke proposes. From age 3 months on, infants begin to reproduce the vowel sounds they hear from adults.

What does this mean for parents of newborns?  Crying is not only a signal of distress, it's also a baby's effort to imitate mom in order to encourage attachment. Wermke says that parents should listen more carefully and appreciate the complexity of their babies' cries. "Crying is a language itself," she says, "and the baby is really trying to communicate with us by its first sounds already."

Neil Greenfieldboyce. "Babies may pick up language cues in womb." National Public Radio. 11/6/2009
Posted by Sally Kneidel, PhD at 10:30 AM