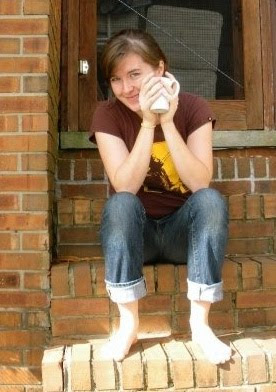 Remember that old song "If You Wanna Be Happy" by Jimmy Soul?
The first verse goes like this:
Turns out that song is all wrong.  It should be the other way around! Or so says psychologist James McNulty, writing in the Journal of Family Psychology.  My daughter emailed me a link to his article, finding it amusing. I printed it (on scratch paper!) and laid it beside my computer. Within 5 minutes my husband strolled into my office (he works at the same place), picked up the article and looked it over, then bolted into the coffee room next to my office waving the paper and announcing to all "So this is what she really thinks of me!!"  He was joking of course. He's always funny. Now that would be a good topic for a study - how women rate humor in a spouse.  I bet it's off the charts.

Anyway, the article my daughter emailed me was really interesting, and it was research-based, unlike the song! Dr. McNulty involved 82 couples in his study, taping each couple for 10 minutes as they discussed a personal problem such as job-seeking, healthier eating, or frequency of exercise. Later each tape was rated for how supportive each spouse was of the partner's issues.

"A negative husband would've said, 'This is your problem, you deal with it,'" McNulty said, "versus 'Hey, I'm here for you, what do you want me to do?, how can I help you?'"

Then he looked for any correlations between supportive comments and attractiveness ratings. Here's what he found:  overall, both husbands and wives were more supportive when the wife was more attractive than her husband!

Said McNulty, "The husband who's less physically attractive than his wife is getting something more than maybe he can expect to get.  He's getting something better than he's providing at that level.  So he's going to work hard to maintain that relationship."

On the flip side, a man who is more attractive than his wife might have a "grass is greener" attitude, always aware that he could have access to women better looking than his wife.

McNulty suggested that women are more interested in a supportive spouse than in his looks. And their behavior mirrors their husbands'.  If a man is supportive, his wife is too.

In addition, McNulty and his colleagues questioned the couples on their degree of marital satisfaction.  The only association between "marital satisfaction" and attractiveness was that more attractive husbands were less satisfied.  Again, this may be a function of a handsome man's "grass is greener" perspective.

I have to say, at least part of this rings true for me.  I think women do value support and encouragement from a spouse more than they value his looks. I can't say how much men value support from a spouse.  In my experience, they appreciate it and perhaps need it, but don't actively seek it as often as women do.

What do you think?

That is really interesting, and I'd have to say I probably would have agreed if someone were to ask me.

All the fat, ugly girls I know have HOT husbands. The husbands are in no rush to divorce them. That's because fat ugly women are great at cooking and cleaning and sex! Whereas a "hot girl" like me has a "grass is greener" attitude, and we're out searching for a hotter guy!