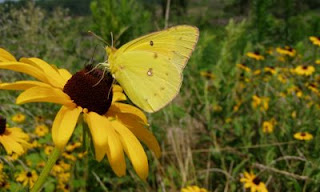 Orange-sulphur butterfly, photo by Alan Kneidel
This post now appearing on the DailyMe
Those of us concerned about greenhouse gases and climate change have a new study to ponder. This study, from Dr. Florian Altermatt at UC Davis, documents once again the biological effects of global warming.

Altermatt examined insect data from Central Europe. Temperatures have been increasing there for decades, but particularly since 1980. This European warming trend is increasing the number of generations per year for some insects.

Altermatt discovered this by analyzing climate records and population data for 263 butterfly and moth species in Central Europe. He included only species that are known to have more than one generation per year, at least occasionally.

He found that, for 190 of the 263 species examined (=72%), the second or subsequent generation became more pronounced after 1980 compared with before 1980.  In other words, for most of the species he examined, there were more generations per year after 1980.

So what?
What difference does that make to the ecology of our planet?  There are a number of potential repercussions, few of them good.

For one thing, many crop pests are larvae of moths or butterflies, such as the cabbage white and the tomato hornworm - to name just a couple from my own garden.  A population that is having more generations per year will grow in number faster than a population with fewer generations per year, all other things being equal. So global warming could mean faster-proliferating insect pests, hence higher numbers of insect pests on crops.

In addition to that, higher numbers of a particular insect species can lead that species to deplete its food source, or outcompete and eliminate its competitors for limited resources such as food or breeding sites.

Ecosystems can be altered if just one species goes awry
Another potential result of an overblown insect population could be increases in the predators of this insect species. Predators of butterflies, moths, and their larvae include birds, lizards, mice, toads, parasitic wasps, and many more. If these predator populations increase, this could have a dampening effect on the other prey of these predators, prey that could have economic value - or could be significant species in their respective ecosystems.  As ecologists have demonstrated repeatedly, eliminating any species from an ecosystem, or even just changing the density of one species, can have profound effects on the stability of the ecosystem as a whole.  Ecosystems are highly complex systems whose parts are intricately interdependent.

The principle that Altermatt demonstrated is far more significant than the particulars he reported.  Specifically, he showed that 72% of the moths and butterflies he looked at in Central Europe have more generations per year now that the climate is warmer.  But his data suggest something far more sinister....that any or all terrestrial invertebrates may have their breeding disrupted in some fashion by climate change.

Are negative consequences inevitable?
We don't really know. Animals that have more generations can adapt faster to changing conditions. Or maybe more insects could mean more prey for birds that are declining.  It's conceivable that there could be benefits to having insects breed faster.  Is that the most likely outcome?  I don't know.  But I don't think so.  The few stable ecosystems we have remaining are the result of millions of years of co-evolution.  It's hard to think that a few years of random interference is going to improve millions of years of fine-tuning.

What can be done?
Reduce your own carbon footprint.  Residents of the United States generate more greenhouse gases per person than residents of any other country in the world.

The easiest thing you can do, every day,  is to eat fewer animal products (see "Livestock and Climate Change" by Worldwatch Institute).  The Worldwatch Institute, a prominent environmental think-tank, reports that the livestock sector generates 51% of greenhouse gases worldwide.

Find ways to drive less. Carpool, ride your bike, take public transportation.  If you do drive, use a fuel-efficient car.

Choose a passive-solar home, which can reduce your heating and cooling needs to almost nothing.

The Union of Concerned Scientists has reported that our diets, our transportation, and the way we heat and cool our homes are the biggest consumer contributions to greenhouse gas emissions and pollution in general.

Take the Environmental Footprint quiz and learn more about how to reduce your own carbon footprint.

We have only a short window of opportunity over the next few years to have any hope of slowing global climate change.  Once the ice sheets are all melted, the loss of all that white ice reflecting solar radiation away from the planet will accelerate the process of global warming.

For more practical suggestions about how to reduce your carbon footprint, see our book Going Green: A Wise Consumer's Guide to a Shrinking Planet. The book offers strategies regarding diet, housing, transportation, clothing, and other consumer choices that we all make every day.

Tree deaths have doubled due to climate change

Copenhagen data: 10% of Florida underwater by the end of the century

One-tenth of Louisiana to be submerged by 2010

Green tip #1: Annex the outdoors and save energy and materials

How to buy a used, fuel-efficient, and green car