This post now on Google News and on wwwbasilandspice.com 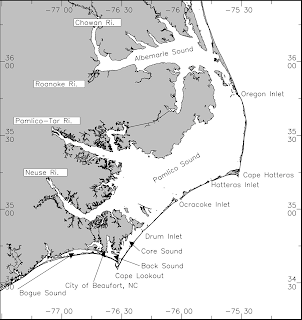 I've written posts about Florida and Louisana losing ground to rising seas. Both states are projected to lose at least 10% of their land mass this century.

North Carolina hasn't gotten has much press as Louisiana and Florida, but NC is among the states most vulnerable to rising seas, reports the National Oceanic and Atmospheric Association. Coastal inundation in North Carolina would affect industries and wildlife far beyond the state's borders.

The Outer Banks protect the mainland
North Carolina's mainland coast is at present protected by a continuous arc of barrier islands known as the Outer Banks. The Outer Banks take the full brunt of the hurricanes and tropical storms that often strike the Atlantic coast of the southern U.S. Over the past few decades, the Outer Banks have become increasingly developed with expensive vacation real estate as well as year-round communities.

One undeveloped area on the Outer Banks is the Cape Hatteras National Seashore, which remains a breeding ground for sea turtles and for thousands of shore birds, including endangered species such as the Piping Plover.

The people and the wildlife of the Outer Banks are extremely vulnerable to rising seas.

NC seas could rise 4.6 feet, says panel on January 16
A panel of scientists and engineers reported on January 15, 2010, that the sea level on the NC coast may rise as much as 4.6 feet this century. Even a rise of 3 feet, they report, would wipe out the Outer Banks. If or when that happens, the repercussions will be far flung.


Rising seas likely to wipe out vital breeding grounds
Between the Outer Banks and North Carolina's mainland are brackish wetlands and the calm waters of the Pamlico Sound, an area of fewer predators than the open ocean. The Pamlico Sound serves as a nursery for much of the young sea life of the entire East Coast. But if the Banks are submerged, the Sound and 2300 square miles of low-lying marshland will be flooded with saltier sea water, which will destroy the brackish ecosystem, as well as the fishes that are adapted to the less salty water of the Pamlico Sound as youngsters.

This is not just a nightmare for naturalists and ecologists. The commercial fishing industry would also be devastated by the loss of this important breeding ground.

Although scientists cannot predict with certainty how much sea levels will rise this century, estimates by climate scientists are leaning toward higher numbers. Ice sheets in Greenland are are shifting faster than expected, and indications of unstable ice are appearing in Antarctica, reports Gordon Hamilton of the University of Maine. Writes Bruce Henderson of the Charlotte Observer, "Ice sheets in Greenland alone could raise global seas some 20 feet."  This is a generally accepted approximate figure. The question is, how long will it take?  And will we be able to stop or slow the process?

What can you do?
We can work to slow the process by reducing our own greenhouse gas emissions. As residents of the United States, we have the highest per capita generation of GG in the world. We can reduce our output by
eating fewer animal products (see "Livestock and Climate Change" by Worldwatch Institute), by driving less, carpooling, driving fuel-efficient cars, choosing passive-solar homes, and in general burning fewer fossil fuels. Take the Environmental Footprint quiz and learn more how to reduce your own carbon footprint. We all have to participate, if we are to reduce global climate change during the short window of opportunity we have over the next few years.

For more practical suggestions about how to reduce your carbon footprint, see our book Going Green: A Wise Consumer's Guide to a Shrinking Planet. The book offers strategies regarding diet, housing, transportation, clothing, and other consumer choices that we all make every day.

Some of my recent posts about climate change:

Tree deaths have doubled due to climate change

Copenhagen data: 10% of Florida underwater by the end of the century

One-tenth of Louisiana to be submerged by 2010

Green tip #1: Annex the outdoors and save energy and materials

How to buy a used, fuel-efficient, and green car