My review of the documentary "Dirt! The Movie"

This post is now on Google News and the syndicated BasilandSpice 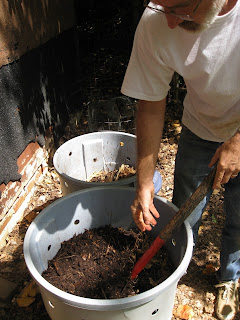 Garden soil, composted from vegetable and yard waste. Photo by Sally Kneidel
I was asked to write a review of "Dirt! The Movie," a documentary about our worldwide destruction of soil versus our absolute dependence on soil for our survival. The movie is an inspiring blend of interviews with scientists, farmers, and activists, as well as footage from around the world of the traditional uses and modern abuses of soil.

The first third of the movie explores the origins and contents of healthy soil, followed by testimonials from an impressive array of experts about the value and utility of soil. The filmmakers interviewed workers building with soil; one-third of the world still lives in earthen homes. Winemakers talked about the relationship between soil and subtleties of taste. Biologists dug up worms and fungi with their hands; they and others spoke passionately about the vast array of organisms essential to soil health.

A scary diagnosis
The next third of the film documented how humans are destroying the limited amount of soil we have. Little of this was new to me, yet I felt compelled to write down almost every word of it. The vivid images and words were motivating to me in the way a scary medical diagnosis can be motivating; I wanted to remember everything. To make their point about soil destruction, the filmmakers covered mountaintop removal for mining, agribusiness methods that erode soils and poison ecosystems, desertification that starves African and Indian families, and deforestation of the Amazon "for expansion of soil."  Said biologist Janine Benyus, "We've lost 1/3 of our topsoil in the last 100 years."

Benyus and other scientists denounced the agribiz practice of planting monocultures, which are more vulnerable to weather extremes and pests, leading to the use of pesticides that destroy vital soil organisms. Unhealthy soils lead to the widespread use of nitrogen fertilizer, most of which winds up in surface waters downhill from crop fields. Nitrogen pollution is responsible for the infamous dead zone in the Gulf of Mexico, where little survives but jellyfish. Nitrogen fertilizer also forms nitrous oxides that contribute to global warming. Remarked Vandana Shiva, a physicist, farmer, and activist in India, "25% of greenhouse gas emissions are coming from agriculture that has become a war against soil."

Majora Carter is featured
The last third or so of the film was devoted to solutions, spotlighting individuals who are engaged in projects to nurture soil or to help underserved populations connect with gardening. The most impressive of those to me was Majora Carter, founder of Sustainable South Bronx, who extolled the virtues of roof gardens. I gathered that the filmmaker's objective in this portion of the film was to illustrate what each of us might do as individuals, to encourage viewers to take action, however small.

While I agree that "a journey of a thousand miles begins with one step," we don't have time to piddle around.  As Wes Jackson of "The Land Institute" pointed out in the movie, "we have a hundred year window in which to find ourselves. We have come to the end of the extraction economy and we have got to figure out how to live within our means."  Jackson is being generous. We have maybe 20 years to turn things around, before reaching the point of no return environmentally. With that in mind, I would've liked to see the film focus on bigger solutions, like pressing the governments of Brazil and Southeast Asia to protect their remaining trees.  Or suggesting ways to address desertification in Africa.. As the richest country in the world, we are not powerless.

Why is the impact of livestock omitted?
In spite of the movie's merits, I was disappointed that it never mentioned the livestock sector as a major cause of soil loss worldwide. The desertification in Africa is a direct result of overgrazing of livestock. When hoofed animals graze land with too few plants to sustain them, they pull up plants by the roots. They also compact the soil with their hoofs, which keeps rain from permeating the soil.  The result is rootless, dry soil that blows away in the wind - that's desertification.  Nor did the film mention that Brazilian rainforests are cut primarily to raise feed for livestock or to graze livestock.  If we ate plant-based foods only and skipped the livestock, we'd need only a small fraction of the agricultural land we need to support livestock. In which case, forests could be spared. Is that not relevant to soil conservation? What's more relevant than that?

I was also surprised that, during the discussion of seed diversity and the importance of saving and exchanging seeds with other farmers, no mention was made of corporations such as Monsanto that are acquiring ownership and controlling the use of our crop seeds, and genetically altering many of them. (For more about Monsanto, see the Center for Food Safety website or their publication "Monsanto vs. U.S. Farmers".)

Valuable for educators
But overall "Dirt! The Movie" is a film with a crucial message, and well worth watching.It's an excellent movie for a teacher or professor to use for any age student, as an introduction to an ecology unit, or to open any variety of topics involving life on the planet. It's not a gripping documentary, like "Darwin's Nightmare." But valuable.If everyone on the planet were aware of the issues covered in this film, we might stand a chance of actually turning things around before we exhaust our planet's resources...none of which are more necessary than dirt.