I recently wrote a post about Indonesia's illegal trade in wildlife, focusing on orangutans. As one of our closest relatives, orangutans act and look a lot like humans, especially the babies. People world-over seem to share a fascination for the red-haired apes; they're featured in movies, commercials, and as "poster children" for conservation organizations. Unfortunately, their high visibility has done little to protect orangutans from impending extinction. In fact, their human-like antics contribute to their demise by making them extremely popular as pets - one of the major threats to their survival.

While orangutans are as widely available as ever for pet-seekers, dealers no longer display them openly in the marketplace. With all the media attention on the apes' endangered and protected status, dealers and police as well find it difficult to pretend that orangutan sales are legit. Orangs are more likely now to be sold in the same clandestine ways drugs are sold - at prearranged meetings, or in homes or other private locations. 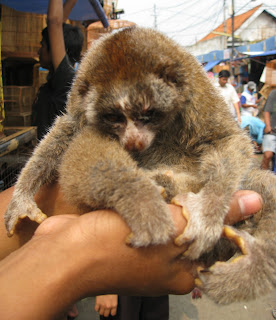 What about the less celebrated primates of Southeast Asia?
Southeast Asia has 70 species of primates, with 39 species in Indonesia alone. That's an astonishing number; in my experience, it's unrivaled by anywhere else in the world. During my recent visits to three wildlife markets in Jakarta (Indonesia's capital), I saw plenty of primates openly exhibited for sale, although there were many more species for sale that I didn't see.

"The shy one"
At all three Jakarta markets, I saw the greater slow loris for sale, an internationally protected primate  species that's listed in CITES Appendix I and on the IUCN Red List of Threatened Species. The greater slow loris is totally protected by Indonesian legislation as well. Yet these animals were paraded brazenly, were even hawked aggressively to me and my companion as highly desirable and cuddly purchases. They were called "kuskus" by the dealers, “kukang” or “malu-malu” (the shy one) by local people outside the markets.  A consultant for TRAFFIC told me about seeing lorises in markets dyed black and dressed  in clown outfits – selling for higher prices. Mortality is high in pet lorises, from infections after having their teeth pulled out with pliers, and from stress and inappropriate food. But lorises are relatively inexpensive and considered easily replaceable in Indonesia. Which means their capture rate must be quite high to maintain a steady flow into the markets. 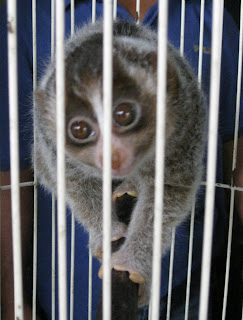 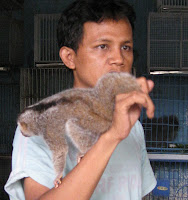 I saw dozens of long-tailed macaques for sale in all the markets. Many looked so young as to be barely weaned. They all seemed bedraggled and frightened. Many appeared hungry and sick. One was dyed orange to look like a more expensive baby silvered-leaf monkey. 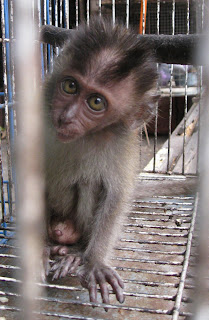 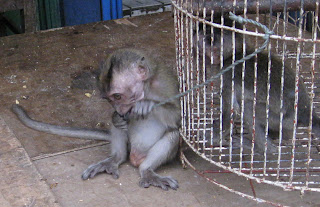 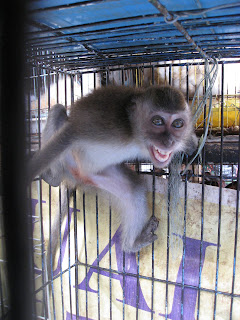 I kick myself for not stopping in Medan
I seriously regret not going to the animal markets in the city of Medan, on Indonesia's island of Sumatra. I went through Medan twice, but didn't realize what I might have learned about the illicit animal trade if I'd stopped and snooped around. As it turns out, a lot of the primates for sale in Jakarta were caught on Sumatra, a less populated and more forested island than the island of Java, where Jakarta is.  So Javan dealers acquire wildlife from Medan (or from Borneo) to supply the huge markets of Jakarta, markets like Pramuka. 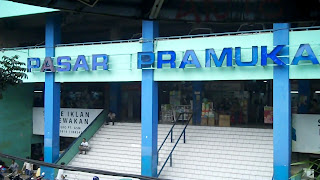 A great bit of sleuthing
The diligent Chris Shepherd of TRAFFIC surveyed the wildlife markets of Medan sixty-six times between 1997 and 2008. During that period, Shepherd observed 1,953 primates of 10 species for sale, most of which are recognized as threatened to varying degrees by the IUCN Red List of Threatened Species.  Those 10 species were the greater slow loris, long-tailed macaque, pig-tailed macaque, silvered leaf monkey, ebony leaf monkey, Thomas's leaf monkey, Sumatran leaf monkey, Siamang, agile gibbon, and white-handed gibbon. 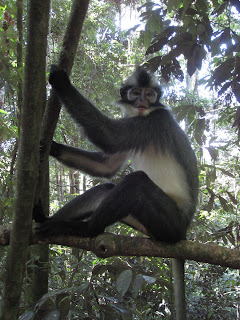 Thomas's leaf monkey in a Sumatran national park, a species openly for sale in Medan. Photo by Sally Kneidel 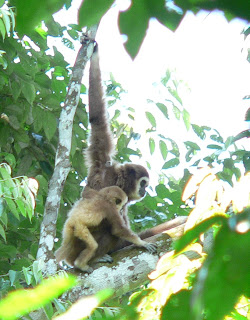 White-handed gibbons in the treetops of Sumatra. This species was also seen in a Medan market by Chris Shepherd. Photo by Sally Kneidel

Shepherd made the effort to cultivate relationships with Medan dealers so they would talk to him about trends and sources. The dealers told him that high-profile species such as orangutans drew the attention of law-enforcement officers, but other totally protected species such as the loris rarely did. The macaques and other most common species were completely ignored by enforcement agencies, although according to Indonesian law, no primates may be legally harvested for commercial purposes.  Given the absence of enforcement, it's not surprising that the dealers expressed to Chris little fear of prosecution.  The dealers also felt no need to get the permits that are legally required to sell wildlife of any kind in Indonesia.  According to the Medan dealers Shepherd interviewed, primates are in demand and sell very quickly. Customers pay more for rare species, thus increasing the incentive for trappers to target the rare and threatened.

What's going on with the legal protection of these animals?
Indonesia is a lovely and deeply exciting country, but it does have a reputation for government corruption, bribery, and generally ineffective law enforcement. I was told several times that if I got a traffic ticket, I should just pay the policeman and that would be the end of it. Many wildlife dealers told me that animals purchased at the markets could be smuggled through airports by paying the security screeners, if they happened to say anything. I didn't test either of these assertions, but heard these comments so many times, I concluded there must be some truth to them. Since returning home, I've learned that academic studies confirm the weak enforcement of laws in Indonesia.  Given the lack of financial resources in the country, it's not that surprising.

Recommendations from an expert
Chris Shepherd closed his 2010 paper on the illegal primate trade in Indonesia with recommendations to address the problem of illegal sales of protected primates.He says that Indonesia has adequate laws and regulations to protect primates from over-exploitation. He recommends that the Natural Resources Conservation Agency in North Sumatra should be encouraged to monitor wildlife markets frequently and to take action against individuals involved in capturing and selling primates illegally. Persons illegally keeping or trading primates should be prosecuted and given maximum sentences, and as a deterrent to others, the prosecutions and punishments should be widely publicized. Furthermore, markets where illegal trade in wildlife occurs should be closed down by appropriate authorities. I agree with that, for sure.

Can promotion of eco-tourism help too?
Most humans consider animals to exist for our exploitation: as food, beasts of burden, companions, or commodities for profit.  But eco-tourism provides a new category. Animals, protected and nurtured in their own habitats, can become a livelihood - a livelihood that can be especially valuable in impoverished countries like Indonesia. True, a little delayed gratification might be required to cultivate a family livelihood that can sustain generations, as opposed to a handful of cash today.

It may be working in Bukit Lawang
I stayed in the small village of Bukit Lawang, a Sumatran town next to Gunung Leuser National Park. Bukit Lawang is a good example of an entire village cashing in on the tourists who come to see wildlife in the park, mainly primates. Some families run guesthouses, some hire out as forest guides, some work in restaurants, or operate kiosks that sell drinks and snacks.  Poaching of animals and plants is still rampant in Gunung Leuser National Park. But since poverty and unemployment are cited as major drivers of poaching, I'm guessing that villagers employed in eco-tourism are less enthusiastic about poaching than they might have been at one time. It would be an interesting study, I think - do people making a living in eco-tourism change their attitudes about illegally capturing or selling wildlife? Does anyone know the answer to that?

Another piece of the solution
For anyone who wants to help, consider making a donation or offering volunteer work to TRAFFIC, a great organization working hard to combat the illegal trade in wildlife. TRAFFIC has some fantastic reports, many by Chris Shepherd or Vincent Nijman, available for free download on their website. Or contribute to the efforts of Greenpeace, an NGO working to protect the forests and wildlife habitats of Southeast Asia.  Another option is Indonesia's own ProFauna, an NGO working on behalf of Indonesian wildlife.