My mom was a meat, eggs, and milk gal. To her way of thinking, animal protein was the key to good health. Breakfast was bacon, eggs, and milk, period. If my brothers and I were running late for school, she made us gulp down a blend of raw eggs and milk. I loathed that "yellow milk."

Things have changed since then. My parents both died of cancer and my own children are in their twenties. When my two kids were teenagers, we gave up meat as a family and later gave up eggs and cartons of dairy milk - for environmental, humane, and health considerations.

For a while I continued to rationalize eating cheese and ice cream. I told myself it was okay because the cows weren't killed, they were just milked. But while researching and writing our book Veggie Revolution, my daughter Sadie and I learned the truth about dairy cows. It's not a pretty picture - in terms of the planet, the cows, or our health. 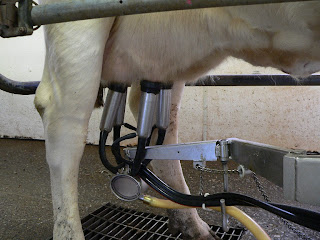 A dairy cow at a milking machine. Photo: Sally Kneidel

Humane considerations: "A cow is just a milk factory" he said with a smirk

A dairy scientist we interviewed at N.C. State University told us, "A dairy cow is just a milk factory.  There's not much quality of life." He's right. Modern dairy cows are among the most exploited of all factory-farmed livestock. In order to offer milk at competitive prices in supermarkets, dairymen today push the cows to their physiological limits to produce as much milk as their bovine bodies possibly can. Whereas cows 100 years ago could produce milk for a farmer's family for 10 to 12 years, the typical dairy cow nowadays burns out after only 3 years of milking. She wears out for four reasons: 1) she's pregnant for nine months every year, 2) she's milked for 10 months every year, in spite of being pregnant, 3) most dairy cows are given injections of the hormone BST (also called BGH) to maximize milk production, and 4) her leg joints give out from standing on concrete while she's heavy with pregnancy and a full udder.

So when she loses her ability to walk, or fails to become pregnant, or her milk production drops too low, she's "culled from the herd" and slaughtered. Her meat is sold for low-quality packaged beef products such as potted meat or beef hot-dogs.About 30% of the herd at a conventional dairy is "culled" every year.


Veal is the male calves of dairy cows

Eating dairy products is not more humane than eating beef. Beef cattle spend 5 or 6 comfortable months with their mothers at pasture before heading to the factory-like feedlot to be fattened for slaughter.  Whereas, male calves of dairy cows are often kept tethered and immobile beginning 24 hours from birth, to be sold in a few months as veal. (Veal is muscles that have had no exercise whatsoever; the meat is pale and tender as a result.) The female calves of dairy cows become impregnated at about 1.5 years of age and go "on the milk string" by their 2nd birthday. Calves of both genders are separated from their mothers after 24 hours so the mother's milk can be sold to humans. 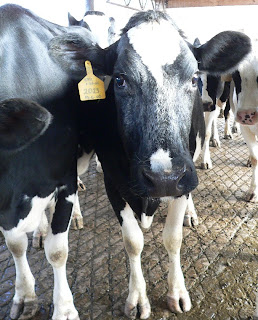 Dairy cows make a lot of waste. One beef steer makes 50-60 lbs of waste per day, but each dairy cow makes about 120 lbs per day, because they're older and bigger. (Beef cattle are slaughtered before or near their first birthday.) Some dairies these days have as many as 1000 dairy cows.Their waste is flushed into open-air lagoons, which can be 25 feet deep and as large as several football fields.These lagoons can spill over during storms, can crack and leak into groundwater. Nitrate contamination of ground and surface waters (and wells) near  livestock-waste lagoons is commonplace and is even legally allowed up to certain limits, although nitrates are toxic for human consumption.  Nitrates and phosphates also cause eutrophication of streams and lakes downhill from the lagoons, which means the nutrients fuel algal blooms that subsequently suck all the oxygen out of the water, suffocating fish and aquatic invertebrates.


51% of greenhouse gases are from livestock

In addition to the waste issue is the fact that the livestock sector worldwide generates 51% of all greenhouse gases - that includes methane from manure, CO2 from the burning of forests to raise livestock feed or to graze the animals, CO2 from the transport of feed or refrigerated animal products, etc. (That figure is from a recent analysis by World Bank scientists, "Livestock and Climate Change," published by Worldwatch institute.)

The link between cancer and dietary hormones, especially estrogen, is a major source of concern among scientists. According to Harvard scientist Ganmaa Davaasambuu, a number of studies have correlated the consumption of milk and cheese with higher rates of hormone-dependent cancers (breast, testicular, prostate). Milk from a pregnant cow contains up to 33 times more estrogen and 10 times more progesterone than milk from a non-pregnant cow.  In nomadic societies like Mongolia, where cows are milked only 5-6 months per year, the hormone content of milk is relatively low. The Western practice of keeping cows confined in large numbers and milking them 10 months per year is relatively recent. Science News article on milk, hormones, and cancer.
Photo: Sally Kneidel
Male hormones (androgens) in cows' milk are cause for concern too. In a recent report in Science News, physician F. W. Danby from Dartmouth Medical School said that certain androgens in cows' milk have the capacity for increasing the number of estrogen receptors in the human body. Extra receptors allow more estrogen - including any from milk - to affect cellular machinery that can turn tumor growth on.  Hormones in cows' milk "are being poured into a system that didn't anticipate them," said Danby, and can't eliminate them effectively.
The same Science News report goes on to say, "One of the most provocative aspects of the milk story is its impact on insulinlike growth factor 1. Many studies have linked elevated concentrations of IGF-1 with cancer risk. Not only is milk a rich source of the substance, but people who drink milk also end up with more IGF-1 in their blood."  Incidentally, I read in another article today that cows injected with BST have more IGF-1 in their milk. Since the year 2000, BST has been banned in Canada, the European Union, Australia, and New Zealand. But it's still legal and widely used here in the US.  National Dairy Council lobbyists can be thanked for that.


Do we need cows' milk for good health?

The Science News article concludes with a comment on milk from oncologist Michael Pollak of McGill University:  "Because the body of knowledge about this beverage’s human bioactivity is still in its infancy, people may just have to employ the precautionary principle. In the absence of definitive [safety] data—or the presence of an adverse effect which may be small—you have to decide: Is there anything good about milk? And other than developing children and malnourished adults, people probably don’t need milk."

No indeed. Calcium and protein are both easily available from plenty of plant-based sources. 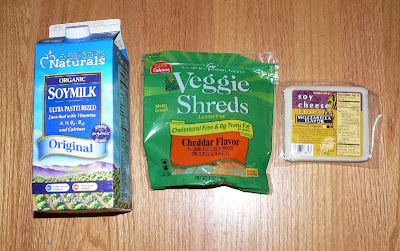 And, yes, we've given up dairy cheese. We found some good plant-based cheese we like at Trader Joe's. There's really no excuse anymore for me. Six years ago, a woman who works for PETA said to me, on the subject of going vegan: "It's not that hard."  What she said was so simple, but it stuck with me. No, it really isn't that hard. And as a person who loves animals, who frets endlessly about our planet, and who wants to stay alive as long as possible....it's one of those small things that I can do, that anyone can do, and if everyone did it, the impact would be huge.

I love your articles and generally just read without commenting. I was skimming this morning and wanted to let you know that neither of the cheeses you posted are vegan, unless they've changed their formulas. They both contain casein, an animal milk protein, which of course makes them not vegan. I suggest trying Daiya (the best imo) or Follow Your Heart brands.

Wow, I did not know that. Thanks for telling me Heather. I'll look for Daiya and Follow Your Heart. I appreciate your posting that info for other readers too.

Daiya cheese is the BEST vegan cheese ever. If you live close to a Whole Foods, they will whip up a vegan pizza with daiya cheese super yumminess :)