Review of "The Cove," an A+ documentary of Japan's dolphin slaughter 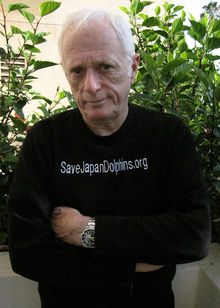 Ric O'Barry, star of "The Cove"
Crazy
I heard Bruce Springsteen say once that the people we remember are the people who care enough to be crazy.  I thought about that when I saw the Oscar-winning documentary "The Cove."  It's the story of one man's passionate commitment to protecting dolphins, his willingness to sacrifice even his life for his cause.  The film is also about Japan's indifferent and systematic slaughter of dolphins, but what sets it apart is the tale of Ric O'Barry. 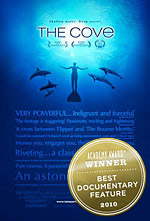 The 2009 movie rivals any espionage thriller for suspense and intrigue. The setting is the Japanese coastal town of Taiji, where local fishermen carry out a secretive and brutal daily dolphin round-up that O'Barry finally manages to catch on film.

Former "Flipper" trainer
As we learn during the movie, O'Barry is a former dolphin trainer. In the 1960s he helped catch and train the wild dolphins that shared the starring role in the popular television series "Flipper." The show spawned a worldwide fascination with dolphins, leading to a proliferation of marine parks that feature dolphin performances and opportunities to "swim with the dolphins." 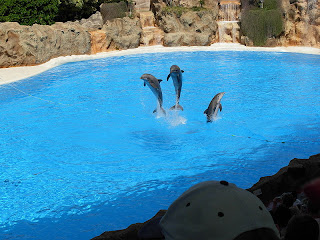 Trained dolphins performing at a marine park
In the documentary, O'Barry relates a personal experience that completely changed his perspective on keeping dolphins in captivity - he believes that a dolphin he was training committed suicide in his arms by refusing to open her blowhole to breathe. The experience affected him so profoundly that his life's mission is now to protect the animals he once captured.

"Dolphin drive hunting"
On the coast of Taiji, Japan, where the action takes place, dolphins are driven by nets and small boats into a cove each morning before dawn, a process known as "dolphin drive hunting." In the cove, the "best" dolphins are selected and captured for sale to marine parks, a major source of income for the village. The rejected dolphins, including the very young, are killed by knives and spears from the small boats, then are hauled aboard the boats and taken ashore to be butchered for meat. 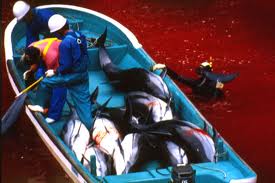 a dolphin drive hunt
When O'Barry and his co-workers (including members of the Oceanic Preservation Society) try to film the carnage in the cove, they are chased by hostile villagers and by local police. Not to be deterred, O'Barry and cohorts make fake rocks to conceal their cameras, which are then strategically placed on the shore. With the hidden cameras, they obtain plenty of footage of the daily drive and subsequent massacre. At the end of the documentary, O'Barry strolls around a meeting of the International Whaling Commission carrying a small flat-screen TV showing footage of the Taiji dolphin slaughter. Before long, he's ousted from the room.

Toxic to school children
At the time of the filming, the dolphins' flesh was served to children in the local schools of Taiji or was sold in Taiji supermarkets, but it was labeled as something else. As revealed in the film, dolphin flesh is dangerously high in mercury because dolphins eat fairly high on the food chain. Which means they ingest the mercury already eaten by the fish that they eat - thus concentrating the mercury in the dolphins' flesh. (Mercury gets into water from the airborne emissions of fossil-fuel-burning power stations.)

dolphin meat in supermarkets
As a result of O'Barry's and the other activists' efforts, dolphin meat is removed from local school lunches. And in the 2009 dolphin season in Taiji, at least some of the rejected dolphins were released rather than slaughtered. But I learned from this documentary that whaling (including dolphins) is a long-held cultural tradition in Japan, and the Japanese have a deep-seated reluctance to let it go. They won't readily concede their right to harvest cetaceans, regardless of who's exerting the pressure and regardless of conservation statistics. If they are indeed so wedded to their traditions, then their resistance to international whale-protection measures is a little easier to comprehend. Not easier to accept, but easier to understand. Still.....where does that leave conservationists? Or cetaceans? Who will care about cultural traditions when species disappear? 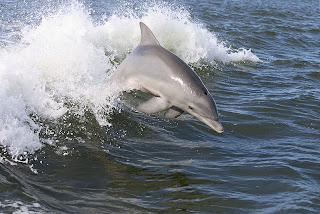 Bravo, O'Barry
I recommend "The Cove" to anyone who cares about the future of the planet's wildlife, especially marine-biology aficionados.  Or to anyone who likes a good story of dogged determination, and ingenuity in resolving obstacles.  Hats off to Ric O'Barry.

Btw, the film is available from Netflix, and got a 96% rating on rottentomatoes.com.

Get involved....
If you'd like to help Ric's cause, go to this website about the movie and the plight of the dolphins.

For more info... go to Whalewatch, the Oceanic Preservation Society, the High North Alliance
or the International Whaling Commission.

Although I love dolphin shows, not ones that support this horrible abuse.